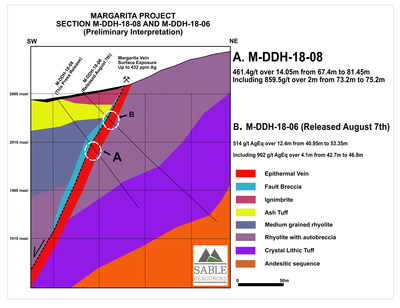 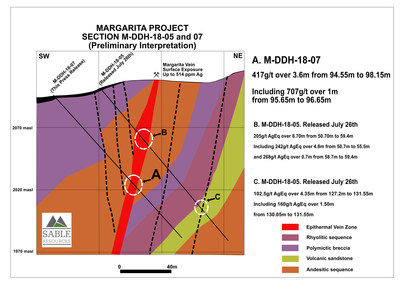 "The 14m intercept in drillhole M-DDH-18-08 represents our widest intersection to date with consistent average grades in excess of 400 grams per tonne silver equivalent", commented Ruben Padilla, VP Exploration of Sable Resources. "We are also greatly encouraged by gold values in these holes up to 3g/t coincident with high base metal values with zinc to 4.5% and lead to 2.4%. Sable now has five holes into the Margarita structure with a weighted average grade of 420g/t AgEq over an average width of 8.6m, and a confirmed strike length of 500m down to 80m depth from surface."

The initial drill program of 12 holes is now complete with holes M-DDH-18-09, 10, 11, 12 awaiting results. True widths are estimated to be 90% of the intercept based on vein to core angle. Detailed drill results, location plan, sections and core photos are available from the Sable website. Silver equivalent is calculated based on based on USD15.50 per Oz for Silver, USD 0.95 per pound for Lead and USD1.20 per pound for Zinc and USD1200 for gold.

Sample preparation was carried out by ALS Chemex de Mexico S.A. de C.V., a subsidiary of ALS Minerals, at their laboratory at Chihuahua, State of Chihuahua, Mexico. Analyses were carried out at their laboratory in North Vancouver, British Columbia, Canada. Sample preparation was by drying in an oven at a maximum temperature of 60°C, fine crushing of the sample to at least 70% passing less than 2 mm, sample splitting using a riffle splitter, and pulverizing a 250 g split to at least 85% passing 75 microns (code PREP-31).

Luis Arteaga (M.Sc) P. Geo. Exploration Manager for Sable Resources and the Company's Qualified Person as defined by NI 43-101 has reviewed and approved the technical information in this news release.