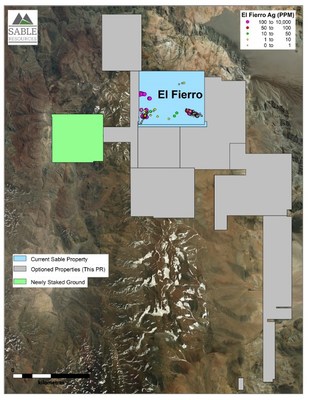 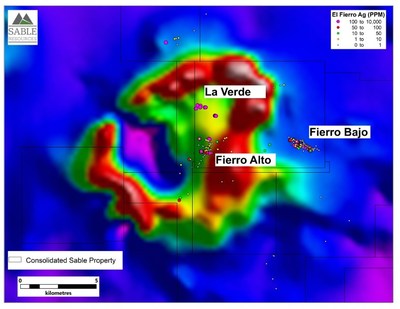 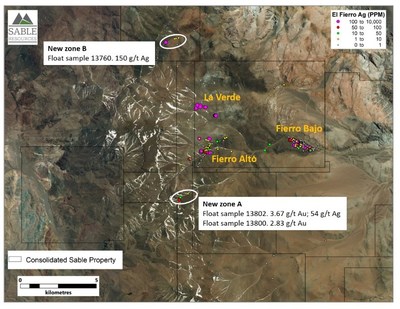 Through the signing of two option agreements ("Agreement A" and "Agreement B", collectively the "Agreements) with arm's length parties in Argentina, Sable has added a group of ten claims comprising 36,131 hectares of strategic ground surrounding El Fierro project; additionally the company has staked 4,206 hectares of open ground west of the Fierro Alto zone. Location of the new claims is shown in Figure 1.

Ruben Padilla, President and CEO of Sable stated, "With the acquisition of this highly prospective ground, we have expanded and consolidated our position at the El Fierro Project to advance Sable's systematic exploration approach and increase chances to discover a district scale mineral system."

The new properties host several alteration zones and multiple showings that will see exploration activity in the upcoming months.  With the acquired claims Sable also controls the majority of a large regional magnetic anomaly that could be indicative of a porphyry system in depth (Figure 2). Some grab samples collected during preliminary recognition in two of the new areas have returned encouraging values of up to 3.67 g/t Au, and 150 g/t Ag in different localities shown in Figure 3.

Under the terms of Agreement A, Sable can acquire 100% of two claims for a total cost of U$81,000 in annual payments as shown in Table 1.  Under the terms of Agreement B, Sable can acquire 51% of eight claims completing payments for a total of U$640,000 in four years as presented in Table 2.  Subsequent to these payments, and during the following two year period, Sable can acquire the remainder 49% of the properties by making a single payment of U$900,000. Additionally, the optionor will be granted a royalty of 1.5% of the Net Smelter Returns (NSR) from which Sable will be entitled to purchase 0.5% for a purchase price of U$1,500,000 at any moment after reaching 100% interest in the properties.

Table 1. Distribution of payments for option agreement A.

Table 2. Distribution of payments for option agreement B.

The Company notes that selected grab samples are not necessarily representative of the mineralization hosted at El Fierro. Maps associated with this press release are available on Sable's website (www.sableresources.com).

Sable is providing an opportunity for shareholders and other interested parties to participate in a Webinar to be held at 4 pm ET on Wednesday, November 18th.  To register, please click on the following link - https://zoom.us/webinar/register/WN_NqXKYbYMSxe4fK1aB1yCcg

The El Fierro Project is located 250 km northwest of San Juan, Argentina and 120 km north of Sable's Don Julio Project in one of the best-known historical mining districts in the San Juan province.  The El Fierro Project consists of three main known mineralized areas, Fierro Alto, Fierro Bajo, and La Verde over an area of 8km by 4km.  The three areas host a number of old artisanal mining workings where silver, lead and zinc were intermittently mined since the late 1800's until the 1960s decade; the property has never been drilled.  Sable currently controls 46,391 hectares covering all the historically mineralized areas and additional highly prospective ground over a large magnetic anomaly.

Sample preparation for projects in Argentina is carried out by ALS Chemex Argentina, a subsidiary of ALS Minerals, at its facility located in Mendoza, Argentina. Analyses are carried out at their laboratory in Lima, Peru. Sample preparation includes drying in an oven at a maximum temperature of 60°C, fine crushing of the sample to at least 70% passing less than 2 mm, sample splitting using a riffle splitter, and pulverizing a 250 g split to at least 85% passing 75 microns (code PREP-31).

Luis Arteaga M.Sc. P.Geo., Vice President Exploration is the Company's Qualified Person as defined by NI 43-101. He has reviewed and approved the technical information in this news release.

Certain statements contained in this press release constitute forward-looking information. These statements relate to future events or future performance. The use of any of the words "could", "intend", "expect", "believe", "will", "projected", "estimated" and similar expressions and statements relating to matters that are not historical facts are intended to identify forward-looking information and are based on Sable's current belief or assumptions as to the outcome and timing of such future events. Actual future results may differ materially. Although such statements are based on reasonable assumptions of Sable's management, there can be no assurance that any conclusions or forecasts will prove to be accurate.

While Sable considers these assumptions to be reasonable based on information currently available, they may prove to be incorrect. Forward looking information involves known and unknown risks, uncertainties and other factors which may cause the actual results, performance or achievements to be materially different from any future results, performance or achievements expressed or implied by the forward-looking information. Such factors include risks inherent in the exploration and development of mineral deposits, including risks relating to changes in project parameters as plans continue to be redefined, risks relating to variations in grade or recovery rates, risks relating to changes in mineral prices and the worldwide demand for and supply of minerals, risks related to increased competition and current global financial conditions and the COVID-19 pandemic, access and supply risks, reliance on key personnel, operational risks, and regulatory risks, including risks relating to the acquisition of the necessary licenses and permits, financing, capitalization and liquidity risks.