Production highlights for Q4 2017 as compared to Q3 2017 and the Company's preliminary economic assessment "Plan" (see description below) are: 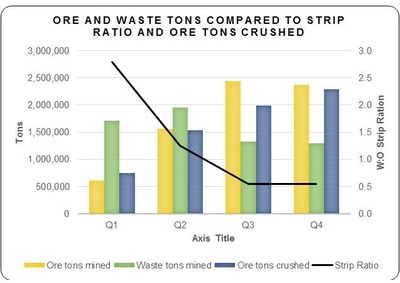 Mining and crushing rates are now consistently outperforming the original Plan by 30 percent and 27 percent respectively.  As a consequence, the crusher throughput has been increased to 750,000 tons per month of ore crushed and stacked to the South Heap Leap Pad on a go-forward-basis, representing a 25 percent increase over the original Plan.  The crusher continues to demonstrate operational performance above 750,000 tons per month, and a study to determine the optimal throughput and associated capital requirements will be completed in 2018.

Gold ounces placed on the pad averaged 8,478 ounces of gold placed per month in Q4.  Projected recoveries of 71 percent remain consistent with gold recoveries achieved to date.  Based on gold ounces stacked and gold ounces poured, the South Heap Leach Pad (SHLP) is performing with 70 percent of the recoverable gold ounces being produced from the primary leach cycle.  The remaining 30 percent will be produced during secondary and tertiary leach cycles.  To date, only primary leaching has occurred to maximize cash flow and determine the optimal leach cycle. Primary, secondary and tertiary leach cycles will begin in 2018 as the second lifts of ore are placed on top of the first lift.

Based on the Company's six months of operating experience, differences have become apparent between current gold production and that forecast under the Plan.  These differences relate to the six-month construction/weather delay, the operational challenges associated with the mining fleet in Q1 and Q2, and a recognition that the process of putting tons under leach to the production of gold dore' takes 60 days.  This impacts solely the timing of gold production, not the amount of gold which is ultimately produced.

All four newly purchased CAT 785C haulage trucks are in operation.  In addition, the planned Carbon-in-Column (CIC) plant expansion is complete.  The newly installed second CIC plant will nearly double the processing capacity with throughput increasing from 18,000 solution tons per day to 30,000 solution tons per day.  The additional flow will allow for more square footage to come under leach and increase gold production. The additional CIC capacity will be operational in early Q1 of 2018.

Based on the above planned operational performance of the mine and the crusher and the actual versus model recovery and predictability of the South Heap Leach Pad, the Company has determined that the Florida Canyon mine achieved commercial production in December 2017.

"Plan" refers to the Company's preliminary economic assessment effective March 16, 2016, and dated January 27, 2017, titled "Amended Technical Report – Preliminary Economic Assessment for the Florida Canyon Mine, Pershing County, Nevada" available on the Company's website and under the Company's profile at www.sedar.com.

Mr. William Howald, AIPG Certified Professional Geologist #11041, Rye Patch Gold's CEO and President with a BSc. in Geological Engineering, is a Qualified Person as defined under National Instrument 43-101. He has reviewed and approved the contents of this news release.

The combination of operations and organic growth along a major Nevada gold trend positions Rye Patch as an emerging mid-tier gold producer with tremendous value‑added potential. For more information, please visit our website at www.ryepatchgold.com.

On behalf of the Board of Directors'William Howald'William C. (Bill) Howald, CEO & President

This news release contains forward-looking statements relating to future plans and objectives of the Company, future deliveries of gold, proposed operations of the Company including mine development, funding requirements, timeline for commercial production, future events and conditions and other statements that are not historical facts, all of which are based on assumptions and subject to various risks and uncertainties. The Company's actual results, programs and financial position could differ materially from those anticipated in such forward‑looking statements as a result of the following assumptions and risk factors, some of which may be beyond the Company's control. These assumptions and risk factors include: future deliveries of gold pursuant to the forward gold price contract facility, the achievement of mine redevelopment plans and achievement of commercial production; the availability of funds; the financial position of Rye Patch; the timing and content of work programs; the results of exploration activities and development of mineral properties; the interpretation of drilling results and other geological data; the reliability of calculation of mineral resources; the reliability of calculation of precious metal recoveries; the receipt and security of mineral property titles; project cost overruns or unanticipated costs and expenses; fluctuations in metal prices; currency fluctuations; and general market and industry conditions.

Forward-looking statements are based on the expectations and opinions of the Company's management on the date the statements are made. The assumptions used in the preparation of such statements, although considered reasonable at the time of preparation, may prove to be imprecise and, as such, undue reliance should not be placed on forward-looking statements.  As a result, the Company cannot guarantee that the Florida Canyon mine redevelopment and achievement of commercial production will be completed on the terms and within the time disclosed herein or at all.