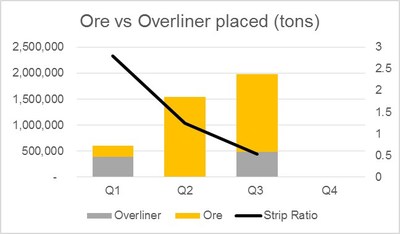 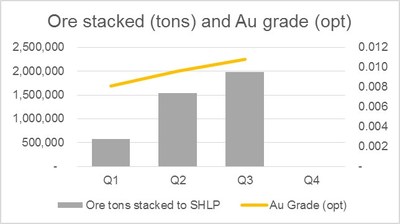 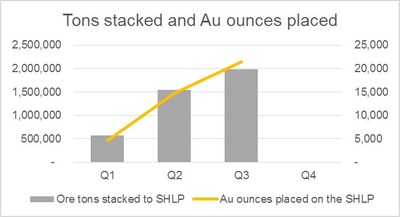 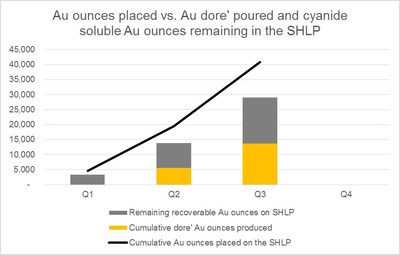 "Gold production realized in Q3 was below expectation for the reasons outlined in our September 14th news release" stated Rye Patch President and CEO William C. Howald.  "The corrective measures put in place by management as described in that news release are now having a positive impact on improving gold output with the goal of realizing commercial production in Q1, 2018.  Other aspects of the mine are performing well above plan.  We are pleased with the improved fleet availability, mining and crushing rates, and the positive reconciliation in grade and tons with the resource block model.  In addition, the gold recovery is behaving as modelled." added Howald.

Mining, Ore and Overliner PlacementMining, strip ratio and crusher rates continue to improve and are now consistently outperforming plan. During the period, a 57 percent increase in ore tons mined above plan was achieved, and an overall reduction in waste tons positively affected the strip ratio.

As outlined in the September 14, 2017, news release, ore and overliner are currently being stacked simultaneously. The operation expects to complete the overliner on section 1B of the SHLP by the middle of December followed by ore stacking only. As each section of overliner is approved, ore is stacked and readied for irrigation.

Gold Ounces Placed on SHLP, Gold Grade, and Gold Dore' PouredA combination of the crusher exceeding plan and a gradual increase in combined grade has resulted in an increase of 45percent more ounces being placed on the pad in Q3 compared to Q2.  7,125 gold ounces per month were placed on average for Q3, and year to date, a total of 40,789 ounces have been placed.

Overall grade continues to increase, is up 10 percent this quarter, and will remain steady until the sub ore grade overliner is completed in December. (The overliner material is typically below ore grade as it is selected primarily because it meets strict design criteria as the rock that creates a drain blanket between the ore and the plastic liner.) The overall grade is expected to increase when placement of the overliner on Section 1B is complete.

The transition from the winter contingency pad, Section 1A, to the main part of the SHLP (Section 1B) has meant that we have been able to start building out larger cells, which will in turn lead to higher and more stable monthly recoveries. As a result, over half of all the ounces placed (52 percent) for the year on the SHLP occurred in Q3 (21,376 ounces from 1.98 million tons).

The first of the larger cells was placed under irrigation in mid-September and will begin to yield gold from the first part of its leach curve in October. As more of the larger leach cells are placed through to the end of the year and we begin to experience the layering impact of each cells' recovery curve, we anticipate that gold ounces and total recoveries will achieve commercial production goals by Q1, 2018.

Gold dore' production continues to demonstrate a positive upward trend with a quarter on quarter increase of 13 percent. The leach kinetics are showing consistency and tracking with the historical recovery data from the original Florida Canyon heap leach pad.  As discussed above, the transition to the main Section 1B of SHLP will result in higher levels of production and fewer fluctuations month to month.

Company made its first repayment to Macquarie Bank under the current terms of its Credit Agreement.

Mr. William Howald, AIPG Certified Professional Geologist #11041, Rye Patch Gold's CEO and President with a BSc. in Geological Engineering, is a Qualified Person as defined under National Instrument 43-101. He has reviewed and approved the contents of this news release.

The combination of operations and organic growth along a major Nevada gold trend positions Rye Patch as an emerging mid-tier gold producer with tremendous value-added potential. For more information, please visit our website at www.ryepatchgold.com.

On behalf of the Board of Directors

Forward-Looking StatementsThis news release contains forward-looking statements relating to future plans and objectives of the Company, future deliveries of gold, proposed operations of the Company including mine development, funding requirements, timeline for commercial production, future events and conditions and other statements that are not historical facts, all of which are based on assumptions and subject to various risks and uncertainties. The Company's actual results, programs and financial position could differ materially from those anticipated in such forward‑looking statements as a result of the following assumptions and risk factors, some of which may be beyond the Company's control. These assumptions and risk factors include: future deliveries of gold pursuant to the forward gold price contract facility, the achievement of mine redevelopment plans and achievement of commercial production; the availability of funds; the financial position of Rye Patch; the timing and content of work programs; the results of exploration activities and development of mineral properties; the interpretation of drilling results and other geological data; the reliability of calculation of mineral resources; the reliability of calculation of precious metal recoveries; the receipt and security of mineral property titles; project cost overruns or unanticipated costs and expenses; fluctuations in metal prices; currency fluctuations; and general market and industry conditions.

Forward-looking statements are based on the expectations and opinions of the Company's management on the date the statements are made. The assumptions used in the preparation of such statements, although considered reasonable at the time of preparation, may prove to be imprecise and, as such, undue reliance should not be placed on forward-looking statements.  As a result, the Company cannot guarantee that the Florida Canyon mine redevelopment and achievement of commercial production will be completed on the terms and within the time disclosed herein or at all.