TORONTO, June 5, 2019 /CNW/ - RNC Minerals (TSX: RNX) ("RNC") is pleased to announce another high-grade gold discovery at its Beta Hunt Mine, where the company has encountered coarse gold in quartz veins on the level beneath the Father's Day Vein discovery. 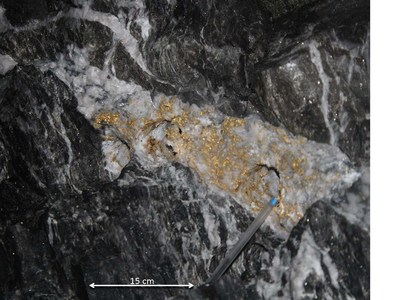 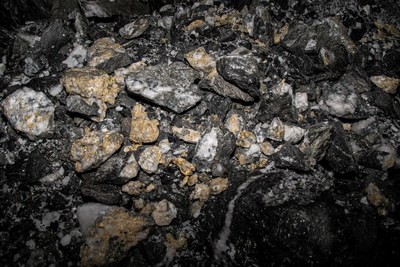 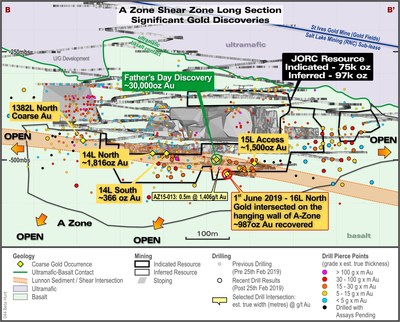 An estimated 987 oz of coarse gold has been recovered in 238 kg of rock from a series of veins. The accuracy of this estimate at this stage is considered to be +10%/-25% based on the measurement of the estimated gold content for each of the samples by specific gravity determinations. RNC will provide a final estimate of ounces recovered once this material has been processed.

"We are thrilled to have encountered high grade coarse gold in the area below the Father's Day Vein. This most recent discovery provides further support for our geological model that predicts that the areas where the mineralized shear zone and sedimentary sulphides intersect are capable of generating "Father's Day Vein" style coarse gold mineralization, and proves that such areas extend at least 25 metres below the Father's Day Vein discovery," said Mark Selby, President and CEO of RNC Minerals. "We look forward to continued mining in this highly prospective area with the potential to find other veins containing coarse gold. As material developments occur, we will continue to update the market."

As noted in RNC's news release of May 15, 2019, mining has been advancing along the main A Zone shear on the 16 level toward a point approximately 25 metres below the Father's Day Vein discovery on 15 Level (Figure 3). RNC's focus on mining on 16 level has been driven by RNC's geological model, which predicts that Father's Day Vein style coarse gold is likely to occur where mineralized shears intersect sedimentary sulphides and by the occurrence of a diamond drill intersection of 119 g/t over 6.40 m, including 1,406 g/t over 0.50 m in hole AZ15-013 located 7 metres below the Father's Day Vein occurrence (see RNC's news release of May 15, 2019 and figure 3 below).

The high-grade gold structures were encountered in the A Zone 16 level Ore Drive at the Beta Hunt Mine as it entered the area where the down-plunge extensions of Father's Day Vein style mineralization were projected to occur This is where the A Zone shear intersects sedimentary sulphides on the 16 level Ore Drive. (see figures 1 and 2).

The recovered coarse gold quantities were determined and compiled at the Beta Hunt mine site by Beta Hunt Mine staff who are full time employees of Salt Lake Mining Pty Ltd, a 100% owned subsidiary of RNC.

Where Au_g  is the contained gold weight of the rock specimen in grams, Gold SG is the specific gravity of gold and equals 19.3, Dry Weight_g is the dry weight in air of the rock specimen measured via laboratory scale adjusted for container mass, Water Mass ml is the mass of water displaced by the rock specimen measured by placing the rock in water and weighing the displaced water, Host Rock SG is the estimated specific gravity of the host rock (gangue material in the specimen) based upon interpreted relative proportions of quartz and basalt in the host rock and in this case ranges from 2.7 to 2.8.

The error in this estimation method is primarily related to the estimation of Host Rock SG.  The values determined for Au_g are considered to be accurate within a range of +10% to -25% of the determined value.

RNC has a 100% interest in the producing Beta Hunt gold mine located in Western Australia where a significant high grade gold discovery - "Father's Day Vein" - was made. RNC is currently completing a 40,000 metre drill program, the results of which will be incorporated into an updated NI 43-101 compliant Mineral Resource Estimate and mine plan targeted for Q2 2019. Beta Hunt gold resource potential is underpinned by multiple gold shears with gold intersections across a 4 km strike length which remain open in multiple directions adjacent to an existing 5 km ramp network. RNC also has a 28% interest in a nickel joint venture that owns the Dumont Nickel-Cobalt Project located in the Abitibi region of Quebec which contains the second largest nickel reserve and ninth largest cobalt reserve in the world. RNC owns a 27% interest in Orford Mining Corporation, a mineral explorer focused on highly prospective and underexplored areas of Northern Quebec. RNC has a strong management team and Board with over 100 years of mining experience. RNC's common shares trade on the TSX under the symbol RNX. RNC shares also trade on the OTCQX market under the symbol RNKLF.

This news release contains "forward-looking information" including without limitation statements relating to the completion of the Purchase Option, production guidance and the potential of the Beta Hunt Mine and Dumont Nickel – Cobalt Project.