TORONTO, Dec. 23, 2019 /CNW/ - RNC Minerals (TSX: RNX) ("RNC") is pleased to announce a maiden Gold Mineral Reserve of 310,000 ounces (3.4 Mt at an average grade of 2.8 g/t; see table 2) at its Beta Hunt gold mine located in Kambalda, Western Australia. The Gold Mineral Reserve forms the basis for Beta Hunt's mine plan, which schedules base-load feed to the company's 100% owned Higginsville treatment plant. Along with the Higginsville mine, the company is feeding the 1.4Mtpa plant to 100% capacity. 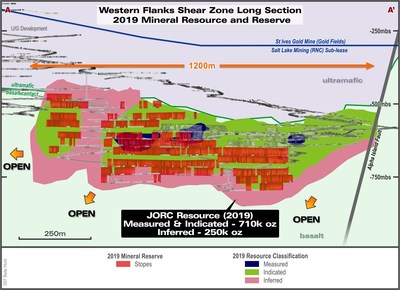 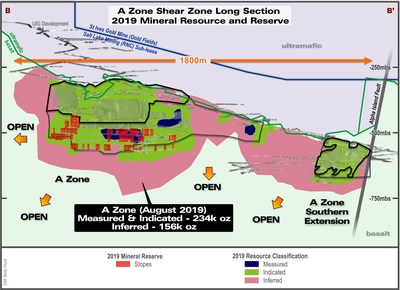 The Maiden Gold Mineral Reserve remains open for potential additions along strike and at depth from both the existing Gold Mineral Resource (underpinning the Mineral Reserve) and from exploration targets that will be drill-tested. These targets will be tested in addition to high-priority targets at RNC's Higginsville mine following the successful renegotiation of the Morgan Stanley royalty which opens up these areas for immediate exploration (see RNC news release dated December 19, 2019).

Paul Andre Huet Chairman and CEO of RNC said, "We are very pleased with the results of the Maiden 2P Gold Reserve at Beta Hunt, which now provides a fundamentally strong basis for a robust production profile moving forward. It is important to note that the Mineral Resource supporting the 2P reserves does not account for any high-grade coarse gold occurrences found at Beta Hunt which we have encountered intermittently in the past. As we have previously stated, these occurrences, when encountered, may provide a boost to production but do not form the basis of our economic mine plan driven by the average grade of the deposit.

Additionally, we believe there is incremental upside to be unlocked via both the drill bit and our on-going cost reduction program at site which remains a key focus for the company moving forward."

Beta Hunt is a mechanised underground mine that has been in operation since 1974 producing nickel, with gold production commencing in 2015. The mine is primarily focused on gold production, with a smaller nickel operation producing from adjacent discrete mineralised zones. Production from gold areas at Beta Hunt is currently 45,000 tonnes of ore per month.

The Beta Hunt Gold Mineral Reserve is reported at a 2g/t cut-off grade and is based on a gold price of US$1,400/oz as well as current mining, processing, administration and royalty costs. Mining is based on a top-down, sub-level open stoping method.

As previously outlined, the high-grade coarse Father's Day style gold occurrences associated with the Shear Zone/Lunnon Sediment intersection horizon are not accounted for in the Gold Mineral Reserve. These occurrences are best considered as a potential periodic significant bonus to mine production.

The Gold Mineral Reserve estimate for both Western Flanks and the A Zone will be detailed in a technical report prepared in accordance with NI 43-101 to be filed on SEDAR within 45 days of the date of this press release.

Mr McLeay is a mining engineer and Fellow of the AusIMM and has sufficient experience that is relevant to the style of mineralization and type of deposit under consideration and to the activity being undertaken to qualify as a Competent Person as defined in the JORC Code, 2012 Edition, and fulfils the requirements to be a "Qualified Person" for the purposes of NI 43-101.

Mr. Stephen Devlin, FAusIMM, Vice President Exploration and Growth for Salt Lake Mining Pty Ltd, a 100% subsidiary company of RNC Minerals, fulfils the requirements to be a "Qualified Person" for the purposes of NI 43-101. Mr.Devlin has reviewed and approved the disclosure of the technical information included in this news release.

About RNCRNC is focused on growing gold production and reducing costs at its integrated Beta Hunt Gold Mine and Higginsville Gold Operations ("HGO") in Western Australia. The Higginsville treatment which plant forms part of HGO, is a low-cost 1.4 Mtpa processing facility which is fed at capacity from RNC's underground Beta Hunt mine and open pit Higginsville mine. At Beta Hunt, a robust gold mineral resource and reserve is hosted in multiple gold shears, with gold intersections along a 4 km strike length remaining open in multiple directions. HGO has a substantial historical gold resource and highly prospective land package totaling approximately 1,800 square kilometers. In addition, RNC has a 28% interest in a nickel joint venture that owns the Dumont Nickel-Cobalt Project located in the Abitibi region of Quebec. Dumont contains the second largest nickel reserve and ninth largest cobalt reserve in the world. RNC has a strong Board and management team focused on delivering shareholder value. RNC's common shares trade on the TSX under the symbol RNX. RNC shares also trade on the OTCQX market under the symbol RNKLF.

Cautionary Statement Regarding the Beta Hunt Mine

The decision to produce at the Beta Hunt Mine was not based on a feasibility study of mineral reserves, demonstrating economic and technical viability, and, as a result, there may be an increased uncertainty of achieving any particular level of recovery of minerals or the cost of such recovery, which include increased risks associated with developing a commercially mineable deposit. Historically, such projects have a much higher risk of economic and technical failure. There is no guarantee that anticipated production costs will be achieved. Failure to achieve the anticipated production costs would have a material adverse impact on SLM's cash flow and future profitability. Readers are cautioned that there is increased uncertainty and higher risk of economic and technical failure associated with such production decisions An updated mineral resource estimate is summarized in the "Technical Report on The Beta Hunt Mine, Kambalda, Western Australia" dated September 17, 2019. It is further cautioned that mineral resources are not mineral reserves and do not have demonstrated economic viability.

This news release contains "forward-looking information" including without limitation statements relating to the mineral resource and reserve estimates and the potential of the Beta Hunt Mine.