TORONTO, Feb. 25, 2019 /CNW/ - RNC Minerals (TSX: RNX) (RNC) is pleased to announce ongoing underground drill results and fourth quarter production results from its 100% owned Beta Hunt Mine. To date, 168 holes have been completed under this drilling campaign, totaling 16,669 metres. Since RNC's January 22 release, assay results have been received for an additional 29 holes, totaling 2,765 metres. The latest drill results at A Zone target both the sediment layer in close proximity to the Father's Day Vein discovery and the southern extension of the resource above the sediment layer. At Western Flanks, drilling continued to define the northern extension of mineralization outside the existing resource, while also tracing the sediment layer. In addition to results presented to date, 93 holes totaling 8,139 metres have been drilled for which results are pending. 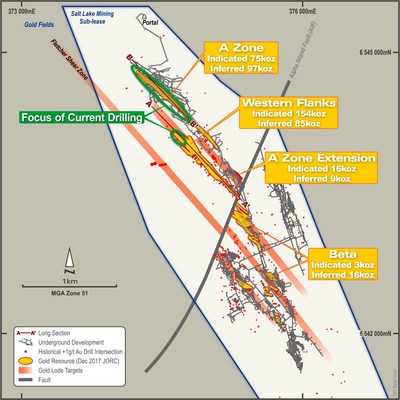 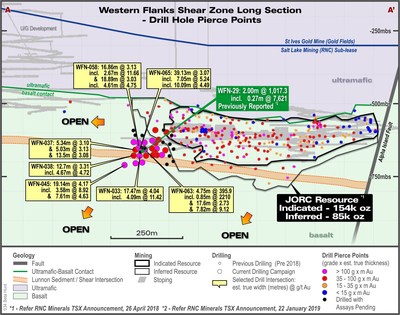 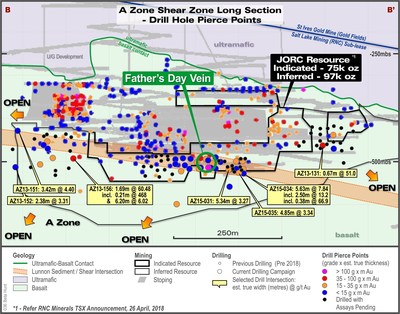 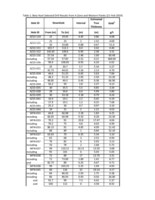 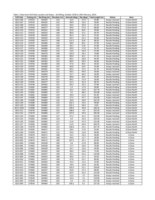 Mark Selby, President and CEO of RNC, commented "The ongoing drill program continues to be successful, delivering on multiple objectives as we work to unlock the tremendous exploration potential at Beta Hunt. The 2,210 g/t intersection within 8 metres of our previously announced record intersection in Western Flanks is further confirmation of the potential of the intersection between the mineralized shears and the property-wide Lunnon sediment layer for further high grade coarse gold discoveries. Drilling in the A Zone continues to extend the resource, with multiple intersections exceeding 4 g/t, including two intersections in excess of 6 g/t and 5.5 metres at the margins of the existing resource. At Western Flanks, multiple wide intersections highlight the scale potential of this shear while containing significant 4 to 6 g/t intervals. We will continue to provide regular updates as this 40,000 metre exploration program advances."

A total of 53 holes totaling 5,870 metres have now been completed at Western Flanks. Drilling is aimed at extending and upgrading the existing resource, with focus around the interpreted position of the sediment layer which has the potential to host high grade coarse gold intersections. Since RNC's  January 22 news release, assay results have been received for a further 7 holes totaling 895 metres. Drilling has again highlighted the coarse gold-sediment association with drill hole WFN-063 yielding an intersection of 2,210 g/t over 0.85 metres (within 395.9 g/t over 4.75 metres) (true width) hosted by quartz-veined pyritic sediment located within 8 metres of the previously released drill intersection in WFN-029, 7,621g/t over 0.28 metres (Figure 2). This result reinforces RNC's theory that the newly discovered sedimentary layer carries the potential for multiple, new, high grade discoveries.

Drilling in A Zone

A total of 115 holes for 10,800 metres have now been drilled along the A Zone shear. Drilling has infilled around the Father's Day Vein and the northern limit and southern limits of the A Zone (see Figure 3).

Since RNC's January 22 news release, assay results have been received for a further 22 holes totaling 1,870 metres. The bulk of drilling to date has been focused around the Father's Day Vein to more clearly understand the geology in this heavily mineralized section of the mine. These results continue to support strong mineralization along strike of the Father's Day Vein, such as 7.84 g/t over 5.63 metres in AZ15-034 including 66.9 g/t over 0.38 metres. This result occurs 90 metres south of the previously reported hole AZ15-013, which returned 1,406 g/t over 0.50 metres true width and is located just 7 metres below the Father's Day Vein.

Drilling is now focused on extending and upgrading the northern and southern margins of the existing resource. Limited results received to date, such as 60.48 g/t over 1.69 metres in AZ15-156 including 468g/t over 0.21 metres associated with the Lunnon sediment in the hanging wall lode, as well as 6.02 g/t over 6.20 metres in the main A Zone lode, provide confidence that the existing resource will be upgraded as further results are received.

Future drilling in the current 40,000 metre program will increasingly focus on infilling and extending resources in A Zone and Western Flanks to support an updated resource expected to be produced by the end of the second quarter. Once the resource drilling is completed in the second quarter, the remaining drilling will test several exploration targets, including the Fletcher Trend.

Mark Selby, President and CEO of RNC, commented, "Record 2018 gold production reflects the tremendous impact from the Father's Day Vein discovery and high-grade coarse gold production. Production in the fourth quarter was in line with our expectations with the previously announced suspension of bulk mining production at Beta Hunt (see RNC news release dated November 28, 2019), as we continue to focus on the exploration program. Production guidance will not be provided until the resource update is completed and a decision to fully restart bulk production is made."

The technical information in this news release relating to drilling results at the Beta Hunt Mine is based on information reviewed by Steve Devlin, who is a Member of the Australian Institute of Mining and Metallurgy. Mr. Devlin is a full time employee of Salt Lake Mining Pty Ltd, a 100% owned subsidiary of RNC, and has sufficient experience, which is relevant to the style of mineralization and type of deposit under consideration and to the activity which he is undertaking to qualify as a Competent Person as defined in the 2012 edition of the "Australasian Code for Reporting of Exploration Results, Mineral Resources and Ore Reserves".

Drill core sampling was conducted by Beta Hunt personnel. Samples are shipped to SGS Mineral Services of Kalgoorlie for preparation and assaying by 50 gram fire assay analytical method. First sample of each sample submission incorporates a barren rock sample as a flush to clean the lab crusher and pulveriser and as a check for contamination. Analytical accuracy and precision are monitored by the analysis of insertion of additional blank material and certified standards. The lab is also required to undertake a minimum of 1 in 20 wet screens on pulverised samples to ensure a minimum 90% passing at -75µm.

RNC has a 100% interest in the producing Beta Hunt gold mine located in Western Australia where a significant high grade gold discovery - "Father's Day Vein" - was recently made. RNC is currently completing a 40,000 metre drill program, the results of which will be incorporated into an updated NI 43-101 compliant Mineral Resource Estimate and mine plan targeted for Q2 2019. Beta Hunt gold resource potential is underpinned by multiple gold shears with gold intersections across a 4km strike length which remain open in multiple directions adjacent to an existing 5km ramp network. RNC also has a 28% interest in a nickel joint venture that owns the Dumont Nickel-Cobalt Project located in the Abitibi region of Quebec which contains the second largest nickel reserve and eighth largest cobalt reserve in the world. RNC owns a 35% interest in Orford Mining Corporation, a mineral explorer focused on highly prospective and underexplored areas of Northern Quebec. RNC has a strong management team and Board with over 100 years of mining experience. RNC's common shares trade on the TSX under the symbol RNX. RNC shares also trade on the OTCQX market under the symbol RNKLF.

This news release contains "forward-looking information" including without limitation statements relating to the liquidity and capital resources of RNC, production guidance and the potential of the Beta Hunt Mine.