Drivers in Alberta saw the steepest annual increase, while Albertans over age 45 have experienced the greatest increase of all age segments over the past year

TORONTO, April 23, 2019 /CNW/ - Today, LowestRates.ca, an online comparison site for personal finance products like insurance, mortgages, loans and credit cards, released its Q1 2019 Auto Insurance Price Index, which uses proprietary data to track the average cost of car insurance in Canada each quarter. The report found rates are up across Ontario, Alberta, and Atlantic Canada in the first quarter of 2019, with drivers in Alberta seeing the steepest increase in the country—11.22% since last year. 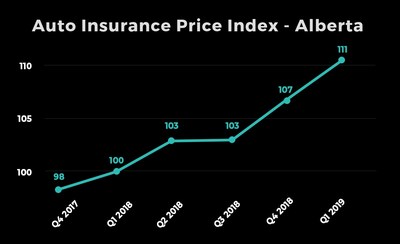 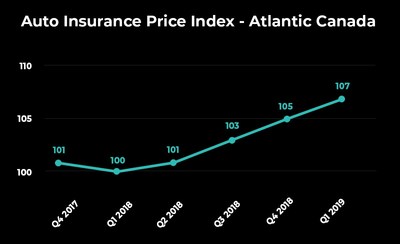 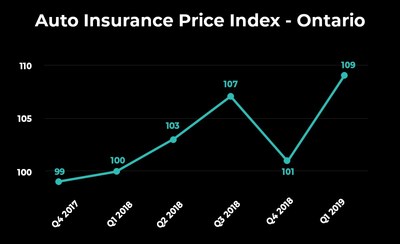 In Atlantic Canada, rates have seen the least severe increase in the past year; up 6.52%, while in Ontario the average cost of auto insurance is up 9.06%.

"Auto insurance rates have been on the rise for more than a year now, and this happens for a number of reasons that are typically outside of the average driver's control—more instances of fraud and a greater number of accidents, for example," said Justin Thouin, Co-Founder and CEO of LowestRates.ca. "While overall rate increases won't affect every driver, if you are affected, this is a great opportunity to shop around for more competitive insurance plans. Most drivers could save quite a bit on their auto insurance if they spent more time comparing rates."

The rise in prices has also been exacerbated by the exit of several insurers from two of the largest markets in Canada — Ontario and Alberta. Esurance and AIG Insurance both announced departures from Canada in the past year. More insurers have recently sounded the alarm on the growing cost of doing business in certain provinces.

"We've heard from our partners in both Alberta and Ontario that caps on pricing in those provinces have led to instances were insurers are paying out more in claims than they were taking in from premiums," said Thouin. "These pricing pressures have resulted in some insurance companies and brokers doing less business in these provinces or exiting altogether, leading to less competition and higher prices."

How does the Auto Insurance Price Index Report work?

The index works by looking at the lowest auto insurance rates available on LowestRates.ca each quarter, getting an average and then comparing it to past quarters. The LowestRates.ca Auto Insurance Price Index tracks the percentage change in the average car insurance quote received by individual drivers insuring only one vehicle in either Ontario, Alberta or Atlantic Canada.

A benchmark quarter, in this case Q1 2018, is used to create a baseline (a reading of 100) for the index. Each point on the index above or below 100 represents a roughly 1% change in prices. For instance, a 104 index reading would mean the price has increased by 4% since Q1 2018.

Each market has seen the following increases on LowestRates.ca's Auto Insurance Price Index:

Read the full report on the LowestRates.ca blog, here.

LowestRates.ca is an online rate comparison site for insurance, mortgages, loans and credit card rates in Canada. The free, independent service connects directly with financial institutions and providers from all over North America to offer Canadians a comprehensive list of rates. LowestRates.ca's mission is to help Canadians become more financially literate, with the goal of saving them $1-billion in interest and fees.