Chalice has ability to continue its aggressive exploration programme with a strong cash balance of ~A$21 million at December 31, 2018. 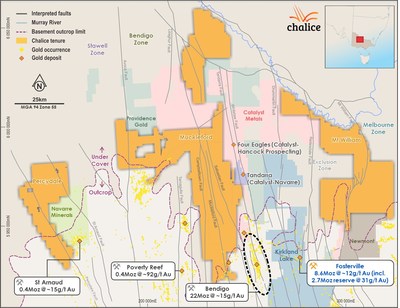 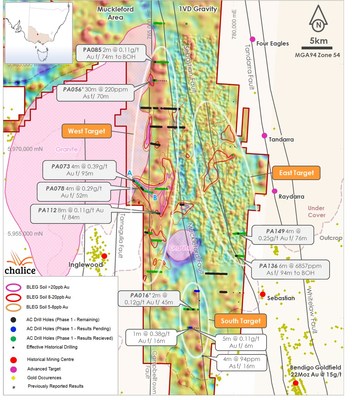 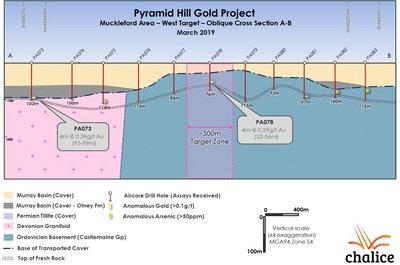 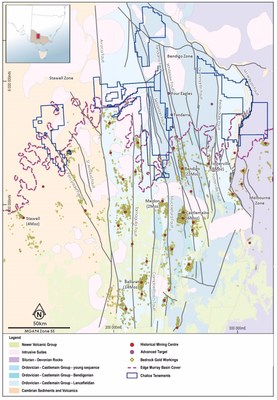 Based on the encouraging new results and the cost-effectiveness of the programme in testing a very large area, the initial 15,000m Phase 1 AC drilling programme at Muckleford has been more than doubled in size to 35,000m. This initial programme will continue until early May 2019.

"Importantly, other recent discoveries undercover in this region, like Four Eagles (Catalyst Metals and Hancock Prospecting) and Tandarra (Catalyst Metals and Navarre Minerals), originated from low level anomalous gold and pathfinder values on initial wide-spaced aircore drilling. This gives us confidence that our systematic approach to exploration at Pyramid Hill is the best way to vector towards areas which could ultimately lead to a world-class high-grade gold discovery."

"In light of the encouraging anomalous intercepts to date, we have more than doubled the size of the initial reconnaissance drilling programme to 35,000m, and will continue drilling through until May."

"Chalice is in a very favourable position, having the financial resources to aggressively explore in this high grade but underexplored gold province, which continues to capture global attention."

The AC drill programme has been designed to provide an effective first-pass test of three high priority, large-scale geochemical, geophysical and structural targets (East, West and South) in areas of reduced cover. Drilling has been successful in intersecting the Castlemaine Group basement, which is the host geological unit for all gold deposits and occurrences in the Bendigo Zone.

Drilling has been undertaken on wide-spaced east-west drill lines with the aim to drill and sample at least 30m of basement below Murray Basin and Permian tillite cover. This type of reconnaissance drilling aims to quickly screen large areas and narrow down to priority targets, based on anomalous gold and pathfinder elements within halos commonly surrounding gold deposits in the region.

Drilling to date has achieved this objective, with only a minor proportion of drill holes having failed to penetrate overburden in isolated areas of deep cover (>150m). Areas of deeper cover are expected to be restricted to the north-eastern part of the Muckleford Area, however, cover thickness has been observed to be highly variable in the drilling to date.

To date, a total of 201 drill holes for 19,500m have been completed and assay results have been received for the first 182 holes totalling 17,430m. Several areas of anomalous gold and pathfinder elements have been identified (Figure 2).

At the East Target, drilling has been undertaken on two 4km-spaced lines to test a structural corridor located along and adjacent to the interpreted position of the Sebastian Fault. The east-dipping Sebastian Fault is an important regional structure associated with gold mineralisation at Sebastian and continues to the south and immediately west of the high-grade >22Moz Bendigo Goldfield.

Drill hole PA136 intersected a zone of strongly elevated arsenic (6m @ 6,857ppm As from 94m) through to the bottom-of-hole. Arsenic is considered one of the better gold pathfinders and therefore these results are considered to be a high priority for additional in-fill and deeper drill testing.

At the West Target, drilling was designed to test a gold + pathfinder soil geochemical trend coincident with a regionally extensive (>30km) gravity anomaly located adjacent to the interpreted position of the Campbelltown Fault and to the immediate east of a Devonian granite.

Drill hole PA073 intersected 4m @ 0.39g/t Au from 95m, associated with coarse quartz gravels at the base of the Murray Basin cover. This hole is located on section with drill hole PA078, which intersected 4m @ 0.29g/t Au from 52m located at a redox front between oxidised and reduced saprolite clays after Castlemaine Group sediments. Additional 1m sub-sampling has been undertaken over this 4m zone to better understand gold distribution within the strongly weathered sediments.

Anomalous gold values have also been returned in drill holes PA085 and PA112. In PA085, gold mineralisation (2m @ 0.11g/t Au from 74m) is located at the bottom-of-hole within fine-grained micaceous sandstone and remains open at depth and along strike.

In PA112, gold mineralisation (8m @ 0.11g/t Au from 84m) is located within oxidised clay directly above reduced saprolitic shale. Given both holes are proximal to the Devonian granite margin to the immediate west, and are >30km apart, this provides an immediate priority area for follow-up drilling.

Based on these encouraging early stage results, as well as previous reported results on the South Target, an additional 15,500m of Phase 1 drilling is planned to better define targets for follow up in-fill drilling.

Muckleford Phase 2 Drilling At the completion of the Phase 1 reconnaissance drill programme, a second phase of AC/RC drilling is planned to in-fill along strike to a drill line spacing of approximately 0.5 – 1.0km where warranted.

It is anticipated that Phase 2 will commence following the completion of Phase 1 in May 2019, where access and permitting constraints allow.

Four targets in areas of thin cover will be tested as part of this initial Phase 1 reconnaissance drill programme:

East Target: A cluster of gold-in-soil geochemical anomalies associated with the interpreted position of the Mt William Fault and associated faults splays along the eastern edge of EL6738.

North Target: A gold-in-soil geochemical trend to the west of a splay fault off the Heathcote Fault.

Percydale Soil SamplingA reconnaissance soil geochemistry survey consisting of approximately 800 samples has commenced within granted EL6805. This tenement lies to the north-west of the historical St Arnaud Goldfield and contains strike extensions of the St Arnaud and Percydale Faults.

Any anomalous results generated from the soil sampling programme will form the basis for a Phase 1 reconnaissance AC drilling programme.

About the Pyramid Hill Gold Project, Victoria, AustraliaThe 100%-owned Pyramid Hill Gold Project was staked in 2017 and now covers an area of ~4,500km2 in the Bendigo region of Victoria. The Project comprises three key districts within the Murray Basin covered North Bendigo and North Stawell Zones: Muckleford, Mt William and Percydale (Figure 1).The central Muckleford Area extends to the north-west of the world-class >22Moz Bendigo Goldfield. The Mt William Area extends to the north-east of one of the world's highest-grade gold mines, the >8Moz Fosterville Gold Mine owned by Kirkland Lake Gold (NYSE /TSX: KL | ASX: KLA). The Percydale Area is located north-west of the historical St Arnaud Goldfield within the Stawell Zone. The 'Gold Undercover1' initiative by the Victorian Government estimated a potential ~32Moz (P50) of undiscovered gold beneath Murray Basin cover in the Bendigo Zone, where Chalice holds ~60% of the total ~7,000km2 prospective area (Figure 5). Chalice is targeting large-scale, high-grade gold deposits, and is currently conducting regional scale greenfield exploration. In Q2 2018 geochemistry and gravity geophysics programmes commenced, outlining multiple large-scale targets in areas of thin to moderate cover. The first phase of reconnaissance aircore drilling commenced in Q4 2018 within the Muckleford Area.

Competent Persons and Qualifying Persons StatementThe information in this announcement that relates to Exploration Results in relation to the Pyramid Hill Gold Project is based on information compiled by Dr. Kevin Frost BSc (Hons), PhD, a Competent Person, who is a Member of the Australian Institute of Geoscientists. Dr. Frost is a full-time employee of the company and has sufficient experience that is relevant to the activity being undertaken to qualify as a Competent Person as defined in the 2012 edition of the Australasian Code for Reporting of Exploration Results, Minerals Resources and Ore Reserves, and is a Qualified Person under National Instrument 43-101 – 'Standards of Disclosure for Mineral Projects'. The Qualified Person has verified the data disclosed in this release, including sampling, analytical and test data underlying the information contained in this release.  Dr. Frost consents to the inclusion in the announcement of the matters based on his information in the form and context in which it appears.