TORONTO, April 9, 2019 /CNW/ - Purepoint Uranium Group Inc. (the "Company" or "Purepoint") (TSX: PTU.V) announced today that it has completed its initial 2019 fieldwork at the Hook Lake JV, a project owned jointly by Cameco Corp. (39.5%), Orano Canada Inc. (39.5%) and Purepoint Uranium Group Inc. (21%).  The project lies on the southwestern edge of Saskatchewan's Athabasca Basin and is adjacent to and on trend with recent high-grade uranium discoveries including Fission Uranium's Triple R deposit and NexGen's Arrow deposit. 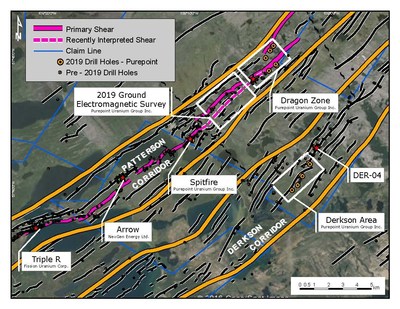 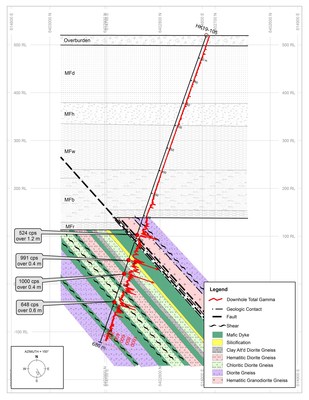 "This winter drill program was crafted with four objectives in mind; to test the Spitfire deposit at depth, confirm the continuation of the Dragon zone to the north, identify geophysical targets between the Spitfire deposit  and the Dragon zone and to initiate first pass drilling along the Derkson corridor" stated Chris Frostad, Purepoint's President & CEO. "As a result of 3D modeling interpretations of the Spitfire deposit, and an initial assessment of drill hole HK19-101 completed early in the program, the joint venture partners have requested a new comprehensive plan to test for deeply rooted mineralized lenses beneath Spitfire similar to the neighbouring Arrow deposit".

"We were also pleased with our work at the Dragon zone this winter, where (pending confirmation from assays) hole HK19-105 appears to have delivered one of the best uranium intercepts north of the Spitfire deposit (see cross section below)" said Scott Frostad, Vice President Exploration. "Unfortunately, warm weather has forced an early demobilization, delaying follow up drilling to the north".

Six drill holes tested two separate EM conductors within the North Dragon area during the 2019 exploration program. The EM conductor tested during the previous drill seasons has been named the "Dragon shear zone" and it is approximately 200 metres wide, is composed of three to four separate graphitic shears dipping southeast and has now been tested over a strike length of 2 kilometres. The second EM conductor has been historically named the "W" conductor and it runs approximately 800 metres west of and parallel to the Dragon shear zone.  Three drill holes continued to test the Dragon shear zone to the northeast (HK19-102, 103 and 106) and 3 drill holes completed initial testing of the "W" conductor (HK19-104, 105 and 107).

Hole HK19-102 was a 300-metre step out northeast along strike of last year's Dragon hole HK18-93 and returned relatively similar results. Both these holes intersected weak radioactivity proximal to the footwall contact of an intensely silicified, clay altered granodiorite gneiss unit near the unconformity.

Drill Hole HK19-103 was a 600-metre step-out along strike NE of HK19-102. Intensely silicified dioritic gneiss was then encountered from the unconformity at 378 metres to 478 metres then a 3-metre wide graphitic structure displaying brittle faulting and illite alteration with local fault gouge intervals and weak radioactivity (230 cps over 4.0 metres from the downhole gamma probe).

Drill hole HK19-106 was collared 80 metres in front of hole HK19-103. A strong overprinting of honey-yellow Illite, typically only seen in the Spitfire deposit, was observed just below 400 metres followed by an interval of weak radioactivity (296 cps over 3.2 metres from the downhole gamma probe).  Stacked graphitic shears, typically found in the Dragon Zone, were encountered between 449 and 490 metres. The three distinct shear zones are hosted in a chloritized mafic rock.

The second "W" conductor hole, HK19-105, was collared 800 metres northeast of HK19-104 and intersected numerous high-strain-zones, a post-Athabasca fault combined with strong hydrothermal alteration and elevated radioactivity (up to 1635 cps from the downhole gamma probe) in both the sandstone and basement rocks. The results of HK19-105 are considered to make the area surrounding HK19-105 highly prospective for both unconformity-type and basement-hosted uranium mineralization.

Hole HK19-107 was collared 300 metres southwest of HK19-105 and intersected multiple radioactive spikes with the greatest radioactivity (732 cps over 0.7 metres from the downhole gamma probe) being returned from a strong shear zone associated with a redox front. Intense silicification (quartz dome) was encountered at the upper contact of the graphitic shears, however, the core lacked illite and intense clay alteration at depth.

Hole HK19-108 was collared 100 metres northeast of the favourable HK19-105 but was lost shortly after the unconformity within strongly clay and hematite altered diorite gneiss at a depth of 438.0 metres.

Discovery International Geophysics of Saskatoon, SK completed 74 kilometres of stepwise moving loop transient EM surveying between the Spitfire and Dragon areas this winter.  An interpretation of the EM results is ongoing and it is anticipated that new drill targets will be provided for the next drill program.

The 2019 Derkson area drilling showed that the strong clay alteration evidenced in historic holes was related to paleoweathering. Once the 2019 drill holes passed through the alteration zone related to paleoweathering, the basement rocks typically showed no further alteration. The electromagnetic conductors outlined by a 2004 ground survey and 2005 VTEM airborne survey were explained by rock units that hosted wide intervals of disseminated graphite and pyrite rather than prospective graphitic structures. The elongate magnetic highs seen within the airborne results were explained as magnetic syenites, an intrusive igneous rock that hosted finely disseminated pyrrhotite. The six Derkson corridor drill holes did not encounter notable alteration or structures within the basement rocks however unconformity-related mineralization, as evidenced with historic hole DER-04 (0.24% U3O8 over 2.5 metres at the unconformity), remains a potential target as does the 2018 gravity low located 1 kilometre west of DER-04.

The Hook Lake JV project is owned jointly by Cameco Corp. (39.5%), Orano Canada Inc. (39.5%) and Purepoint Uranium Group Inc. (21%) as operator and consists of nine claims totaling 28,598 hectares situated in the southwestern Athabasca Basin. The Hook Lake JV is considered one of the highest quality uranium exploration projects in the Athabasca Basin due to its location along the prospective Patterson Lake trend and the relatively shallow depth to the unconformity.

Purepoint Uranium Group Inc. is focused on the precision exploration of its ten projects in the Canadian Athabasca Basin, the world's richest uranium region. Established in the Athabasca Basin well before the initial resurgence in uranium earlier last decade, Purepoint's flagship project is the Hook Lake Project, a joint venture with two of the largest uranium producers in the world, Cameco Corporation and Orano Canada Inc.  The Hook Lake JV is on trend with recent high-grade uranium discoveries including Fission Uranium's Triple R Deposit, NexGen's Arrow Deposit and Purepoint's Spitfire discovery.

THE TSX VENTURE EXCHANGE HAS NOT REVIEWED AND DOES NOT ACCEPT RESPONSIBILITY FOR THE ADEQUACY OR ACCURACY OF THIS RELEASE.