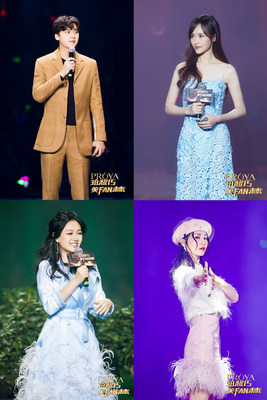 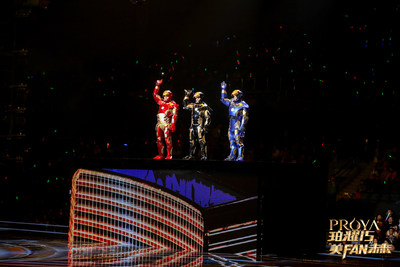 Cosmetica Italia president, Renato Ancorotti and mayor of the French city of Chartres, Didier Garnier, in addition to authoritative leaders from across the global cosmetics industry, sent their best wishes for Proya's 15th anniversary in many languages.

At the celebration, when the fingerprint beams of the three "Iron Men" converged on the big screen, a virtual recreation of Proya Tower at the center of the stage rose slowly, marking the official opening of the building.

Construction of Proya Tower, located at the intersection of Xixi and Gudun Roads, started on September 10, 2015. Designed by US-based architectural firm NBBJ, Proya Tower incorporated building materials originating from environmentally responsible sources, in addition to a powerful, culturally-significant design. With 14 floors above ground and 2 floors below, Proya Tower includes six designated buildings and areas within its perimeter: a building housing a beauty complex, a distinctive cosmetics experience hall, a plastic surgery anti-aging center, an art gallery, an open-air music square and a high-end office building, in addition to the main office building.

The Spring Bud Plan kicks off: the eternal sincerity for love

Since its inception, Proya has been committed to the cause of beauty while making "the spirit of beauty" its social responsibility. Over the years, Proya has been actively participating in public welfare campaigns, including conducting women's public welfare programs in partnership with UN Women, helping to build Hope Primary Schools as part of Project Hope, making donations to earthquake-stricken areas and promoting environmental protection.

Following 15 years of rapid, forward-thinking development and growth, Proya has not only given consumers the opportunity to understand the unlimited potential of the company, but also let them feel pride in Chinese-made cosmetics. Looking ahead, Proya plans to continue its efforts in achieving the globalization of China's cosmetics industry, so that the world can see the power of "Beauty of China"!