Highlights from the 2017 exploration campaign include: 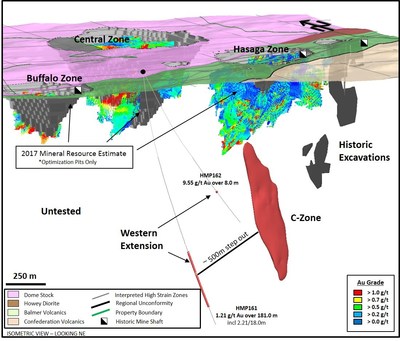 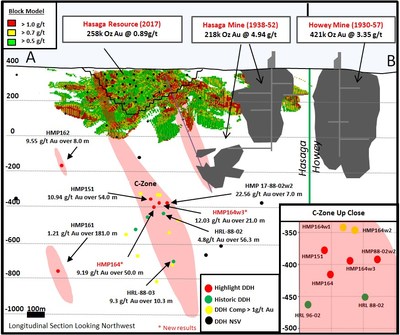 Figure 1 below is a 3D-rendering of the Hasaga Property that profiles the multiple locations of the 2017 mineral resources estimate, the C-Zone delineation target and the new discovery some 500m west of the C-Zone.  A comprehensive table of assay highlights from the 2017 Hasaga Deep drill program is summarized in Table 1.

Abbreviations used in this press release are available by following this link (click here).

Exploration Program OverviewThe Hasaga Property is host to the past-producing Hasaga and Buffalo and Goldshore Mines and is being evaluated for both lower grade, open-pit potential as well as higher grade mineralization that may occur at depth.  Premier considers Hasaga to have similar exploration potential to other historic mining camps in Ontario, where gold resources have been discovered at the site of past-producing mines.

The 2017 exploration program was focused on testing the potential for deeper, higher-grade mineralization in the Hasaga porphyry, which occurs along a two-kilometre corridor between the Hasaga and Buffalo mines and is proximal to a major regional unconformity that separates the Balmer and Confederation-aged rock assemblages. This unconformity is an important component thought critical to the formation of the world class gold deposits in Red Lake currently being mined by Goldcorp Inc.

Host rocks containing the mineralized material include the Dome Stock and Hasaga Porphyry units, both of which are well-known as historic hosts of mineable gold deposits.

The 2017 Hasaga exploration program included drilling 21 holes (including wedged holes) with some 22,000 metres of core drilling at a cost of some C$2.9 million. Premier is actively integrating results of the program and has proposed a 2018 program that continues to explore along the Hasaga Deep Target. An updated mineral resource estimate is anticipated in due course.

Hasaga Deep Target The shallow-focussed exploration programs beginning in 2015, and historic drill holes with positive results (HRL-88-02, HRL-88-03 and HRL96-02) completed by earlier operators, strongly suggested the potential for the discovery of deeper but higher grade gold mineralization.  The area with greatest potential occurs between the Hasaga and Buffalo mines proximal to the Balmer-Confederation unconformity, and is called the Hasaga Deep Target.

Premier based initial targeting on its understanding of the Hasaga mine and the likelihood of continuity further to the west. Premier's first hole of the 2017 campaign returned a high grade intercept in hole HMP151 (see press release dated March 1, 2017; click here) that hosted mineralization characteristic of the C-Zone at the Hasaga Mine.

C-Zone DelineationDelineation drilling conducted to date at the C-Zone target has resulted in a better understanding of the geometries associated with the mineralization. Some of the early conclusions from this program, which may be adjusted based on proposed work in 2018 include:

In Premier's view, the higher-grade mineralization in HMP 162 is consistent with a repetition of a local, steeper NE plunging shoot within the more regional and flatter SW plunging system. For exploration planning purposes, the West Extension may represent a discovery with potential grade and scale similar to the C-Zone.  If this is correct, the overall Hasaga Deep Target represents an opportunity for multiple C-Zone sized discoveries.

Supporting the mineral resource estimate was an initial metallurgical program. Premier reported on a completed metallurgical scoping program on samples from the Hasaga, Central and Buffalo Zones with the intent to characterize the lithological and mineralization domains of the project areas, and to complement the Hasaga mineral resource estimate. Although bottle roll tests utilizing coarser-crush sample composites (¼", ½", ¾" crush sizes) does not support a potential heap leach recovery process, the baseline bottle roll cyanidation study indicated very good recoveries for all grade ranges with metallurgical results of between 94% and 97% when grinding to 80% passing 200 mesh.

Premier will confirm its approved 2018 exploration plan and budget for Hasaga early in the 2018.

Stephen McGibbon, P. Geo., is the Qualified Person for the information contained in this press release and is a Qualified Person within the meaning of National Instrument 43-101.  Assay results are from core samples sent to Activation Labs, an accredited mineral analysis laboratory in Thunder Bay, Ontario, for preparation and analysis utilizing both fire assay and screen metallic methods.

Premier Gold Mines Limited is a gold producer and respected exploration and development company with a high-quality pipeline of precious metal projects in proven, accessible and safe mining jurisdictions in Canada, the United States, and Mexico. Premier's team is focused on creating a low-cost, mid-tier gold producer through its two producing gold mines; and two advanced multi-million ounce development projects where permitting and pre-construction initiatives are in progress.

Premier Gold Mines Limited is one of North America's leading exploration companies with a high-quality pipeline of projects focused in proven, safe and accessible mining jurisdictions in Canada and the United States. The Company's portfolio includes significant assets in...