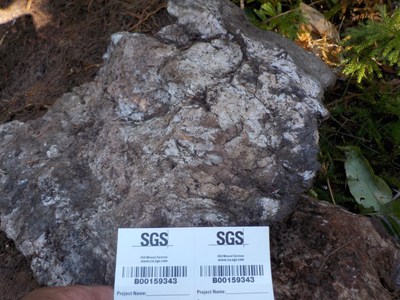 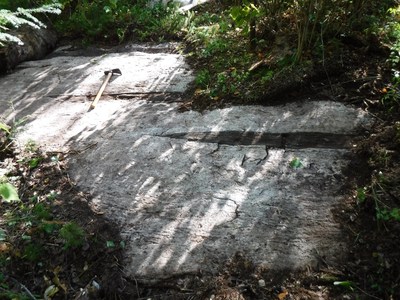 In addition to Lithium mineralization, the petalite dykes in the Jesse's Pegmatite area contain Tantalum (Ta) mineralization. Assay highlights include:

Jesse's Pegmatite area consists of multiple parallel petalite pegmatite dykes with a east-west strike. Based on grab sampling and mapping Power Metals has identified the following clusters of dykes:

This area has significant exploration potential, as the distance between the North and South Dykes is 190 m. Stripping is recommended to identify more dykes in the area and to expand the strike length of each individual dyke.

Dr. Selway, VP of Exploration, stated "We are so excited with the discovery of Jesse's pegmatite at Paterson Lake. I am looking forward to a future drill program which has already been permitted at Paterson Lake on Marko's pegmatite and stripping and drilling on Jesse's Pegmatite. We now have two drill ready properties with huge potential in addition to our flagship Case Lake property."

The dykes all have the same roughly east-west strike as the other pegmatites in the Separation Rapids Greenstone Belt. Jesse's, Rhea's and Cook's pegmatites are along the same contact between mafic metavolcanics and metasediments as other petalite pegmatites historically mapped by Ontario Geological Survey: Draven, Black Bear, Ballpeen, Pegmatites # 5, 6, 7, 8, 9, 10 and 11.

Jessse's pegmatite was first discovered in June 2018 with grab Sample 159021 while mapping between Cook's and Rhea's Pegmatite (press release July 30, 2018) and then Power Metals followed up with a mapping program in early September 2018. The pegmatite was named after Jesse Koroscil, Power Metals senior geologist, who found it. Jesse was also responsible for the discovery of spodumene on East Dyke and Northeast Dyke at Case Lake, east of Cochrane, Ontario (press release Oct. 10, 2017 and Nov. 13, 2017).

About 236 m west of Jesse's North Dykes, along the same metasedimentary ridge, another petalite pegmatite was discovered with 0.94 % Li2O. This West Dyke is a possible extension of the North Dykes. This West Dyke has the same mineralogy as Jesse's pegmatite indicating significant exploration potential to find more petalite dykes along this 236 m long ridge (Figure 2).

Exploration on Marko's Pegmatite highlights over 268 m strike length include:

Power Metals has approved Exploration Permits from Ontario Ministry of Energy, Northern Development and Mines for drilling on both Paterson Lake and Gullwing-Tot Lakes Properties. Both Properties are drill ready.

The grab samples were transported to SGS analytical lab, Lakefield, Ontario by Manitoulin Transport. SGS analytical lab has ISO 17025 certification. Every 20 samples included one external quartz blank and one external lithium standard. The ore grade Li2O% was prepared by sodium peroxide fusion with analysis by ICP-OES with a detection limit of 0.002 % Li2O. A QA/QC review of the standards and blanks for this mapping program indicate that they passed and the assays are accurate and not contaminated.

Julie Selway, Ph.D., P.Geo. supervised the preparation of the scientific and technical disclosure in this news release. Dr. Selway is the VP of Exploration for Power Metals and the Qualified Person ("QP") as defined by National Instrument 43-101. Dr. Selway is supervising the exploration program at Case Lake. Dr. Selway completed a Ph.D. on granitic pegmatites in 1999 and worked for 3 years as a pegmatite geoscientist for the Ontario Geological Survey. Dr. Selway also has twenty-three scientific journal articles on pegmatites. A National Instrument 43-101 report has been prepared on Case Lake Property and filed on July 18, 2017.

Power Metals Corp. is a diversified Canadian mining company with a mandate to explore, develop and acquire high quality mining projects.  We are committed to building an arsenal of projects in both lithium and high-growth specialty metals and minerals. We see an unprecedented opportunity to supply the tremendous growth of the lithium battery and clean-technology industries.  Learn more at www.powermetalscorp.com

ON BEHALF OF THE BOARD,

No securities regulatory authority has either approved or disapproved of the contents of this news release. The securities being offered have not been, and will not be, registered under the United States Securities Act of 1933, as amended (the "U.S. Securities Act"), or any state securities laws, and may not be offered or sold in the United States, or to, or for the account or benefit of, a "U.S. person" (as defined in Regulation S of the U.S. Securities Act) unless pursuant to an exemption therefrom. This press release is for information purposes only and does not constitute an offer to sell or a solicitation of an offer to buy any securities of the Company in any jurisdiction.

This press release contains forward-looking information based on current expectations, including the use of funds raised under the Offering.  These statements should not be read as guarantees of future performance or results. Such statements involve known and unknown risks, uncertainties and other factors that may cause actual results, performance or achievements to be materially different from those implied by such statements. Although such statements are based on management's reasonable assumptions, Power Metals assumes no responsibility to update or revise forward-looking information to reflect new events or circumstances unless required by law.