PayPal is the official payments partner for this competition

TORONTO, May 8, 2019 /CNW/ - PayPal Canada today announced it is the official payments partner for the 2019 season of the Nissan Micra Cup presented by JD Promotion & Competition Inc., in collaboration with Nissan Canada. This will allow motorsport fans to save time and purchase tickets for the two 2019 Nissan Micra Cup races taking place at Canadian Tire Motorsport Park (May and August) online through PayPal. 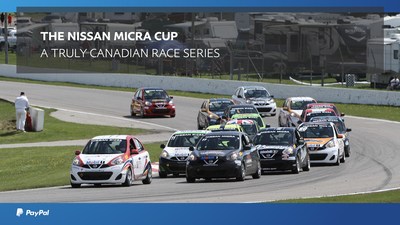 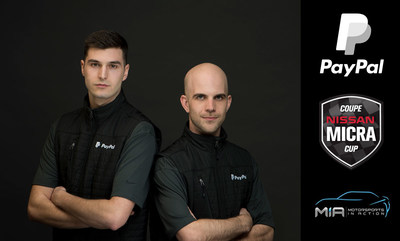 "With Canadians racing to purchase their tickets for this exciting competition, we're thrilled to team up with the Nissan Micra Cup Race Series to offer fans a better ticket buying experience for the 2019 season," said Paul Parisi, president, PayPal Canada. "The automotive industry is an important vertical for PayPal. With the North American automotive e-commerce market expected to reach $16B this year,1 we're proud to support this industry and enable fans to speed through ticket purchases with PayPal."

In further support of this race series, PayPal has also joined hands with Motorsports in Action (MIA) to be the title sponsor of two Nissan Micra Cup cars in this highly competitive series. PayPal Canada-MIA will campaign the #58 car of Taylor Near, 28, and the #97 car of Marco Signoretti, 21. Two promising racers, Near is a Toronto native who has claimed multiple top-five finishes in the Ontario Formula 1200 Championship and claimed the rookie of the year title in his debut year in the Ontario Formula Ford 1600 Championship, and Signoretti is one of Canada's best up-and-coming young drivers, having claimed the Eastern Canadian Karting Championship and representing Canada in the Rotax World Finals in 2016 and 2017.

"In only four years, the Nissan Micra Cup has become a proving ground for talented drivers looking to progress their careers, through our status as the most affordable motorsport series in Canada," shared Jacques Deshaies, Nissan Micra Cup Promoter. "We are delighted to welcome PayPal into our network, helping to make our sport as accessible for fans as it has historically been for drivers."

The Nissan Micra Cup is the most affordable motorsport series in Canada. Unlike most motorsport events, each Nissan Micra race car has the exact same specifications, resulting in a competition that truly reveals the most skilled drivers. The Nissan Micra Cup exclusively features the stock Micra 1.6 S manual transmission model with minor modifications to render it race-ready. From May to September, across six races in Ontario and Quebec, over 25 Nissan Micras tackle Canada's most established and challenging racetracks, offering fans an adrenaline-packed show at every turn.

PayPal has also partnered with Canadian Tire Motorsport Park (CTMP), one of the foremost racing and automotive performance facilities in Canada.  Opened in 1961, the iconic CTMP track is the home to a full calendar of world-class events and attracts more than 530,000 visitors annually. Starting today, race fans will be able to save time and purchase tickets with PayPal for all of CTMP's major 2019 events including the two Nissan Micra Cup events online at www.CanadianTireMotorsportPark.com.

Fans can pay with PayPal to save 25 per cent off a Weekend Super Ticket or a Sunday Ticket for the upcoming May 17-19 Victoria Day SpeedFest Weekend at Canadian Tire Motorsport Park. Tickets can be purchased here using code PayPal25.

About PayPalFueled by a fundamental belief that having access to financial services creates opportunity, PayPal Holdings, Inc. (NASDAQ: PYPL) is committed to democratizing financial services and empowering people and businesses to join and thrive in the global economy. Our open digital payments platform gives PayPal's 277 million active account holders the confidence to connect and transact in new and powerful ways, whether they are online, on a mobile device, in an app, or in person. Through a combination of technological innovation and strategic partnerships, PayPal creates better ways to manage and move money, and offers choice and flexibility when sending payments, paying or getting paid. Available in more than 200 markets around the world, the PayPal platform, including Braintree, Venmo, Xoom and iZettle, enables consumers and merchants to receive money in more than 100 currencies, withdraw funds in 56 currencies and hold balances in their PayPal accounts in 25 currencies. For more information on PayPal, visit www.paypal.ca.

About the Nissan Micra CupSanctioned by Auto Sport Québec (ASQ) and presented by JD Promotion & Compétition with the support of Nissan Canada, the Nissan Micra Cup exclusively features the stock Micra 1.6 S M/T model with minor modifications, including racing suspension. The Nissan Micra Cup is for people who are passionate about motorsports, want to experience all the fun and thrills of racing, but without spending staggering amounts of money.

About Motorsports in Action (MIA)Since 2002, Motorsports in Action has been building race cars for various local and international series, acquiring a wealth of knowledge and resources along the way. Their race shop is well known for high-end mechanics, exotic automotive maintenance, complete race car building and design, prestige paint, and meticulous detailing.

About Canadian Tire Motorsport ParkSince 1961, Canadian Tire Motorsport Park has been the leading racing and automotive performance facility in Canada, hosting series' ranging from international sports cars to NASCAR on the renowned 3.957-kilometre Grand Prix track. The state-of-the-art facility provides an engaging space suitable for any event; whether you're here for the on-track racing action or a personal celebration, CTMP offers the flexibility and capacity to accommodate any event.