Highlights of the Bellary Dome Project: 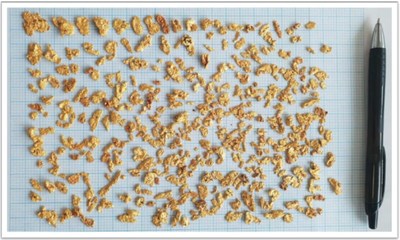 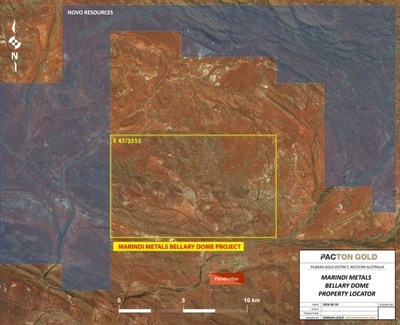 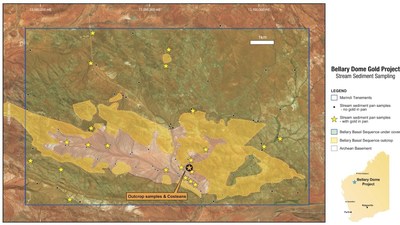 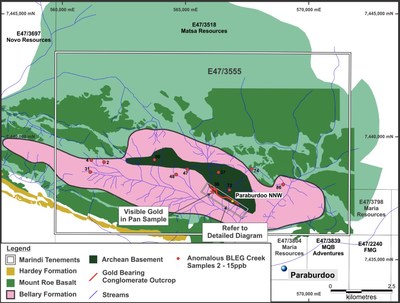 "The acquisition of Bellary Dome provides access to a significant strike length of highly prospective Hardy Formation and Mount Roe Basalts, where multiple flattened nuggets have been recovered proximal to the Bellary Formation conglomerate," commented Alec Pismiris, Interim President and CEO of Pacton Gold. "The property is surrounded by Novo Resources and with over six ounces of gold nuggets recovered from one alluvial trap site, that were pitted, flattened, and in the elongated "watermelon seed" shape, provides additional key priority exploration targets for Pacton."

"Marindi's initial work at Bellary Dome has only just begun to highlight the potential for this to be just one part of a much larger regional gold play across the Pilbara region of Western Australia. Conglomerate-gold-focused Pacton Gold has purposefully acquired an extensive land-holding of high-value projects across the region and the Bellary Dome project would be a natural fit to that portfolio. Marindi is pleased to have the opportunity to be invested in such a dynamic and focused conglomerate gold explorer, best placed in taking the Bellary Dome conglomerate gold project forward," stated Simon Lawson, Managing Director of Marindi.

The prospectivity of the tenement is further highlighted by the presence of numerous alluvial gold workings, prospecting pits with gold values ranging from anomalous to 38.2g/t Au, and recent modern gold prospecting activity. The selected samples are not necessarily representative of mineralization at Bellary Dome and there are no assurances the Company will receive similar results.

The Bellary Dome occurs on the southern edge of the Hamersley Basin where formations of the Lower Fortescue Group occur. Tenements neighbouring ELA 47/3555 are held by companies also conducting exploration for gold-in-conglomerate, including Novo Resources, Southern Hemisphere Resources and Hardey, whereas the majority of tenements in the Southern Pilbara remain in the hands of predominantly iron ore focused companies. ELA 47/3555 also hosts 10 km of Hardey Sandstone which sits conformably above the Mt Roe Basalt on the southern side of the ELA. This will also be assessed given the Beatons Creek conglomerate, which is associated with gold production at Nullagine in the East Pilbara, is also a member of the Hardey Sandstone.

For location map of the Property, please see:  http://www.pactongold.com/Pacton-Location-Map.jpg.

Sprott Capital Partners will receive a fee for acting as advisory with respect to the transaction in the amount of 750,000 common shares of the Company.

This transaction is subject to the acceptance of the TSX Venture Exchange.

The technical content of this news release has been reviewed and approved by Peter Caldbick, P.Geo., a director of the Company and a Qualified Person pursuant to National Instrument 43-101. The qualified person has not visited the Bellary Dome site and therefore has not verified the data disclosed, including sampling, analytical, and test data underlying the information or opinions contained in the written disclosure.

On Behalf of the Board of Pacton Gold Inc.