"The results we're releasing today both for the fourth quarter and for the fiscal year reflect the actions we've taken over the past two years to improve our profitability. We're encouraged by this third straight quarter with a positive bottom line, driven by improved operating margins and meeting all our objectives for the year," said President and Chief Executive Officer Marc Barbeau.

Ovivo's revenues for the fourth quarter of fiscal 2016 were up over 14% from the same period of fiscal 2015 (6% organic change at constant exchange rates (1)). This revenue growth was observed in new equipment sales in the Energy market in Europe resulting from major orders received late last year. Upgrading, Parts and Services sales remained stable compared with the same quarter of the previous fiscal year (negative organic growth of 8%). They accounted for nearly 25% of Ovivo's total revenues for the fourth quarter of fiscal 2016.

The Corporation generated revenues and adjusted EBITDA(1) for the year ended March 31, 2016 of $330.0 million and $17.1 million, respectively. The $5.0 million increase in adjusted EBITDA(1) resulted in part from improved operating performance across all our segments and savings from restructuring carried out in fiscal 2015 in the Energy segment in Europe and North America and at the head office.

The backlog of $262.0 million as at March 31, 2016 was down $20.9 million from December 31, 2015 mainly as a result of the Canadian dollar's strengthening against the Corporation's main currencies for an unfavourable effect of $16.4 million. At constant exchange rates, this decline in backlog was driven primarily by the Energy market in Europe and North America due to progress on projects underway in the fourth quarter and the challenging economic conditions that prevail in this segment. This was partially offset by growth in the Electronics backlog following new contract wins in Asia and North America announced in February and May 2016. The Municipal North America market maintained a high level of order taking, keeping its backlog at a level comparable with December 31, 2015, at constant exchange rates.

The increase in backlog from $254.8 million as at March 31, 2015 originated from the Upgrading, Parts and Services market, whose backlog was up 10% from March 31, 2015, as well as major contract wins in the Electronics market in the second half of fiscal 2016.

For more than a year, we have been a simplified business exclusively dedicated to water treatment with our efforts now focused on growing and optimizing corporate profitability.

All the objectives we set for fiscal 2016 have been met, namely:

(i) Growth in our Electronics backlog, while maintaining the level of our Energy backlog;(ii) Continuous improvement in operating margin;(iii) Completion of non-core business disposals;(iv) Continued revenue growth in the Upgrading, Parts and Services market;(v) Net debt of nearly nil as at March 31, 2016; and(vi) Initiatives and sustained investment in innovation.

For each of our segments, the potential and outlook are summarized as follows:

The Municipal North America market continues to be characterized by growing infrastructure replacement and modernization needs, the challenges faced in water-stressed regions and increasingly stringent legislation governing wastewater disposal. These are favourable items in supporting a satisfactory level of tendering and order taking for most of our products.

In the Electronics segment, our water treatment expertise is recognized worldwide in the semiconductor fabrication process which requires large volumes of ultra-pure water. To meet stringent industry requirements, we offer a range of state-of-the-art technology solutions. Ovivo is part of a select group of companies that are collaborating to develop the next generation of silicon wafers: the F450C. With our noted expertise and global platform, we are favourably positioned to capitalize on the growth potential of this market for both new projects and Upgrading, Parts and Services. Although the backlog for major projects varies according to market needs, large contract wins over the past two quarters and our service centre platform are supporting satisfactory business volumes.

Our international platform is an undeniable asset for the Energy segment, as we can partner with clients anywhere in the world, regardless of where their projects are based. Our backlog level held steady during the current year. However, given current conditions in the oil and gas market, overall economic activity in the Energy market has been adversely impacted, resulting in a certain slowdown in the number of requests for proposals and new orders taken.

At the same time, the Upgrading, Parts and Services market, a key growth driver for the Corporation, continues to perform well by leveraging our products' Total Life Cycle approach and Ovivo brand recognition. Efforts are made in the Middle East and Southeast Asia to better capitalize on opportunities arising from our sizable pool of equipment in operation in those regions. Revenues for twelve-month periods have been growing steadily since the implementation of our business strategy.

Based on our current outlook and backlog, assuming exchange rates remain stable at current levels, revenues from continuing operations should range from $325 million to $350 million for the fiscal year ending March 31, 2017.

In addition, due to our backlog level and cash on hand, we are favourably positioned to pursue our growth projects over the coming quarters.

We have set the following objectives for fiscal 2017:

This press release discusses the highlights for the fourth quarter and year ended March 31, 2016. For a detailed analysis, see the management's discussion and analysis and audited consolidated financial statements, filed today on the websites of SEDAR (www.sedar.com) and the Corporation (www.ovivowater.com). Note that non-IFRS financial measures were used to analyze performance, as management considers that they provide useful information for investors seeking to assess the Corporation's performance and financial position.

Ovivo is a global provider of equipment, technology and systems producing among the purest water and treating some of the most challenging wastewater in the industry. Ovivo is a powerful global brand with renowned trademarks, possessing more than 150 years of expertise and references in water treatment, supported by its proprietary products, advanced technologies and extensive system integration knowhow. Ovivo delivers conventional or highly technological water treatment solutions for the industrial and municipal markets, and leverages its large installed base of equipment around the world to offer parts and services to its customers. Ovivo is dedicated to innovation in an industry that is in constant evolution and offers water treatment solutions that are cost-effective, energy‑efficient and environmentally sustainable.

Ovivo operates an integrated global platform in over 15 countries, with 800 employees that are worldwide experts in water treatment. Ovivo is a public company whose shares trade on the Toronto Stock Exchange under the ticker symbols OVI.A and OVI.B. For further information, visit our website at www.ovivowater.com/en/.

Information about the risk factors to which Ovivo Inc. is exposed is provided under Section 12, "Risks and uncertainties," of management's discussion and analysis for the fiscal year ended March 31, 2016 available on SEDAR (www.sedar.com) and the Corporation's website (www.ovivowater.com). 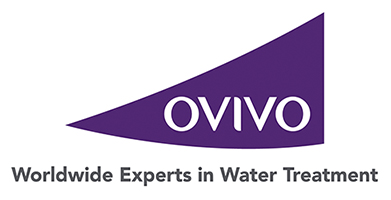 About Ovivo Inc. Ovivo is a global provider of equipment, technology and systems producing among the purest water and treating some of the most challenging wastewater in the industry. Ovivo is a powerful global brand with renowned trademarks, possessing more than 150 years...