TORONTO, Sept. 12, 2018 /CNW/ - Orford Mining Corporation ("Orford") (TSXV: ORM) is pleased to announce the completion of the 2018 summer prospecting, mapping and drilling program on its Qiqavik property in Northern Quebec. The 2018 program included 8 drill holes totaling 1,211m (figure 1). The highlight of the 2018 program is the drilling discovery of a thick sequence of quartz-carbonate veining associated with sulphidic metasediments in the Interlake area intersected in three drill holes (QK-18-002, -007 and -008). Assay results from drilling are pending. This work also identified several new surface gold showings (Figure 2). 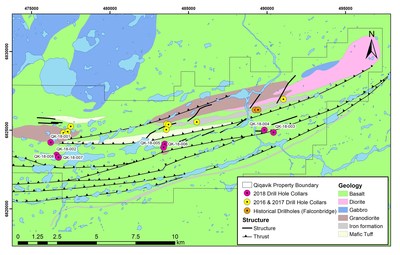 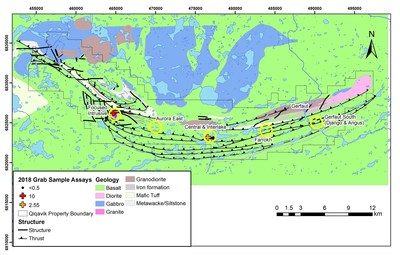 David Christie, President and CEO of Orford, commented, "I continue to be very encouraged by the discovery of multiple new visible gold occurrences at surface on the Qiqavik property. The new discoveries are in addition to the eight separate high-grade gold discoveries previously made at Qiqavik in 2016 and 2017. I look forward to receiving the pending assay results from the drilling and sampling work conducted during the 2018 summer program. I am particularly intrigued by the geology intersected in the "Interlake" area drilling. It is clear to me that the Qiqavik property requires continued exploration of the 40 km long gold belt located in a previously unexplored region of Canada."

Work completed by Orford prior to 2018 on the Qiqavik property has resulted in the discovery of multiple high-grade gold showings across the 40km strike length of the Qiqavik trend. Exploration efforts during the summer of 2018 were focused on discovering structural and chemical traps within the Qiqavik gold system. The summer 2018 work was targeted by the results of the 2017 exploration program, including the regional till sampling, and the structural interpretation of the property-wide spring 2018 detailed airborne magnetic survey.

The 2018 drilling program focused on the Central, Interlake and Gerfaut areas of the Qiqavik Property (Figure 2) and consisted of 1,211 metres in 8 holes. Drilling at the newly discovered Interlake Zone in the Central portion of the property resulted in the intersection of an extensively quart-carbonate veined sulphidic-graphitic metasedimentary horizon associated with a regional shear zone with alteration and mineralization zones of up to 30 metres thick1.  Drill holes QK-18-002, -007 and -008 intersected this target. Assays for drilling are pending and expected to be received by early October.

The summer exploration program at Qiqavik also included 541 surface samples of both bedrock and boulders, 1,034 till samples, geological mapping, prospecting and ground VLF geophysics. The program was successful in identifying two new gold showings, grading 10 gpt and 2 gpt in surface grab sampling (figure 2)2. Only 6% of grab sample assays have been received to date.

About Qiqavik The Qiqavik Property covers the 40-km long Qiqavik Break, part of the Cape Smith Belt event which is of Paleoproterozoic age (1.8-1.9 billion years). This geologic era is marked by its significant metal endowment as illustrated by the important gold districts that occur worldwide related to geological events of Paleoproterozoic age.  These include the Flin Flon-Snow Lake Belt, the Ashanti Gold Fields of West Africa, the Tapajos-Parima Belt of Brazil, and the Tanami Region in Australia3.  The Cape Smith Belt is also home to Glencore's world class Raglan Mine.

Early-stage exploration work completed to date on the Qiqavik Property shows that high-grade gold and copper occurrences are associated with secondary splay structures located along the district-scale Qiqavik Break Shear Zone which extends the full 40 km length of the Qiqavik Property. Geological data indicate that gold mineralization at Qiqavik is structurally controlled and associated with porphyry intrusions in places.

Qualified PersonThe disclosure of scientific and technical information contained in this news release has been approved by Alger St-Jean, Vice President, Exploration of Orford, a Qualified Person under NI 43-101.

The information regarding work disclosed herein in respect of the Qiqavik Property is in part based on the independent report of Clement Dombrowski, P.Geo of IOS Services Geoscientifiques Inc. titled "NI 43-101 Technical Report on Qiqavik Project, Northern Quebec, Canada" effective September 14, 2017, and on Orford Mining's press releases of October 26th, 2017 and November 15th, 2017 available on Orford Mining's website and on SEDAR.

Issuance of Shares to Carolina Gold Resources Inc. Orford also announces that, pursuant to a memorandum of agreement dated March, 2017 entered into with Carolina Gold Resources Inc. (CGR), as amended, Orford has issued 108,000 shares to CGR at $0.50 per share (valued at the per share price of the Orford shares on the October 2017 closing of Orford's "Qualifying Transaction" on the TSX Venture Exchange) in settlement of Orford's obligation to issue $54,000 worth of its shares.

About Orford Mining CorporationOrford Mining is a mineral explorer focused on highly prospective and underexplored areas of Northern Quebec and the Carolina Gold Belt in United States. Orford's principal assets are the Qiqavik and West Raglan projects comprising of a land package totaling over 70,000 hectares in the Cape Smith Belt of Northern Quebec and properties in the U.S. Carolina Gold Belt. The Qiqavik Project hosts several new high-grade gold discoveries along a mineralized trend in excess of 40 km. Orford's common shares trade on the TSX Venture Exchange under the symbol ORM.

This news release contains "forward-looking information" including without limitation statements relating to the liquidity and capital resources of Orford and potential of one or more of the Qiqavik, West Raglan, Jones-Keystone Loflin and Landrum-Faulkner exploration properties.

Forward-looking statements involve known and unknown risks, uncertainties and other factors which may cause the actual results, performance or achievements of Orford to be materially different from any future results, performance or achievements expressed or implied by the forward-looking statements. Factors that could affect the outcome include, among others: future prices and the supply of metals; the results of drilling; inability to raise the money necessary to incur the expenditures required to retain and advance the properties; environmental liabilities (known and unknown); general business, economic, competitive, political and social uncertainties; accidents, labour disputes and other risks of the mining industry; political instability, terrorism, insurrection or war; or delays in obtaining governmental approvals, failure to obtain regulatory or shareholder approvals. For a more detailed discussion of such risks and other factors that could cause actual results to differ materially from those expressed or implied by such forward-looking statements, refer to Orford's filings with Canadian securities regulators available on SEDAR at www.sedar.com.

The TSXV has neither approved nor disapproved the contents of this news release.