TORONTO, April 3, 2018 /CNW/ - Orefinders Resources Inc. ("Orefinders" or the "Company") (TSX.V: ORX) is pleased to announce that it has entered into a definitive agreement to acquire a 100% interest the McGarry Mine and Barber-Larder Properties (collectively "McGarry") from Kerr Mines Inc. ("Kerr"), formerly known as Armistice Resources Ltd. 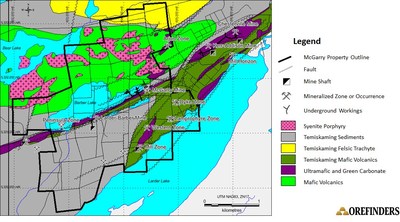 "We are very pleased to announce this acquisition and see this transaction as excellent value for our shareholders. We were able to negotiate favourable terms with Kerr as they believe in Orefinders' vision and strategy to acquire established resources within the Abitibi while focussing on shareholder value with minimal dilution. McGarry's combination of its existing resources, its proximity to major mines (the Kerr-Addison Mine) and orebodies, its mine infrastructure, ease of access and its significant exploration upside opportunity make this a highly accretive transaction for shareholders. McGarry fits right in line with our Mirado Mine and Knight projects, all of which are in the Abitibi, have known resources, former production, significant resource expansion potential and access to infrastructure.  We like to take advantage of work that's been done in the past, then apply our geologic understanding and approach designed to ultimately define larger and new orebodies. This model has proven quite effective with Cote Lake, Canadian Malartic, Detour and Sigma-Lamaque, which were all former producers in great jurisdictions that had new life breathed into them by a reinvigorated geological process and investment. Orefinders now owns three such assets, all within a tight radius of each other," said Stephen Stewart, Orefinders CEO.

The McGarry property is in Virginiatown, Ontario within the Abitibi Greenstone Belt and spans 2.4km on one of the world's most prolific gold structures, the Cadillac Larder-Lake Break.  The property encompasses 681 hectares and is comprised of 46 Patented Mining Claims and 5 Mining Licenses.

On site infrastructure includes a head frame, shaft compartments, hoist, offices, and fully functional core shack all refurbished over the last ten years.  McGarry is easily accessible with the Trans-Canada Highway running directly through the property.

The above exploration results and grades include 35% dilution and are reported from Kerr Mines news release April 22, 2013 which is available on Sedar.com.

The McGarry Property was the subject of a PEA study in 2011 that outlined a historical mineral resource of 447,000 tonnes grading 7.89 gpt gold for a total of 112,000 gold ounces in the Indicated Category and an additional 157,000 tonnes grading 5.83 gpt gold for a total of 29,000 ounces in the Inferred Category (Table 1 below).  This estimate was based on a 3.43 gpt Au lower cut-off with assay grades limited to 51.4 gpt gold.  A specific gravity of 2.79 grams per cubic metres was used along with a minimum horizontal mining width of 1.5 metres.  The report is available at www.sedar.ca under Kerr Mines Inc. and its amended version was published on 30 September 2011.

Refer below for the caution on historical mineral resources and mineral reserves.

The McGarry Property also hosts the Barber-Larder open pit which produced 70,000 tonnes of materials, of which approximately 51,000 tonnes were processed at the Kerr Mill which returned a total of 6,700 ounces of gold for an average reconciled grade of 4.1 gpt gold (see MNDM AFRI file 32D04SE0006).  This area of the property and its historical production are distinct from, although abutting, the production and resources on the McGarry shaft zone.

The McGarry Property is host to numerous gold mineralized zones and many have only been drilled to relatively shallow depth.  The following is a short summary of potential targets on the Property that merit follow-up (see Figure 2 for locations).

Development work by the previous owners has prepared the 325N Zone for production.  This zone is of particular interest because of its high grades as described above.

Exploration on the McGarry Deposit was quite extensive in and near the existing mining infrastructure but generally outside the area of the shaft between the 1,250 and 2,250 ft levels exploration has been a lot less intensive.  Considering the abundant underground infrastructure, the targets that can be pursued can be quite small.  In particular, between the shaft and the eastern limit of the Property, there is ample room for discovery and the proximity of the historic Kerr-Addison mine opens up the possibility of deep extensions of that deposit on the west side of the Armistice Fault as suggested by north side down movement along the Larder Lake Break (see MNDM OFR5831).

The Barber-Larder deposit was mined as a small open-pit by Golden Shield Resources between November 1987 and July 1988.  Production bottomed out at approximately 46 metres.  However, the deposit continues below at similar grades (see MNDM, AFRI 32D04SE0006).  Moreover, beyond the top 120 metres vertical the deposit has not been much explored and there are indications of significant gold mineralization down to at least 600 metres vertical where a hole intersected a narrow 30 cm core length interval at 11.7 gpt gold.

Approximately 25 metres east of the open pit a hole intersected a 7.9 metre interval grading 7.5 gpt gold and although there is only 330 metres between the eastern end of the old workings in the Barber-Larder mine (120 metres) and the western end of the 2,250 foot level in the McGarry Mine the vertical distance is over 550 metres.  Within this envelope there is ample room for exploration.

The Peninsula Zone is located immediately west of the Barber-Larder Mine along the same package of deformed and altered rocks.  A hole drilled near the peninsular island returned 3.4 gpt gold over a core interval of 6.1 metres at a vertical depth of 85 metres (see MNDM AFRI 32D04SE0006).

The Mill and Western Zones are located in a northeast striking ultramafic unit that has been completely altered to carbonate.  The Mill Zone is located at the southern end of the 750m long ultramafic unit and is cut off by an east-northeast trending fault.  Drilling on this zone intersected up to 36.7 gpt gold over 2.1 metres.

The Western Zone is located near the northeastern end of the same altered ultramafic unit.  The zone was trenched over 75 metres in length and indicated the presence of a small mineralized shoot approximately 15 metres long and 1.7 metres wide and assaying an average of 3.9 gpt gold (see MNDM AFRI 32D04SE0402).

The Dyke Zone is located in the southeastern corner of the McGarry Property and is hosted by an altered diorite or gabbro.  The NE trending dike is fractured in places and contains quartz and calcite stringers with pyrite.  The zone extends for over 300 metres and was sampled over about 100 m giving an average of 7.25 gpt gold over about 1.0 metres in width (see MNDM AFRI 32D04SE0402).

The Lamprophyre Zone is located on the southeastern corner of the Property and is hosted by mafic volcanics of the Temiskaming Assemblage. The mineralized zone consists of a NE trending shear at the contact of a lamprophyre dike.  Values up to 3.9 gpt gold are reported over 0.9 metres (MNDM, ARV050).

The Arjon Shear Zone is located in the northeast corner of the McGarry Property and extends to the northeast onto the adjacent Kerr Property.  There are a few drill holes marked on a 1941 map (MNDM ARV50, MDC03) and mapping indicates the presence sheared ultramafics rocks transformed to green carbonate.  The map also shows some NE trending quartz veins several tens of metres long but no assays.  None of these drill holes were compiled by later explorers and are of uncertain origin.  The Arjon Shear is oriented NE and cuts the Blake River mafic volcanics, some altered Ultramafic Units, and the syenite porphyry.  Only low grade gold values (up to 2.8 gpt Au) were found on the occurrence as there was generally no interest in the past for bulk-minable targets little work was done after the 1930's.  On the adjacent Kerr property there is a description of a "Northern" crosscut that was driven on the 2,500 foot level across the Temiskaming sediments into some mafic volcanics which are presumably the Blake River Assemblage.  This reference describes a 400 foot (122 metres) section of drifting in altered and sheared volcanics that assayed a minimum of 200 ppb over the whole interval with some higher grade sections within.

This target needs to be followed-up for its potential for intrusion-hosted bulk-minable gold mineralization.

The definitive agreement's effective date is March 29, 2018, and Orefinders, at its option, has an additional sixty days to complete its due diligence and to obtain all necessary approvals. In consideration for the McGarry Property, as described above, Orefinders would issue 8 million of its common shares ("Shares") to Kerr. The Shares are subject to a lock up agreement with Kerr and are scheduled to be free trading over a two-year period.  Additionally, should Kerr opt to sell any of the Shares as they become free trading, Orefinders has the first right of refusal to reacquire these shares at fair market value. Closing of the acquisition remains subject final approval of the TSX Venture Exchange, as well as certain other conditions as are customary in transactions of this nature.

QP StatementThe technical information contained in this news release has been reviewed and approved by Charles Beaudry, P.Geo, Director and Vice President Exploration for Orefinders, who is a Qualified Person as defined in "National Instrument 43-101, Standards of Disclosure for Mineral Projects."

Neither TSX Venture Exchange nor its Regulation Services Provider (as that term is defined in the policies of the TSX Venture Exchange) accepts responsibility for the adequacy or accuracy of this release. Certain information in this press release may contain forward-looking statements. This information is based on current expectations that are subject to significant risks and uncertainties that are difficult to predict. Actual results might differ materially from results suggested in any forward-looking statements. Orefinders' assumes no obligation to update the forward-looking statements, or to update the reasons why actual results could differ from those reflected in the forward looking-statements unless and until required by securities laws applicable to Orefinders. Additional information identifying risks and uncertainties is contained in filings by Orefinders with Canadian securities regulators, which filings are available under Orefinders' profile at www.sedar.com.