VANCOUVER, Nov. 9, 2017 /CNW/ - Credit Suisse Asset Management and its Canadian partner today announced the opening of The Exchange office tower in Vancouver's Financial District. The Exchange is a CAD 240 million investment and the first major project in North America that a real estate fund of Credit Suisse Asset Management built from the ground up. 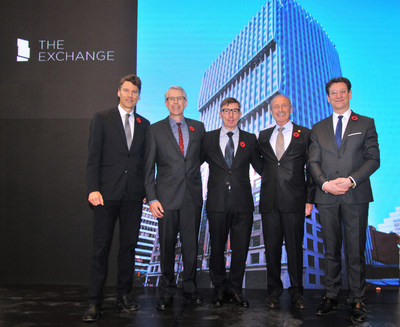 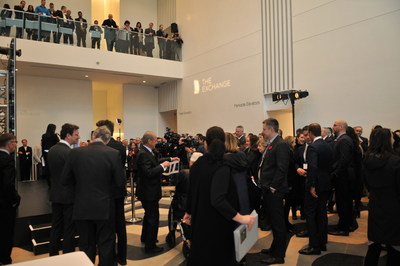 "A few years ago, we expressed our confidence in Vancouver's economy and its future," said Christoph Schumacher, Head of Global Real Estate at Credit Suisse Asset Management. "While we would typically invest in a fully-developed leased property, we were confident that we could manage this development from start to finish, which speaks to our confidence in Vancouver and its future. Made possible by international partnerships, today, we are proud to deliver an office tower that defines the next generation."

"Vancouver's economy is booming and it's an honour to have a global powerhouse like Credit Suisse choose our city for its first North American project and be a part of our growth," said Mayor Gregor Robertson. "Office space is at a premium in downtown Vancouver and The Exchange offers critical new job space while delivering a world-class sustainable building that preserves the heritage of the Old Stock Exchange."

The Exchange's Vancouver investor said the project speaks to the global impact of Vancouver's sustainability initiatives, as well as Credit Suisse Asset Management's standard of excellence.

"When we approached Credit Suisse about building an office tower in Vancouver, critical to their decision was that the project achieve the highest environmental standards and architectural excellence," said Franz Gehriger, CEO of SwissReal Investments.

"The new tower arose entirely from the context of the Old Stock Exchange building, which we preserved as the cornerstone of the new structure," said Harry Gugger, known for his work on Beijing's Bird's Nest Stadium and London's Tate Modern Gallery. "The Exchange is a distinctive, iconic pillar of Vancouver's historic financial district. Viewed from the street, the elegant pinstripes of its façade mullions create a unique identity for the tower at the heart of Vancouver's downtown."

With Vancouver's office market currently ranking the second tightest in North America, The Exchange is already almost two-thirds leased. Its anchor tenant, National Bank, is the second oldest and sixth largest bank in Canada. It is globally ranked as one of the Top 20 most sustainable financial institutions. National Bank will occupy 45,000 square feet of The Exchange.

Executive Hotels will operate a luxury boutique hotel in the heritage portion of the building, while a Vancouver accounting firm, Smythe LLP, and a fintech company, HyperWallet Systems, will occupy a total of 50,500 square feet. Swiss chocolatier Lindt has a retail store on the ground level, and Sovereign General Insurance recently signed a lease.

Credit Suisse AGCredit Suisse AG is one of the world's leading financial services providers and is part of the Credit Suisse group of companies (referred to here as 'Credit Suisse'). Credit Suisse is headquartered in Zurich and operates in over 50 countries worldwide. The group employs approximately 46,720 people. The registered shares (CSGN) of Credit Suisse's parent company, Credit Suisse Group AG, are listed in Switzerland and, in the form of American Depositary Shares (CS), in New York. Further information about Credit Suisse can be found at www.credit-suisse.com.