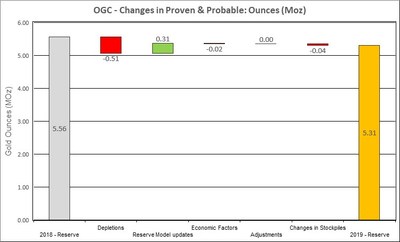 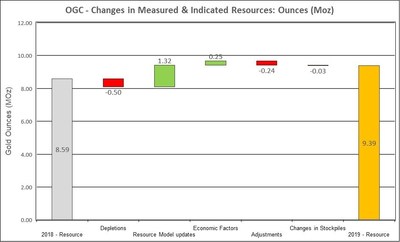 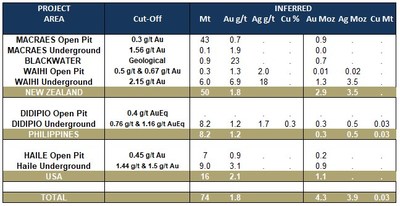 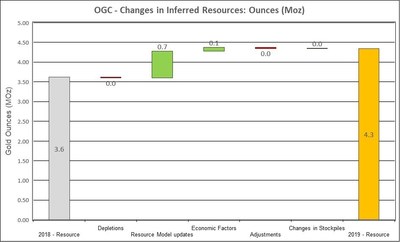 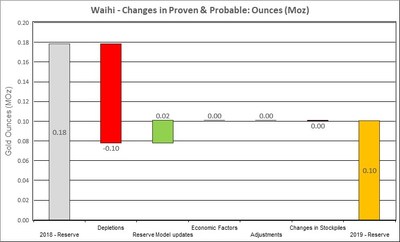 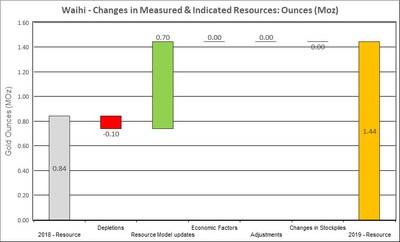 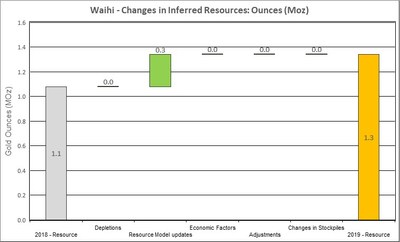 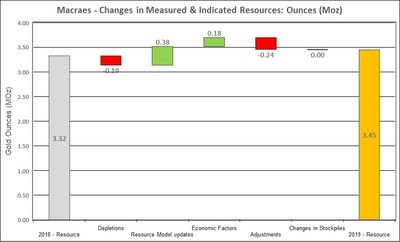 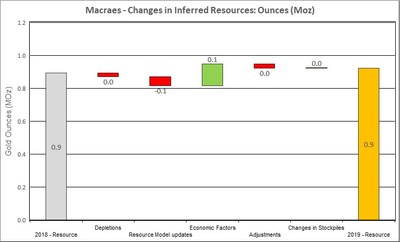 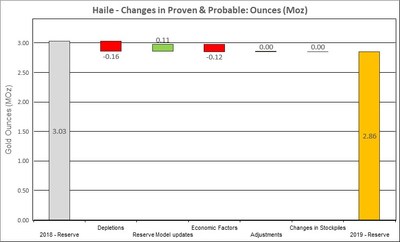 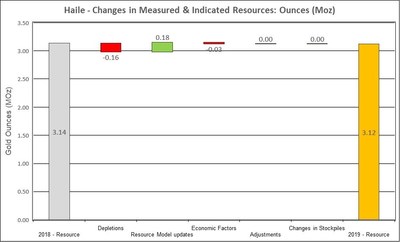 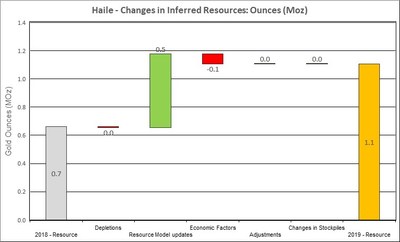 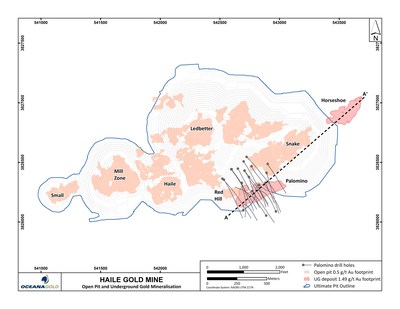 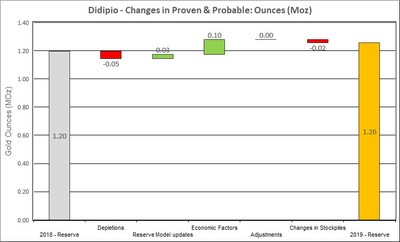 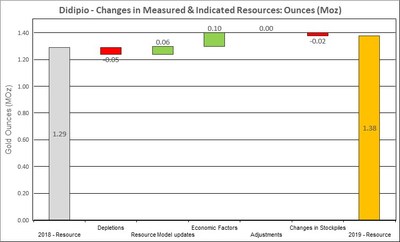 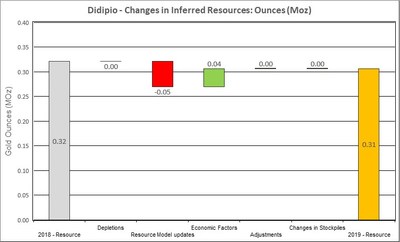 Michael Holmes, acting President and CEO of OceanaGold said, "Since 2015, we have focused on creating value for shareholders by investing in organic growth initiatives including exploration. These investments have yielded strong results, including the growth of Mineral Resources at the Martha Underground at Waihi, the Horseshoe Underground at Haile, and the discovery of additional resources at WKP in New Zealand."

"Since the acquisition of Waihi in 2015, our exploration team have delivered outstanding results through drilling. We have increased the mine life at the Correnso Underground and added significant Indicated and Inferred Resources at both Martha and WKP underground deposits."

As at December 31, 2019, the Company's Proven and Probable ("P&P") Reserves stood at 5.3 Moz of gold, 3.5 Moz of silver and 0.16 Mt of copper, representing on a consolidated basis, a 0.25 Moz year-on-year decrease net of mining depletion of 0.51 Moz in 2019. Drilling-related reserve growth, largely for Macraes and Haile open pits, offset over half of 2019 company-wide mining depletion.

As at December 31, 2019, the Company's Measured and Indicated ("M&I") Resources stood at 9.4 Moz of gold, 7.7 Moz of silver and 0.17 Mt of copper. On a consolidated basis, the Company increased M&I Resources by 0.80 Moz, year-on-year net of mining depletion (0.51 Moz), mainly due to drilling-related resource upgrades at the Waihi and Macraes operations.

Consolidated Inferred Resources, year-on-year, increased by 0.7 Moz to 4.3 Moz of gold, while silver and copper resources were 3.9 Moz and 0.03 Mt, respectively. Increase to total Inferred Resources include the first-time inclusion of an underground Inferred Resource for Palomino at Haile in the USA and increases due to drilling-related resource upgrades for WKP at Waihi and Round Hill / Golden Point at Macraes in New Zealand. These increases are over and above the successful conversion of Inferred Resources to Indicated Resources.

Combined open pit and underground P&P Reserves at Waihi as at December 31, 2019, stood at 0.10 Moz gold after mine depletion.

Notwithstanding the current suspension of exploration activities due to the New Zealand Government's order to temporarily suspend all "non-essential" business, the Company expects continued drilling at the Martha Underground with a focus on resource conversion later in the year. The Company has an additional exploration target of six to eight million tonnes with grades ranging from four to six grams per tonne within the Martha Underground project. This exploration target is based on the assessment of surface and underground drilling data collected by the Company in addition to the significant amount of historical and archived geological and mining data from over a century of mining activity at Waihi. The exploration target is conceptual in nature and exploration completed on this target to date is not sufficient to define an additional Mineral Resource above what has been reported. Drilling of this target is expected to continue for the next several years.

As at December 31, 2019, the P&P Reserves for Macraes stood at 1.1 Moz gold, with 1.0 Moz in the open pit and 0.06 Moz of gold in the Frasers Underground. Year-on-year drilling-related reserve growth has offset much of the 2019 mining depletion.

As at December 31, 2019, the Macraes M&I Resources stood at 3.5 Moz of gold, including 0.37 Moz in Frasers Underground. The year-on-year net increase in M&I Resources was due both to drilling-related open pit resource growth as well as lowered open pit cut-off grade, which was lowered from 0.4 g/t to 0.3 g/t Au, reflecting low cost stockpile processing scheduled in the latter years of the operation. Reductions (see adjustments in Figure 8) in Frasers Underground resources reflect the removal of resource in areas deemed too costly to access.

As at December 31, 2019, Macraes Inferred Resources stood at 0.9 Moz of gold, an increase from the previous year, due mainly to lowered cut-off grade which was partially offset by mining depletion and upgrading of Inferred Resources to the Indicated category. The Company will continue to drill multiple targets along the Hyde-Macraes Shear Zone with a focus on Golden Point Underground.

In December 2016, the Company announced the closure of the Reefton Mine and as a result, associated resources were removed from the Company's inventory.

Resources for the nearby Blackwater Project remain on the Company's inventory and remain unchanged from EOY 2018 reported resources.

P&P Reserves totalled 2.9 Moz of gold including 0.44 Moz of gold in the Horseshoe Underground. Total Mineral Reserves have reduced by 0.17 Moz net of resource growth, due to open pit mining depletion and to a lesser extent, application of TSF construction costs. The open pit cut-off grade has increased to 0.5 g/t from 0.45 g/t Au and resulted in a small reduction in the size of the reserve pit design.

Year-on-year, Inferred Resources have increased by approximately 0.5 Moz due to the addition of the underground Inferred Resource for the Palomino deposit. For 2020, the Haile exploration program will focus mainly on infill drilling within the open pit operations.

Palomino is located on a mineralised trend one kilometre southwest of the Horseshoe reserve (Figure 13). A total of 21 mineralised HQ and NQ diamond core holes have been drilled at the Palomino deposit and have been previously reported (see OceanaGold homepage). Half core samples of 1 to 3 metre lengths were dried, bagged and transported to an independent sample preparation facility, crushed to 2mm, riffle split and pulverised to 90% passing 150 mesh. A 30gm aliquot was then fire assayed with an Atomic Absorption finish.

Drilling to-date defines a mineralised package approximately 300 metres long with a 50-100 metre vertical extent by 100-150 metres wide (Figure 14).  Lozenge-shaped mineralised zones that strike east-northeast, dip moderately northwest and plunge gently northeast are identified within this package. The style of mineralisation is similar to the Horseshoe deposit with thick zones of fine-grain gold hosted by pyritic and silicified siltstone and intrusive rocks. The northeast margin of Palomino is bound by a barren, sub-vertical NNW-striking diabase dike while the southeast margin of Palomino is defined by the 70-750 SSE-dipping siltstone-dacite contact.

The estimate is based on an updated geological interpretation and a gold indicator shell. Grades were estimated by ordinary kriging into 5m x 5m x 5m blocks, rotated to align with the dominant foliation fabric and strike of mineralisation. The Inferred classification is based on an average 40m x 70m drill hole spacing.

High level mine designs and economic and sensitivity analyses were subsequently completed. Recoveries through the Haile processing plant of 85% were assumed. This work has provided the basis for reporting an underground Palomino Inferred Resource of 6.5 Mt @ 2.8 g/t Au for 0.6 Moz at a 1.49 g/t Au cut-off.

As at December 31, 2019, Didipio P&P Reserves stood at 1.3 Moz of gold, 2.7 Moz of silver and 0.16 Mt of copper, a small year-on-year increase net of mining depletion. The increase is largely due to lowered reserve reporting cut-off grade (0.87 g/t AuEq cut-off) in areas adjacent to development planned to access higher grade stoping areas (1.34 g/t AuEq cut-off). The reserves include 23 Mt of low and medium grade open pit stockpiles, 5.3 Mt of which are based upon a 0.27 g/t AuEq cut-off, the remainder based on an approximate 0.4 g/t AuEq cut-off.

As at December 31, 2019, Didipio M&I Resources stood at 1.4 Moz of gold, 2.9 Moz of silver and 0.17 Mt of copper, a moderate year-on-year increase net of mining depletion. The increase is largely due to lowered resource reporting cut-off grade (0.76 g/t AuEq cut-off) in areas adjacent to development planned to access higher grade stoping areas (1.16 g/t AuEq cut-off). This reporting reflects the revised mine design. The resources include 23 Mt of low and medium grade open pit stockpiles.

OceanaGold's interest in the Sam's Creek project in New Zealand remains unchanged at 20%.

OceanaGold Corporation is a mid-tier, high-margin, multinational gold producer with assets located in the Philippines, New Zealand and the United States. The Company's assets encompass the Didipio Gold-Copper Mine located on the island of Luzon in the Philippines. On the North Island of New Zealand, the Company operates the high-grade Waihi Gold Mine while on the South Island of New Zealand, the Company operates the largest gold mine in the country at the Macraes Goldfield which is made up of a series of open pit mines and the Frasers underground mine. In the United States, the Company operates the Haile Gold Mine, a top-tier, long-life, high-margin asset located in South Carolina. OceanaGold also has a significant pipeline of organic growth and exploration opportunities in the Americas and Asia-Pacific regions.

OceanaGold has operated sustainably since 1990 with a proven track-record for environmental management and community and social engagement. The Company has a strong social license to operate and works collaboratively with its valued stakeholders to identify and invest in social programs that are designed to build capacity and not dependency.

All Mineral Reserves and Mineral Resources were calculated as at December 31, 2019 and have been calculated and prepared in accordance with the standards set out in the Australasian Code for Reporting of Exploration Results, Mineral Resources and Ore Reserves dated December 2012 (the "JORC Code") and in accordance with National Instrument 43-101 of the Canadian Securities Administrators ("NI 43-101"). The JORC Code is the accepted reporting standard for the Australian Stock Exchange Limited ("ASX").

Messrs, Church, Doyle, Doelman, Maton and Townsend are full-time employees of the Company's subsidiary, Oceana Gold (New Zealand) Limited. Messrs Cooney, Hollett, Jones, Moore and O'Sullivan are full-time employees of the Company's subsidiary, OceanaGold Management Pty Limited. Both OceanaGold (Philippines) Inc. and Haile Gold Mine Inc. are subsidiaries of the Company. G. Hollett is a Professional Engineer (P.Eng) registered with Engineers and Geoscientists of British Columbia (P.Eng). Messrs Church, Cooney, Doelman, Doyle, Jones, Maton, Moore and Townsend are Members and Chartered Professionals with the Australasian Institute of Mining. T. O'Sullivan is a member of the Australian Institute of Geoscientists. All such persons are "qualified persons" for the purposes of NI 43-101 and have sufficient experience relevant to the style of mineralisation and type of deposit under consideration and to the activity which they are undertaking to qualify as a "competent person" as defined in the JORC Code.

The estimates of Mineral Resources and Reserves contained in this public release are based on, and fairly represent, information and supporting documentation prepared by the named qualified and competent persons in the form and context in which it appears.

For further scientific and technical information supporting the disclosure in this media release (including disclosure regarding Mineral Resources and Mineral Reserves, data verification, key assumptions, parameters, and methods used to estimate the Mineral Resources and Mineral Reserves, and risk and other factors) relating to the Didipio Gold-Copper Mine, the Macraes Mine, the Haile Gold Mine the Waihi Gold Mine and the Blackwater project, please refer to the following NI 43-101 compliant technical reports and the Blackwater Preliminary Economic Assessment released on 21 October 2014 available at www.sedar.com under the Company's name: