MELBOURNE, Nov. 8, 2017 /CNW/ - OceanaGold Corporation (TSX/ASX: OGC) (the "Company") is pleased to provide an update on its global exploration program across its assets in the Unites States, New Zealand and the Philippines. This exploration update follows the update provided to the market on 26 June 2017 ("June update") and results herein reflect activity completed after this date. 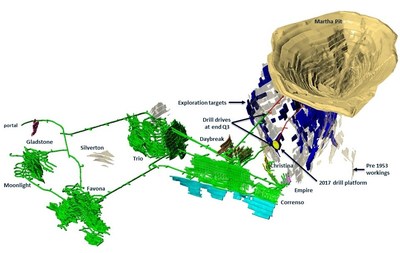 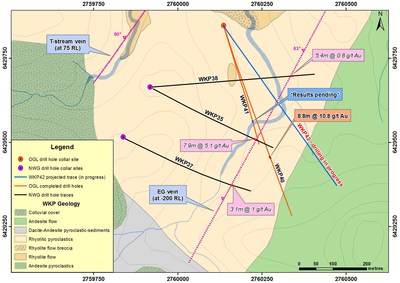 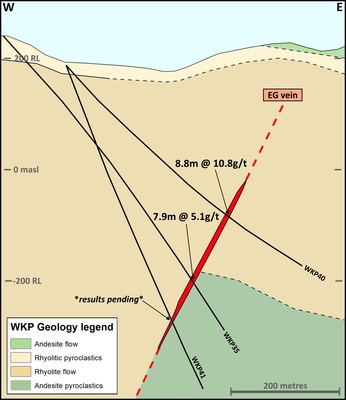 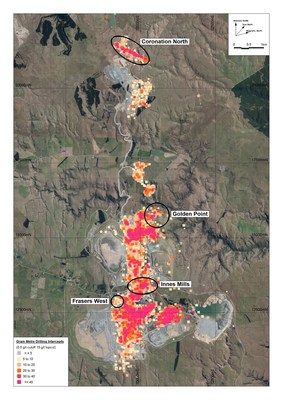 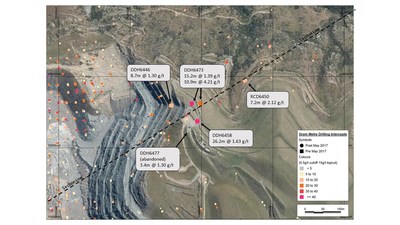 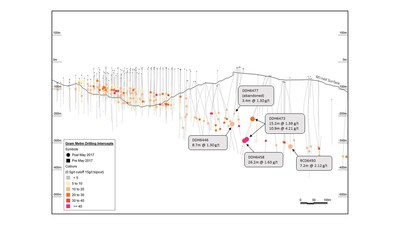 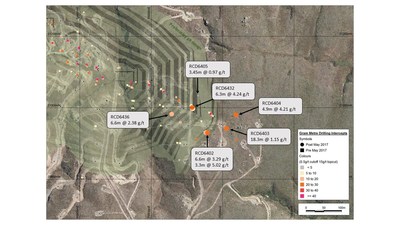 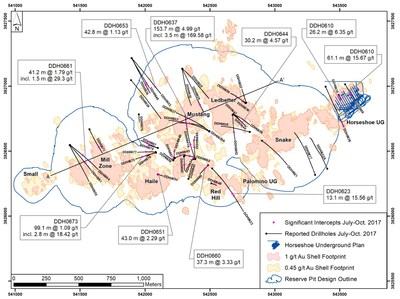 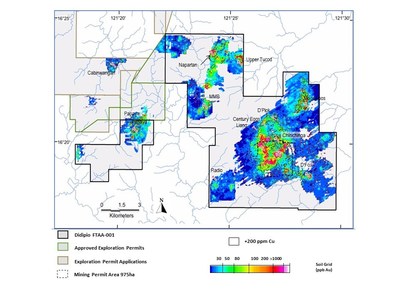 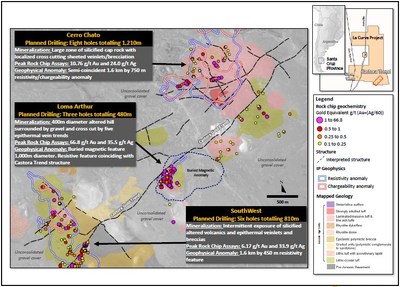 Mick Wilkes, President and CEO of OceanaGold said, "The latest round of drill results further demonstrate the significant potential that exists at each of our assets and in nearby greenfield areas. The investment in exploration and drilling is creating value for investors and supports our organic growth initiatives. The early drill results from the Martha Project demonstrate the exciting opportunity that may exist to materially increase the Waihi mine life, which could unlock significant value for the business."

He added, "Drilling at Haile indicates an opportunity to increase the in-pit resource plus good potential at depth on several underground targets following our success at Horseshoe. Our focus in the short term will remain on expanding the mineralisation within the optimised pit shell and establish the potential of other underground targets. At Macraes, we continue to find extensions of Coronation North which has the potential of further increasing the mine life of the operation while the strong results from drilling at Golden Point supports the Round Hill project."

Year-to-date, the Company has drilled a total of 172 holes for 31,693 metres from three underground and five surface drill rigs. Drilling continues to intersect encouraging widths and grades across multiple targets, adding incremental resource ounces through vein extensions to those currently being mined at Empire and Christina (Figure 3).

The Company continues to make good progress on the Martha Project exploration drill drives and has commenced drilling from the first drill cuddy on the 800RL drill drive. A total of 2,506 metres have been drilled from the 800RL drill drive since early August returning multiple significant intercepts (Tables 1 and 2). Favona and Gladstone infill drilling also continue to return encouraging intercepts (Table 3). The results support the resource development of the Martha Project where the Company has a significant resource target. Drilling from the 920RL drill drive is expected to commence before year end (Figure 3).

In July, the Company announced the commencement of drilling at the WKP target in the Hauraki region, approximately 10 kilometres to the north of Waihi. To date, two holes have been completed for a total of 1,202 metres, targeting the East Graben (EG) vein where historic drilling intercepted 7.9 metres @ 5.1 g/t Au (WKP35). The first hole of the current phase of drilling has returned 8.8 metres @ 10.84 g/t Au (Table 4) with assays pending throughout most of the hole. The second drill hole (assays pending) stepped approximately 100 metres down-dip from historic hole WKP35, while the third drill hole remains in progress approximately 120 metres to the north of WKP40 (Figures 2 and 3).

Year-to-date, the Company has drilled 209 holes for a total of 24,228 metres, utilising one underground drill rig and two surface drill rigs. Since the June update, the Company has completed a total of 115 holes for a total of 12,800 metres of which approximately 10,000 metres targeted mineralisation within optimised shells at Frasers West, Coronation North and Innes Mills (Figure 4). Drill results are being incorporated into updated resource models and will be reported in the annual Resource and Reserve update in March 2018.

Within the Golden Point and Coronation North deposits, drilling focused on extensions to known mineralisation. At Golden Point, five holes intercepted significant mineralisation (Table 5, Figures 5 and 6) with further drilling scheduled for the remainder of the year. At Coronation North six drill holes were completed targeting the down-plunge extension to the resource. Assay results from the six holes are comparable with those within the current optimised design (Table 5, Figure 7).

Since the release of the updated Haile National Instrument 43-101 Technical Report on August 10, 2017, the Company has drilled a total of 17,168 metres from four surface diamond drills. This drilling included 60 diamond drill holes for a total of 12,630 metres of resource definition and 15 diamond drill holes for a total of 4,538 metres of greenfields exploration. Resource definition drilling was primarily conducted at the Ledbetter, Mustang, Red Hill, Mill Zone and Snake deposits (Figures 8 and 9, Table 6). At Red Hill, 10 infill drill holes were completed with results presented in Table 6. Infill drilling continues at Mill Zone, with 17 of 37 drill holes completed. At Mustang-Ledbetter, 32 drill holes of a 46-hole program was completed, and at Snake, 8 holes of a 36-hole drill program have been completed.

Didipio underground infill drilling continued with 24 holes completed for a total of 3,810 metres drilled since the June update. All holes intersected mineralisation (Table 7).

At the Chinichinga prospect, one hole was drilled for a total of 567 meters and did not intersect significant mineralisation. Drilling at Napartan aims to test below coincident Au-Cu in soil anomalies and identified Au-Cu mineralised pegmatitic dykes, similar to those characterising the Didipio deposit.

At the Radio prospect, soil geochemistry identified at least three areas with anomalous gold in soils. These areas have been further tested with channel sampling at 24 locations, collecting 342 samples for multi-element analysis. Several channel samples yielded anomalous gold grades with the highest returning 8m @ 2.43 g/t Au, 7m @ 2.60 g/t Au, and 8m @ 1.63 g/t Au in the Bisang area. Some rock float and sub-crop immediately to the north of the Bisang area also yielded gold values as high as 6.9 g/t Au indicating a possible extension of the vein structure.

Exploration continues within the broader FTAA area (Figure 10) with detailed surface mapping and soil sampling at the D'Plok-Century Eggs-Liang, Papaya, and Radio prospects.

In May 2017, the Company entered into an option agreement with Mirasol Resources Ltd ("Mirasol") pursuant to which the Company has an option to earn up to 75% of interest in the La Curva Gold Project located in Santa Cruz Province, Argentina (Figure 11) ("La Curva"). Mirasol commenced a 2,500-metre diamond core drill campaign in October, and the exploration has outlined three gold prospects at Cerro Chato, Loma Arthur and SouthWest, situated along the six-kilometre-long "La Castora" Trend. These prospects represent compelling drill targets for high-grade, low sulfidation epithermal gold and silver mineralisation and are characterised by coincident large-scale outcropping alteration, IP geophysical anomalies, and anomalous rock chip assays ranging up to 66.8 g/t Au.  The current initial drill campaign is planned to deliver a shallow, 17-hole test of the Castora Trend targets. Additionally, a series of early-stage prospects have also been identified in the Curva West prospect where rock chip anomalies ranging up to 20.73 g/t Au and 153.6 g/t Ag are found in a prospective geological setting and represent future drill targets.

For further information in relation to the La Curva option agreement, please refer to Mirasol's news release dated May 25, 2017 and located at http://mirasolresources.com/mirasol-oceanagold-sign-definitive-exploration-option-agreement-la-curva-gold-project-santa-cruz-argentina/. All exploration data and disclosures related to LaCurva can be located on Mirasol's website and more specifically at http://mirasolresources.com/mirasol-commences-2500-m-drilling-campaign-la-curva-santa-cruz-argentina/

All drill data in relation to the Company's New Zealand, US and Philippines assets can be found on the Company's website at http://www.oceanagold.com/investor-centre/filings/. In line with ASX listing requirements, OceanaGold has appended the information required by JORC Table 1 for the New Zealand, US and Philippines results to its ASX announcement. JORC Table 1 is not required under National Instrument 43-101. Readers are referred to the ASX website at www.asx.com.au or the OceanaGold website at www.oceanagold.com to view JORC Table 1.

OceanaGold Corporation is a mid-tier, high-margin, multinational gold producer with assets located in the Philippines, New Zealand and the United States. The Company's assets encompass its flagship operation, the Didipio Gold-Copper Mine located on the island of Luzon in the Philippines. On the North Island of New Zealand, the Company operates the high-grade Waihi Gold Mine while on the South Island of New Zealand, the Company operates the largest gold mine in the country at the Macraes Goldfield which is made up of a series of open pit mines and the Frasers underground mine. In the United States, the Company recently commissioned the Haile Gold Mine, a top-tier asset located in South Carolina. OceanaGold also has a significant pipeline of organic growth and exploration opportunities in the Americas and Asia-Pacific regions.

OceanaGold has operated sustainably since 1990 with a proven track-record for environmental management and community and social engagement. The Company has a strong social license to operate and works collaboratively with its valued stakeholders to identify and invest in social programs that are designed to build capacity and not dependency.

The resources and exploration results were prepared in accordance with the standards set out in the 2012 Edition of the 'Australasian Code for Reporting of Exploration Results, Mineral Resources and Ore Reserves' ("JORC Code") and in accordance with National Instrument 43-101 – Standards of Disclosure for Mineral Projects of the Canadian Securities Administrators ("NI 43-101"). The JORC Code is the accepted reporting standard for the Australian Stock Exchange Limited ("ASX").