"This is a quarterly release with mixed emotion," commented David French, President and Chief Executive Officer. "We have lost a dear friend and leader in the passing of Rick George, the Chairman of the Board. His guidance and courage throughout Obsidian Energy's restructuring and re-emergence was instrumental to forging our new path. He leaves us with an imprint of the highest integrity and dedication to task that we will carry forward as a new Company. We wish his family peace through their immeasurable loss.

As our first quarter formally as Obsidian Energy, we are off to a solid start.  Despite limited activity in seasonal breakup conditions, we continued our operational momentum through the second quarter of 2017 to deliver strong production volumes and robust funds flow from operations.

As we look forward to our second half development program, we elected to reallocate and reduce our capital budget by $20 million to fit the current price environment yet our strong base production and early development results allow us to maintain production guidance. Company financials are stable with long term debt below $400 million, and we continue to actively extend our hedge book to underpin 2017 and 2018 development with a deep portfolio of investable projects across Alberta that work in a $45 to $55 West Texas Intermediate world.

The next several months will be very important as we embark on our most active development program in three years. We are well positioned to manage the current commodity environment and look forward to updating the market through the new lens of Obsidian Energy: disciplined, relentless, and accountable.

George Brookman, head of Obsidian Energy's Governance Committee, has assumed the role of Acting Chairman while the Board of Directors evaluates candidate options."

Financials are Stable and Strong

Early Development Wins are Setting a Solid Stage for 2018

Obsidian Energy holds a focused portfolio with industry leading positions in the Cardium, Peace River, and Alberta Viking areas. The table below outlines select metrics in our key development and legacy areas for the three and six months ended June 30, 2017 and excludes the impact of hedging:

The table below provides a summary of our operated activity during the second quarter:

We are adjusting our 2017 development plans to reduce our full-year capital budget by $20 million to $160 million. Most of the capital changes are related to projects that were intended to extend our double-digit percent growth trajectory through next year.

Due to continued high production volumes from last winter's drilling program and a strong outlook for our second half development program, we do not expect the capital reductions to have a material effect on our full-year operational results. In our second half development program, we expect the majority of our new wells will be brought on production late in the third quarter or early in the fourth quarter. We remain confident in our ability to demonstrate self-funded double-digit percent growth from the fourth quarter of 2016 to the fourth quarter of 2017 and to meet our full year 2017 production guidance of 30,500 to 31,500 boe per day.

Our hedging program helps reduce the volatility of our funds flow from operations, and thereby improves our ability to manage our ongoing capital programs. We target having hedges in place for approximately 25 percent to 50 percent of our crude oil exposure, net of royalties, and 20 percent to 50 percent of our gas exposure, net of royalties. Refer to the "Financials are Stable and Strong" section for more information on our current hedging levels.

A conference call will be held to discuss the second quarter results above at 6:30 am Mountain Time (8:30 am Eastern Time) on Wednesday, August 9, 2017.

An updated corporate presentation, the second quarter management's discussion and analysis and the unaudited consolidated financial statements will be available on the Company's website at www.obsidianenergy.com, on SEDAR at www.sedar.com, and on EDGAR at www.sec.gov on the same date.

Oil and Gas Information AdvisoryBarrels of oil equivalent ("boe") may be misleading, particularly if used in isolation. A boe conversion ratio of six thousand cubic feet of natural gas to one barrel of crude oil is based on an energy equivalency conversion method primarily applicable at the burner tip and does not represent a value equivalency at the wellhead. Given that the value ratio based on the current price of crude oil as compared to natural gas is significantly different from the energy equivalency conversion ratio of 6:1, utilizing a conversion on a 6:1 basis is misleading as an indication of value.

See "Calculation of Funds Flow from Operations" below for a reconciliation of funds flow from operations to its nearest measure prescribed by IFRS. Netback is the per unit of production amount of revenue less royalties, operating expenses, transportation and realized risk management gains and losses, and is used in capital allocation decisions and to economically rank projects. See "Results of Operations – Netbacks" above for a calculation of the Company's netbacks. Gross revenue is total revenues including realized risk management gains and losses on commodity contracts and is used to assess the cash realizations on commodity sales.

Calculation of Funds Flow from Operations

Forward-Looking StatementsCertain statements contained in this document constitute forward-looking statements or information (collectively "forward-looking statements") within the meaning of the "safe harbour" provisions of applicable securities legislation. Forward-looking statements are typically identified by words such as "anticipate", "continue", "estimate", "expect", "forecast", "budget", "may", "will", "project", "could", "plan", "intend", "should", "believe", "outlook", "objective", "aim", "potential", "target" and similar words suggesting future events or future performance. In addition, statements relating to "reserves" or "resources" are deemed to be forward-looking statements as they involve the implied assessment, based on certain estimates and assumptions, that the reserves and resources described exist in the quantities predicted or estimated and can be profitably produced in the future. In particular, this document contains forward-looking statements pertaining to, without limitation, the following: that we are well positioned to manage the current commodity environment;  our expected percentage production growth rate; our expected approach to development including the area-specific asset development plans described herein; our expectations for operating costs during the year and the associated target range for those costs per boe (net of carried expenses); our capital spending plans in 2017 and that: (i) most of the capital changes are on projects that were intended to extend our double digit growth through the next year and (ii) we do not expect the capital reductions to have a material effect on our full-year operational results; the timing of development and operational activities; the expectations for timing for certain wells to be on production;  how certain gas wells will be processed which will minimize processing costs; that we remain confident in our ability to demonstrate self-funded double digit percentage growth from the fourth quarter of 2016 to the fourth quarter of 2017 and meeting our full year 2017 production guidance; and our hedging program and its ability to reduce the volatility of our funds flow from operations and thereby improves our ability to manage our ongoing capital programs.

With respect to forward-looking statements contained in this document, we have made assumptions regarding, among other things: 2017 prices of US$54.07 per barrel of West Texas Intermediate light sweet oil and C$3.32 per mcf AECO gas, and a C$/US$ foreign exchange rate of $1.32; that we do not dispose of any material producing properties; our ability to execute our long-term plan as described herein and in our other disclosure documents and the impact that the successful execution of such plan will have on our Company and our shareholders; that the current commodity price and foreign exchange environment will continue or improve; future capital expenditure levels; future crude oil, natural gas liquids and natural gas prices and differentials between light, medium and heavy oil prices and Canadian, WTI and world oil and natural gas prices; future crude oil, natural gas liquids and natural gas production levels; future exchange rates and interest rates; future debt levels; our ability to execute our capital programs as planned without significant adverse impacts from various factors beyond our control, including weather, infrastructure access and delays in obtaining regulatory approvals and third party consents; our ability to obtain equipment in a timely manner to carry out development activities and the costs thereof; our ability to market our oil and natural gas successfully to current and new customers; our ability to obtain financing on acceptable terms, including our ability to renew or replace our syndicated bank facility and our ability to finance the repayment of our senior notes on maturity; and our ability to add production and reserves through our development and exploitation activities.

Although we believe that the expectations reflected in the forward-looking statements contained in this document, and the assumptions on which such forward-looking statements are made, are reasonable, there can be no assurance that such expectations will prove to be correct. Readers are cautioned not to place undue reliance on forward-looking statements included in this document, as there can be no assurance that the plans, intentions or expectations upon which the forward-looking statements are based will occur. By their nature, forward-looking statements involve numerous assumptions, known and unknown risks and uncertainties that contribute to the possibility that the forward-looking statements contained herein will not be correct, which may cause our actual performance and financial results in future periods to differ materially from any estimates or projections of future performance or results expressed or implied by such forward-looking statements. These risks and uncertainties include, among other things: the possibility that we will not be able to continue to successfully execute our long-term plan in part or in full, and the possibility that some or all of the benefits that we anticipate will accrue to our Company and our securityholders as a result of the successful execution of such plans do not materialize; the possibility that we are unable to execute some or all of our ongoing asset disposition program on favourable terms or at all; general economic and political conditions in Canada, the U.S. and globally, and in particular, the effect that those conditions have on commodity prices and our access to capital; industry conditions, including fluctuations in the price of crude oil, natural gas liquids and natural gas, price differentials for crude oil and natural gas produced in Canada as compared to other markets, and transportation restrictions, including pipeline and railway capacity constraints; fluctuations in foreign exchange or interest rates; unanticipated operating events or environmental events that can reduce production or cause production to be shut-in or delayed (including extreme cold during winter months, wild fires and flooding); and the other factors described under "Risk Factors" in our Annual Information Form and described in our public filings, available in Canada at www.sedar.com and in the United States at www.sec.gov. Readers are cautioned that this list of risk factors should not be construed as exhaustive. 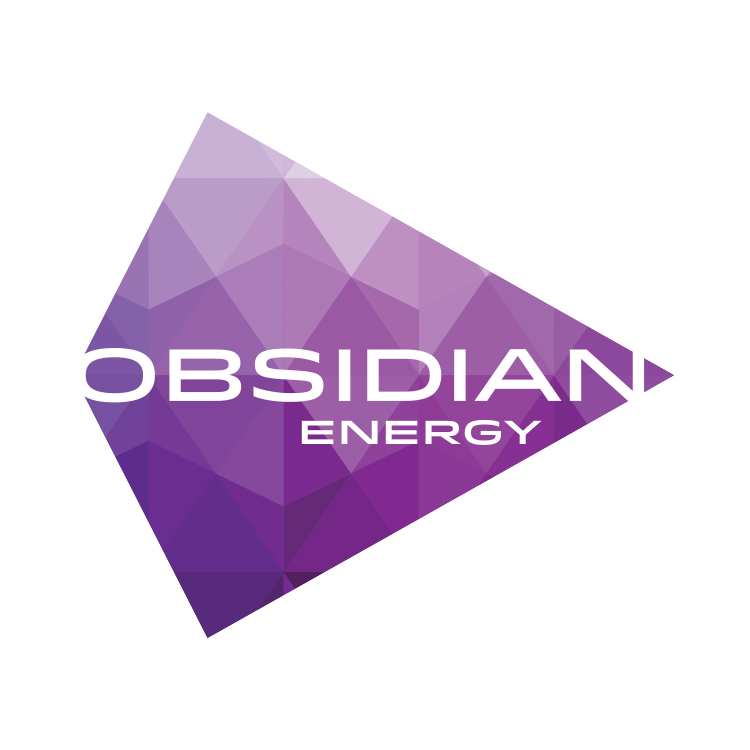 Obsidian Energy is an intermediate-sized oil and gas producer with a well-balanced portfolio of high-quality assets based in Western Canada. Obsidian Energy is a company based on discipline, relentless passion for the work we do, and resolute accountability to our...