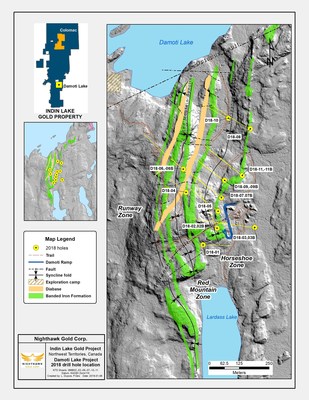 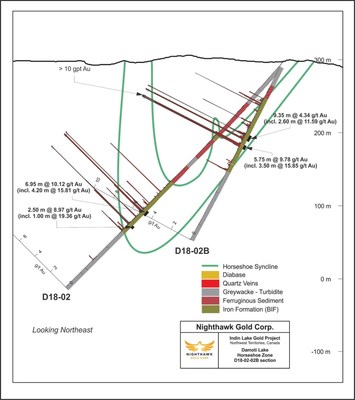 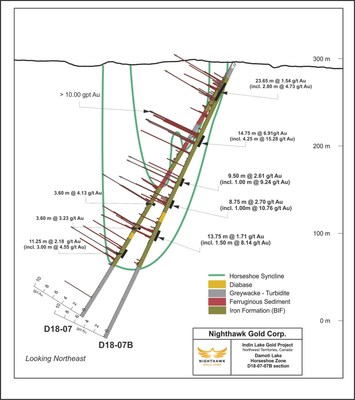 Dr. Michael Byron, President and CEO commented, "While Nighthawk has not drilled Damoti since 2010, we were eager to resume activities as it represents a unique high-grade, near-surface deposit, one that we consider of great value as potential feed to augment possible future Colomac mine development. Damoti also supports our belief that similar high-grade opportunities exist throughout the Indin Lake Gold Camp. The consolidation of this camp, including all of its many deposits and showings, gives us control of its vast yet underexplored potential.

"Our 2009 and 2010 drill programs were mainly directed at validating and expanding the main deposit, while the 2018 drilling was aimed at testing geological exploration targets outside the main body, in search of new growth opportunities. Additional drilling and exploration work will be contingent upon the incorporation of all drill results to-date into an expanded geological model to assist in target generation and resource evaluation."

Nighthawk intends to expand on this potential as it considers Damoti an important satellite deposit that also has a ramp developed into its core, which could provide possible high-grade feed for any future development opportunity at the Company's flagship asset, Colomac.

* These historical resource calculations are believed relevant but should not be relied upon until verified. These historical estimates did not use mineral resource categories as stipulated in NI 43-101.** The 2005 resource was calculated using an 8.00 gpt Au cutoff in order to facilitate the evaluation of a small, high-grade mining operation restricted to the Horseshoe Zone.

*Lengths are reported as core lengths. True widths have not yet been calculated.

D18-03 and 03B where drilled 100 metres below the southern fold nose of the Horseshoe Syncline. They were collared to explore directly below the core of Horseshoe, an area that had never been drilled to depth. If the host stratigraphy repeated to depth, and given that this region is overlain by the deposit's best mineralization, then it was important to test this area for stratigraphic repetition. Although mineralization was encountered, the holes did not intersect grades typical of the overlying deposit.

Two holes, D18-08 and D18-10, were drilled 450 metres north of the main body of Horseshoe (Figure 1) in an area that had never been drilled. The intention was to generate a continuous intersection, or drill fence, from the east limb of the syncline to its west limb, and to test an area in the central portion of the fold where two converging magnetic high features are located. The holes intersected their intended targets but did not encounter significant mineralization.

Holes D18-11 and 11B tested a pronounced flexure in the eastern limb of the Horseshoe Syncline 80 metres northeast of the D18-09 holes. Both holes intersected modest mineralization highlighted by a D18-011 intersection at depth within the base of the western fold limb of 2.25 metres of 7.43 gpt Au.

Three holes were drilled from two setups within the north central portion of Red Mountain (Figure 1).  Hole D18-04 was drilled to infill a gap in previous drill coverage within the eastern limb of the Red Mountain Syncline. The hole intersected moderate mineralization throughout highlighted by 3.00 metres of 4.96 gpt Au. Holes D18-06 and 6B were collared 100 metres north, in an area that had never been drilled and would effectively, in collaboration with holes D18-07 and 07B located to the east, provide a drill fence across both major fold structures (Figure 1).  D18-06, the shallower hole, was drilled along the east limb of the fold and into the western limb at depth intersecting 8.65 metres of 1.89 gpt Au, including 1.50 metres of 6.14 gpt Au, before exiting the base of the fold where it continued to test the northern Runway Zone ("Runway"), intersecting moderate mineralization 190 metres from surface. Hole D18-06B intersected mineralization throughout the eastern fold limb highlighted by a near-surface cut of 4.25 metres of 3.31 gpt Au, including 1.25 metres of 10.22 gpt Au, and a deeper intersect of 5.25 metres of 2.46 gpt Au, including 1.25 metres of 7.94 gpt Au (Table 2). This drilling represents a new discovery of mineralization within this northern part of the Red Mountain Syncline, and one that remains open.

Drilling to date has confirmed Nighthawk's belief that given the relatively shallow nature and continuity of high-grade gold mineralization within the core of Damoti, that it constitutes a valuable asset to be considered in conjunction with any future plans to develop the Company's flagship asset, Colomac. Feed from such a shallow satellite deposit, that already has a ramp developed into its high-grade core, would be highly coveted by any mining operation. Based on recent drilling, Nighthawk is currently evaluating its options to generate a maiden resource estimate on Damoti, which would allow for better economic modelling regarding the impacts that such satellite deposits might have on Colomac, and on the ongoing evolution of its regional exploration programs. Additional drilling and exploration work will be contingent upon the incorporation of the present drill results into an expanded geological model to assist in target generation and evaluation.

In 2009 and 2010 Nighthawk drilled 69 holes (13,647 metres) to test known zones and explore for new opportunities (Table 3).  The exploration programs were principally designed to expand the main deposit and consisted of historical data compilation, auditing of historical resource estimates, construction of a new three-dimensional deposit model, as well as defining and drill testing targets. A total of 7,390 metres were drilled at Horseshoe, the principal part of the deposit, successfully infilling priority areas within the historical resource and extending mineralized zones along strike and to depth. Drilling also focused along mineralized structures immediately west of Horseshoe within Red Mountain (2,341 metres), and Runway (400 metres). Results have shown excellent grade, widths, and continuity of gold mineralization. Areas of high-grade mineralization are developed along the keel of the fold and in association with parasitic folds along the limbs, and as discrete mineralized zones that crosscut the main unit. New gold zones were discovered within the lower west limb and keel areas of the Horseshoe and Red Mountain synclines that remain open.

The BIF Island Zone ("BIF Island"), an area of folded iron formation like Horseshoe, is located 3.5 kilometers along strike to the northeast. The Company completed 3,153 metres of drilling at BIF Island to extend known mineralization. Holes intersected broad zones of gold mineralization containing high-grade cores.  This area was not drilled during the 2018 program.

Damoti is an important piece of the Indin Lake Gold Property and was one of the main drivers to the consolidation of the camp. It illustrates the opportunity that the regional assets represent in terms of potential grade and contained gold ounces in strengthening Nighthawk's 100% controlled Indin Lake Gold Camp, centred around Colomac, a mutli-million-ounce deposit with demonstrated growth potential.

Nighthawk has implemented a quality-control program to comply with best practices in the sampling and analysis of drill core.  Drill core samples were transported in security-sealed bags for analyses at ALS Global Assay Laboratory in Vancouver, BC ("ALS Global").  ALS Global is an ISO/IEC 17025 accredited laboratory. Pulp and metallics assaying for gold was conducted on the entire pulverized sample.

As part of its QA/QC program, Nighthawk inserts external gold standards (low to high grade) and blanks every 20 samples in addition to the standards, blanks, and pulp duplicates inserted by ALS Global.

The Company has an experienced and dedicated team and is well funded to complete its goals and objectives over the next 12-18 months.

Dr. Michael J. Byron, Ph.D., P.Geo., President & Chief Executive Officer of Nighthawk, who is the "Qualified Person" as defined by NI 43-101 for this project, has reviewed and approved of the technical disclosure contained in this news release. Please refer to NI 43-101 technical report "Technical Report and mineral resource estimate update on the Colomac Property of the Indin Lake Project", dated June 13, 2018, as filed under the company's profile on www.sedar.com.

This news release contains "forward-looking information" within the meaning of applicable Canadian securities legislation. Forward-looking information includes, but is not limited to, information with respect to the Company's exploration plans at Damoit, including additional drilling programs and the timing and results thereof; the ability to produce a NI 43-101 resource estimate for Damoti, and the timing and results thereof; and any potential mining scenario at Colomac, and the ability for any of the satellite deposits to be considered economic to supplement such mining operation. Generally, forward-looking information can be identified by the use of forward-looking terminology such as "plans", "expects", or "does not expect", "is expected", "budget", "scheduled", "estimates", "forecasts", "intends", "anticipates", or "does not anticipate", or "believes" or variations of such words and phrases or state that certain actions, events or results "may", "could", "would", "might", or "will be taken", "occur", or "be achieved".

Forward-looking information is based on the opinions and estimates of management at the date the information is made, and is based on a number of assumptions and is subject to known and unknown risks, uncertainties and other factors that may cause the actual results, level of activity, performance or achievements of Nighthawk to be materially different from those expressed or implied by such forward-looking information, including risks associated with the exploration, development and mining such as economic factors as they effect exploration, future commodity prices, changes in foreign exchange and interest rates, actual results of current exploration activities, government regulation, political or economic developments, environmental risks, permitting timelines, capital expenditures, operating or technical difficulties in connection with development activities, employee relations, the speculative nature of gold exploration and development, including the risks of diminishing quantities of grades of reserves, contests over title to properties, and changes in project parameters as plans continue to be refined as well as those risk factors discussed in Nighthawk's annual information form for the year ended December 31, 2017, available on www.sedar.com.