VANCOUVER, Sept. 10, 2019 /CNW/ - Mako Mining Corp. (TSX-V: MKO) ("Mako" or the "Company") is pleased to report the discovery of the Bayacun Zone at the Las Conchitas area of its San Albina-Murra property located in Nueva Segovia, Nicaragua.

Six drill holes, totaling 314 m were drilled around the historic Bayacun mine, approximately three kilometers south of the San Albino gold project, which is currently under construction (see attached map).  All six holes encountered gold mineralization, with the occurrence of visible gold in several of them. 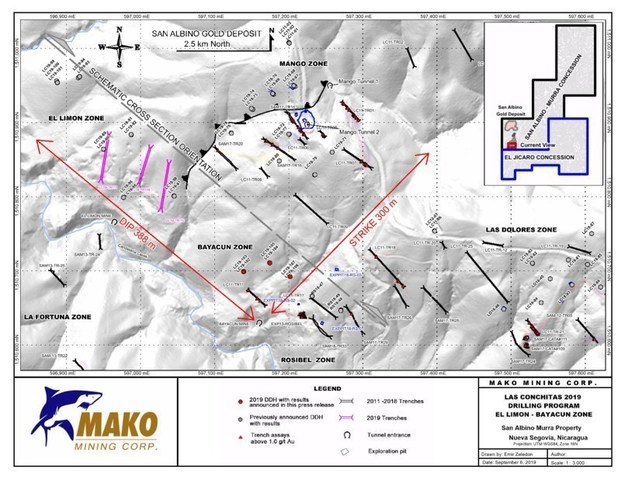 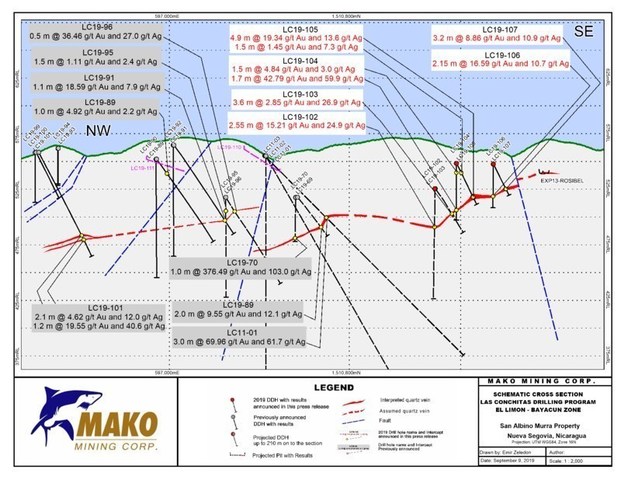 The purpose of the drilling at the historic Bayacun mine was to test an underexplored area along a larger and potentially mineralized trend between the Mango Zone to the north (see press releases dated May 6, 2019 and May 21, 2019) and the Las Dolores Zone to the east (see press release dated July 25, 2019).  The new Bayacun Zone is trending in a northeast-southwest direction, and shallowly dips to the northwest, representing a potential southeast extension of the Mango Zone.  Further drilling is planned for later this year, to confirm whether the Bayacun Zone connects to these surrounding zones, which could significantly expand the strike and dip of the Las Conchitas area.

The six drill holes mark the first modern exploration work in this area.  The Company had previously sampled what appeared to be a historic stockpile near a tunnel in 2012 which returned 34.90 g/t Au and 42.4 g/t Ag (see press release dated March 21, 2012).  Limited underground production occurred at the historic Bayacun mine until the early 1900's, with the extracted material being transported further south to the nearby El Golfo mill for processing.  The mill, along with the historic El Golfo mine, are located within Mako's El Jicaro concession, an area which the Company plans to drill for the first time later this year.

Akiba Leisman, Chief Executive Officer of Mako, states "discoveries are the lifeblood of all mining companies.  The fact that Mako has been able to deliver these kinds of results where only a single drill rig is focused on step-out exploration is a testament to our geological team and their increasing understanding of our rare, near surface orogenic gold belt.  This bodes very well for later in the year when the Company plans to move the four drill rigs currently focused on infill drilling at San Albino to Las Conchitas and the numerous unexplored targets throughout the Company's 138 square kilometer land package."

Furthermore, 50 m to the southeast of the Bayacun Zone is the Rosibel Zone, where a highly mineralized, shallow-dipping quartz vein was exposed in an exploration pit.  The vein contains galena, arsenopyrite and visible gold.  Vertical sampling returned 29.30 g/t Au and 44.7 g/t Ag over 1.5 m.  Further step-out drilling is planned to test the continuity of near surface, high-grade gold mineralization and increase the Company's understanding of the overall grade and size of the Bayacun Zone discovery.

The mineralized intervals shown above utilize a 1.0 g/t gold cut-off grade with not more than 1.0 meter of internal dilution. *Lengths are reported as core lengths. True widths vary depending on drill hole dip, the veins are shallow dipping and typical true widths are 85-100% of the downhole width. **All reported drill results in this press release used the metallic screening method.

Drill core was continuously sampled from inception to termination of the drill hole.  Sample intervals were typically one meter.  Drill core diameter was HQ (6.35 centimeters).  Geologic and geotechnical data was captured into a digital database, core was photographed, then one-half split of the core was collected for analysis and one-half was retained in the core library.  Samples were kept in a secured logging and storage facility until such time that they were delivered to the Managua facilities of Bureau Veritas and pulps were sent to the Bureau Veritas laboratory in Vancouver for analysis.  Gold was analyzed by standard fire assay fusion, 30 gram aliquot, AAS finish.  Samples returning over 10.0 g/t gold are analyzed utilizing standard Fire Assay-Gravimetric method.  Due to the presence of coarse gold, the Company has used 500-gram metallic screened gold assays for analyzing samples that yielded a fire assay result greater than 1 g/t, and samples immediately above and below drilled veins.  This method, which analyzes a larger sample, can be more precise in high-grade vein systems containing coarse gold. All reported drill results in this press release used the metallic screening method.  The Company follows industry standards in its QA&QC procedures. Control samples consisting of duplicates, standards, and blanks were inserted into the sample stream at a ratio of 1 control sample per every 10 samples.  Analytical results of control samples confirmed reliability of the assay data.  No top cut has been applied to the reported assay results.

John M. Kowalchuk, P.Geo, a geologist and qualified person (as defined under National Instrument 43-101) has read and approved the technical information contained in this press release. Mr. Kowalchuk is a senior geologist and a consultant to the Company.

Forward-Looking Statements:  Some of the statements contained herein may be considered "forward-looking information" within the meaning of applicable securities laws.  Forward-looking information is based on certain expectations and assumptions, including that the Company's exploration and in-fill drilling programs will be successfully completed; that any outstanding assay results will be as anticipated; that the newly discovered Bayacun Zone represents a potential southeast extension of the Mango Zone; in the event that the Bayacun Zone connects to the surrounding zones, it could significantly expand the strike and dip of the Las Conchitas area; that the intercepts as noted in this presss release are shallow enough to be amenable to open pit mining; the planned first time drilling in the area near Mako's El Jicaro concession will occur later this year; that the plans of the Company to move the four drill rigs currently focused on infill drilling at San Albino to Las Conchitas and the numerous unexplored targets throughout the Company's 138 square kilometer land package will occur later this year; that the planned further step-out drilling to test the continuity of near surface, high-grade gold mineralization to increase the Company's understanding of the overall grade and size of the Bayacun Zone discovery will be successful. Such forward-looking information is subject to a variety of risks and uncertainties which could cause actual events or results to differ materially from those reflected in the forward-looking information, including, without limitation, the risks that additional satisfactory exploration results at the Bayacun Zone and the Rosibel Zone will not be obtained; that the Company will be able to successfully adjust its mine plan based on anticipated successful drilling results; that although the Company's production decision at its San Albino project is not based on a technical study supporting mineral reserves, and therefore not based on demonstrated economic viability, management currently believes the project is on track to achieve its first gold pour by the late summer of 2020; that the Company will be successful in any proposed financing plans necessary for the construction at the San Albino project. that the PEA is preliminary in nature and there is no certainty that the PEA will be realized; the risk of economic and/or technical failure at the San Albino project associated with basing a production decision on the PEA without demonstrated economic and technical viability; that exploration results will not translate into the discovery of an economically viable deposit; risks and uncertainties relating to political risks involving the Company's exploration and development of mineral properties interests; the inherent uncertainty of cost estimates and the potential for unexpected costs and expense; commodity price fluctuations, the inability or failure to obtain adequate financing on a timely basis and other risks and uncertainties as outlined in the continuous disclosure documents of the Company filed on SEDAR at www.sedar.com.  The forward-looking information contained herein represents management's best judgment as of the date hereof, based on information currently available and is included for the purposes of providing investors with the Company's plans and expectations at its San Albina-Murra property and may not be appropriate for other purposes.  Mako does not undertake to update any forward-looking information, except in accordance with applicable securities laws.