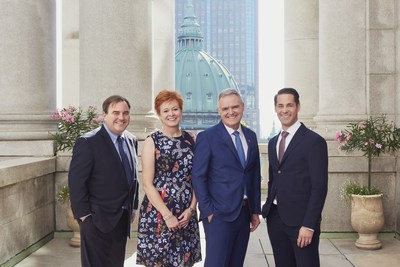 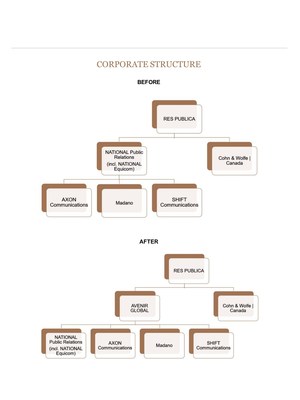 "The reshaping of operations under AVENIR GLOBAL reflect the Firm's presence as an innovative global company with a management philosophy that values a long-term growth strategy and that puts its people and clients at the centre of decision-making", said Jean-Pierre Vasseur, President and CEO of AVENIR GLOBAL. "Our vision is to build the global footprint of our Firm by aggregating companies and talent to deliver value for our clients."

The Firm, which began as two-person Montreal-based public relations consultancy in 1976, is now ranked among the top 25 largest PR agencies in the world, with 550 employees and 60% of revenue coming from outside of Canada. In addition to sustained organic growth over the years, key recent acquisitions include Madano (2013), TMX Equicom (2015) and SHIFT Communications (2016).

"NATIONAL is the right name for our Canadian operations, but was becoming less relevant as a name for our platform as we expanded internationally. The AVENIR GLOBAL name represents our ambition while recognizing our heritage−'Avenir' being the French word for 'future'", added Mr. Vasseur.

"This is a great Canadian story", said Andrew Molson, Chairman of AVENIR GLOBAL. "We have successfully charted the course from local to national to global over the last 40 years, all the while helping our clients make meaningful connections in the communities in which we operate. The NATIONAL brand will remain strong in Canada while we pursue our long-term growth strategy through AVENIR GLOBAL, seeking out acquisitions which will help us maintain and diversify our international client base and capabilities."

The Firm will retain the same leadership team based at the head office in Montreal, with Andrew Molson as chairman and Jean-Pierre Vasseur as president and CEO of AVENIR GLOBAL. The Firm's brands will continue to operate within the same business models, seeking out a best teams' approach of discipline and sector experts across the network to best meet the needs of their clients.

AVENIR GLOBAL is a Montreal-based holding and management company with an active operations mindset and a hands-on approach to all its investments. With 550 staff and 17 offices in Canada, the U.S. and in Europe, it is considered one of the 25 most important public relations firms in the world. In Canada, AVENIR GLOBAL owns NATIONAL Public Relations, the country's leading public relations firm, servicing clients across a wide range of sectors, with offices in Vancouver, Calgary, Toronto, Ottawa, Montreal, Quebec City, Saint John, Halifax and St. John's, and NATIONAL Equicom, the industry's foremost investor relations and financial services practice with offices in Toronto, Montreal and Calgary. The AVENIR GLOBAL network also includes healthcare specialists AXON Communications, with offices in New York, Toronto, London, Copenhagen and Zug (Switzerland); Madano, a strategic communications consultancy based in London; and SHIFT Communications, an integrated communications agency with offices in Boston, San Francisco, New York and Austin.AVENIR GLOBAL is owned by RES PUBLICA Consulting Group.