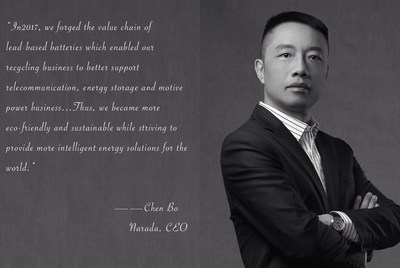 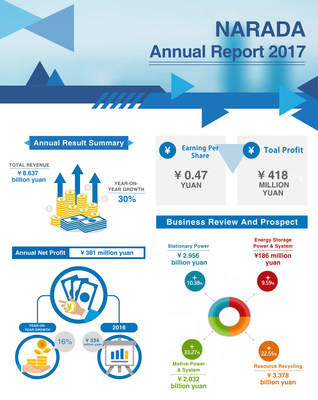 Narada's battery business contributed 5.174 billion yuan, among those the growth rate of stationary power, energy storage power & systems, and motive power & systems was 10.38%, 9.59%, and 33.27% respectively. Narada is improving the industrial chain, enhancing the recovery capacity of lead, the resource recycling generated revenue of 3.378 billion yuan through recycling 210,000 tons of lead per year.

Narada started as a battery manufacturer and retailer and now has made significant inroads in providing system solutions and operation services for power generation, storage and recycling, forming an entire industrial chain. Through its efforts in sustainable development, Narada has acquired 49% equity in Huabo Technology, a leading player in China's battery recycling industry, making it a wholly-owned subsidiary. In the future, the capacity of Huabo Technology in lead battery recycling will exceed one million tons.

The energy storage station project with a capacity of 160MWh built by Narada in Wuxi Singapore Industrial Park was put into operation and participated in the power demand-side response service for Jiangsu province in February 2018. The station is the largest commercial energy storage station now. It is also the first example of an electrochemical energy storage system providing electric power ancillary services in China, according to the annual report.

Narada has successfully put the Qinghai Huaneng Integrated Photovoltaic Energy Storage Station into operation, which is the first distributed DC side photovoltaic energy storage station. It marks Narada's leap from the industrial and commercial customer side to renewable energy generation.

Narada has a 50MW frequency regulation project slated for two German frequency control and energy storage developers. The cooperation is a symbol of Narada entering the mainstream power auxiliary services market in Europe and the United States.

In terms of motive power & systems, Narada has invested in powertrain system projects to enhance the integration capacity of new energy vehicles. The revenue of a motive battery for electric bicycles has jumped 57.94% on a year-on-year basis. Narada also tapped into the overseas motive battery market with sealed deals in the Netherlands, the UK and Thailand.

The annual report also shows solid development in Narada's R&D sector. By the end of 2017, it held 104 valid patents, including 45 for inventions, 41 for utility models and 18 for exterior designs. The revenue from R&D accounted for 3.03% of the total.

Founded in 1994, Narada Power Source Co., Ltd. is an international energy company specializing in storage solution for both residential and large-scale projects. Narada is based in Hangzhou in Zhejiang province and has established a global sales and services network in more than 150 countries.