COAST SALISH TERRITORY, VANCOUVER, Aug. 14, 2018 /CNW/ - Musqueam peoples and many others are fishing the biggest Salmon return in years on the Stó:lō / Fraser river.  At 23:45 on August 13th, Musqueam First Responders received a call from Coast Guard informing them that a tug boat capsized at Deering Island and began their Emergency Response procedures immediately, including absorbent boom placement to soak up any spills at the mouth of the Musqueam Slough. 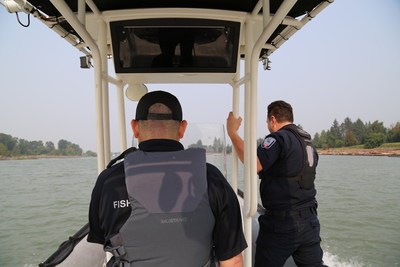 "The tugboat fuel spill in the middle of the night is of great concern to us. Despite repeated requests and countless meetings we have received no federal support from OPP for our involvement in the protection of our waters and coastline" Chief Sparrow stated.  "This is a working river and the infrastructure that exists and is planned, and the impact of what has happened with this immediate situation is an indication of what is to come as far as additional tanker traffic, barges and pollution.  We are not in opposition to Canada's plan on industrialization of the river, but we need to be there at the front of any kind of emergency response, period."

From August 21-23, 2018 the federal Cabinet will have a retreat in Nanaimo to discuss international trade including infrastructure development and that of their perceived success with the historic Oceans Protection Plan (OPP) launched in 2016, a $1.5 billion-dollar investment to improve marine safety and responsible shipping to protect the marine environment and offer new possibilities for Indigenous and coastal communities.

"We are disappointed and concerned that the Oceans Protection Plan has failed to provide support for the necessary tools and capacity for responding and managing emergencies in Musqueam Territory.  Musqueam has deployed existing limited staff and experts to monitor the containment and clean up – all without any assistance or linkages to the Oceans Protection Plan" AFO Fisheries Manager and Councillor, Morgan Guerin added.

The Musqueam Indian Band (Musqueam) have been stewards and responsible guardians of their territory since time immemorial. Our territory is the terminus of the internationally renowned and ecologically critical Fraser River, one of the largest salmon rivers in the world and is home to the last wild Coho salmon stream in Vancouver. Over the last 150 years a world class urban city (Vancouver) has grown within Musqueam territory.  Musqueam has always vigorously defended our inherent rights to access and benefit from the resources within our territory.  These rights have been bestowed to Musqueam, not from the Crown of England, nor any foreign government; these are rights that stem from Musqueam having occupied our territory and waters since time immemorial.  www.musqueam.bc.ca