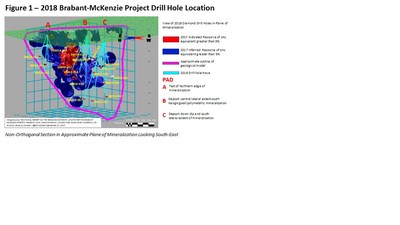 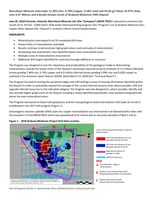 The Program was designed to test the robustness and predictability of the geological model in determining mineralization outside the known limits of the Deposit's previously reported resource estimate of 1.5 million indicated tonnes grading 7.46% zinc, 0.70% copper and 4.5 million inferred tonnes grading 5.99% zinc and 0.62% copper as outlined in the technical report filed on SEDAR, dated March 13, 2018 (the "Technical Report").

The Program focused on testing the peripheral edges and infill drilling in areas of missing information identified within the Deposit in order to potentially expand the tonnage of the current inferred resource and, where possible, infill and upgrade inferred resources to the indicated category. The Program was also designed to, where possible, identify and test possible higher grade areas of the Deposit including a newly identified polymetallic zone located stratigraphically above the main mineralized zones.

The Program was based on down hole geophysics and the new geological model and utilized 3 drill pads (A, B and C) established in the 2017 drill program (Figure 1).

Volcanogenic massive sulphide (VMS) style zinc-copper mineralization was intersected in all diamond drills holes with the exception of hole BM18-001A which was abandoned at 61 metres due to excessive deviation (Table 1 and 2).

Four holes were drilled from Pad A and focused on the untested northern edge of the Deposit. All holes continued to demonstrate the zonation of elevated copper values in this area of the Deposit.

Six diamond drill holes were drilled from Pad B tested the central, lateral extent of the Deposit to the south as well as a newly identified polymetallic zone. This zone could not be included in the Technical Report's resource estimate because of the poorly understood continuity of mineralization.  All diamond drill holes intersected mineralization, usually in several zones and all continued to demonstrate the predictability and apparent continuity of the mineralizing system of the Deposit.

intercepted multiple high-grade intercepts of zinc and copper, including:

Pad C was set up to test the southern down dip portion of the Deposit and add definition between widely spaced previous drill holes. A total of eight diamond drill holes were completed from this pad.

As predicted in the geological model and confirmed by drilling, the continuity and high-grade nature of the mineralization continues to be demonstrated to depth.  Specifically, drilling confirmed that the mineralization encountered at 950 metres down dip in the 2017 drilling appears contiguous with the main Deposit.

Diamond drill holes, BM18-003, BM18-004 and BM18-005 were drilled to test the lateral extent of the Deposit to the south. While all holes intersected mineralization, results currently suggest the limit of the Deposit is defined in this area.

Mr. Kent Pearson, CEO stated, "We are excited about the results of this drill program, particularly the success in extending the Brabant-McKenzie deposit's mineralization to depth. Additionally, we continue to be encouraged by the overall continuity and confirmation of the deposit's high-grade nature. The results of this program provide important information to further our understanding of the deposit and indicate the presence of potential additional resources adjacent to those already known. Furthermore, additional diamond drill targets continue to be identified and show the deposit has further upside potential. The Company plans to provide an updated resource estimate for the Deposit using the results from the completed winter and proposed summer exploration programs as well as from further historical data compilation, geological modelling and interpretation."

The core was logged and split in a secured core logging facility. Individual samples were labelled, placed in plastic sample bags and sealed. Groups of samples were then placed in security sealed bags and shipped directly to the Saskatchewan Research Council Laboratories ("SRC") in Saskatoon, Saskatchewan for assay analysis. SRC used the ICP3 Base Metal Exploration Package for analysis. Check assays were undertaken by ALS Labs located in Vancouver B.C. Assay results for both methods were acceptable. SRC and ALS are independent of the Company. Both SRC and ALS are ISO17025 accredited.

The foregoing scientific and technical disclosures have been reviewed and approved by Kent Pearson, P. Geo., and Finley Bakker P. Geo., and are qualified persons as defined by National Instrument 43-101. Mr. Bakker is an independent consultant to Murchison Minerals Ltd. and the Brabant-McKenzie project. Mr. Pearson is President and Chief Executive Officer of Murchison Minerals Ltd.

The Brabant-McKenzie project is located 175 km Northeast of La Ronge, Saskatchewan and approximately 3 km from the community of Brabant Lake. The area is accessed year-round via Provincial Highway 102 and is serviced by grid power. The project consists of one mining lease which hosts the Deposit and an additional 15 mineral claims totaling 7,031 hectares which cover approximately 18 km of strike length over favourable geological horizons, multiple known mineralized showings and identified geophysical conductors.

Murchison Minerals Ltd. is a Canadian based exploration company focused on the exploration and development of the 100% owned Brabant-McKenzie zinc-copper project in North-Central Saskatchewan. The Company also has the HPM nickel/copper/cobalt project in Quebec and gold projects in the Pickle Lake area of northwestern Ontario.

Additional information about Murchison Minerals and its exploration projects can be found on the Company's website at www.murchisonminerals.com.