SOUTH GLENGARRY, ON, April 25, 2018 /CNW/ - On April 16th, 2018, members of the Cornwall Regional Task Force (CRTF) were conducting a Border Integrity operation targeting smuggling activity in, and around the St. Lawrence River corridor. In the early morning hours of April 17th, officers located a trio of vehicles travelling in a convoy leaving Hamilton Island, all vehicles were heavily loaded with bags containing unstamped, fine cut raw tobacco.  Further investigation led officers to believe that the contraband had been unloaded from a vessel onto a property on the island.  In total, six people - four males and two females - all from Cornwall, were arrested without incident for Possession of Unstamped Tobacco. 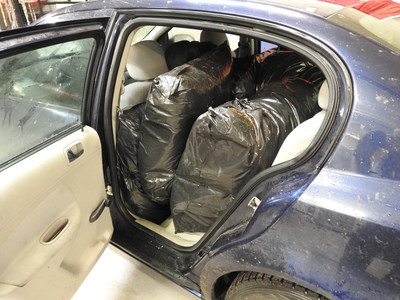 The following individuals were released and will appear in Cornwall Court on May 29th, 2018 to answer to charges of Possession of Unstamped Tobacco, contrary to the Excise Act (2001).

All three vehicles and 894.10 kilograms of tobacco were seized.

On April 18, 2018, CRTF Members on patrol in the east end of Cornwall, observed suspicious activities on the property of the Co-op Marina. Further investigation led the officers to discover that a vehicle, which had departed from the Marina, was loaded with unstamped fine cut tobacco.

Ernest Corbiere (42) of Snye, Quebec, was arrested without incident, and a Chevrolet Tahoe 2004 was seized along with 20 bags of unstamped fine cut tobacco weighing 357.44kg.  Corbiere was also found in possession of 10 pills, believed to be Oxycodone. He has been charged with:

"Border integrity is important for Canadians.  Shore line residents can be the first to witness any suspicious activity along the St Lawrence River where Organized Crime Groups are trying to find weak spots to exploit.  It's in everyone's best interest to report suspicious activities", stated Insp. Sue Black, Officer in charge of the RCMP Cornwall Detachment.

The CRTF is a joint forces partnership that includes the Royal Canadian Mounted Police, the Ontario Provincial Police, the Canada Border Services Agency and the Ontario Ministry of Finance.