TORONTO and NEW YORK, June 11, 2019 /CNW/ - Mountain Province Diamonds Inc. ("Mountain Province", the "Company") (TSX and NASDAQ: MPVD) announces the discovery of a new kimberlite at its Gahcho Kué Joint Venture (GKJV) leases. The Wilson kimberlite is located roughly 200 meters east of the Tuzo kimberlite and was discovered during drill testing of geophysical and geological anomalies in the area. 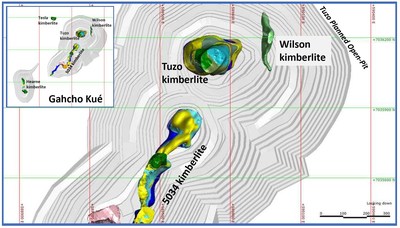 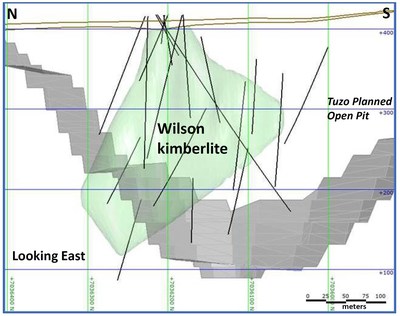 President and CEO of Mountain Province Stuart Brown commented: "This very positive development, the discovery of the Wilson kimberlite, is a result of the combined efforts between Mountain Province and De Beers Canada, who are operators of the Gahcho Kué JV. The discovery of Wilson demonstrates the high exploration potential of the Gahcho Kué JV area, and after a 20-year discovery hiatus, it confirms that we are on track for discovering new kimberlites in this region. This discovery also heightens our focus on the potential for more discoveries in the corridor between the Gahcho Kué JV and the Kelvin-Faraday kimberlites."

The location of the Wilson kimberlite relative to other kimberlites in the Gahcho Kué mine plan is provided in the image below. Detailed images and other data that follow are also available on the company website at www.mountainprovince.com.

The Wilson kimberlite was discovered during an exploration drilling program that was designed to conduct drill-testing of geophysical and historical drilling anomalies in the area surrounding the Gahcho Kué kimberlites. The discovery drillhole MPV-19-496C intersected tuffisitic kimberlite beneath 18 meters of lake water and bottom sediments to roughly 137 meters, and hypabyssal kimberlite from 152 to 207 meters. These divisions are preliminary; detailed logging of the core that is currently underway is expected to identify more complex internal lithologies. To date, eighteen drillholes have been completed and preliminary drilling results are summarized in the table below.

In contrast to the Curie kimberlite announced last year, which is believed to be connected to the nearby Dunn Sheet (see news release, July 12, 2018), drilling at Wilson shows no connection to nearby Tuzo, and as such the Wilson kimberlite is a distinct, new discovery. Three-dimensional modeling of the drill results suggests that Wilson is elongated north-south and has roughly vertical contacts with country rock along its length. A greater volume of kimberlite is present to the north, and the kimberlite also remains open to the north. A preliminary image of the Wilson kimberlite in cross-sectional view is provided in the image below.

After logging of the discovery drillhole at the mine site, representative samples of the core were shipped to the Geoanalytical Laboratories Diamond Services of the Saskatchewan Research Council ("SRC") for caustic fusion recovery of microdiamonds. A total of 115.2 kilograms of kimberlite was treated for microdiamonds, with 480 diamonds recovered in the +0.075mm size classes. Five +0.85mm diamonds included in the result weigh a total of 0.32 carats, with the largest stone being a 0.28 carat colorless octahedral aggregate. Results are summarized in the table below.

The microdiamond samples were sealed at the mine site with chain of custody protocols in place during their transit and receipt at the SRC. The SRC is accredited to the ISO/IEC 17025 standard by the Standards Council of Canada as a testing laboratory for diamond analysis using caustic fusion.

Vice President of Exploration Dr. Tom McCandless commented: "While the results are preliminary, both the microdiamond and 3D modeling data suggest that the Wilson kimberlite will add positively to the mine at Gahcho Kué. With this important discovery, what would have formerly been discarded as waste rock has, through methodical exploration, now been converted to rock of value as we move forward with development of the Tuzo open pit."

Additional sampling of core from Wilson for microdiamond and geological assessment is presently underway. Further drilling to delineate the northern extent of the Wilson kimberlite is also in the planning stage, with the interpretation of all new results expected later in 2019.

The winter 2019 exploration program at the Company's 100%-held Kennady North Project has also been completed. The objectives of the winter program were to remove heavy equipment from previous bulk sampling programs, and to drill-test exploration targets located three to four kilometers southwest of the Gahcho Kué Mine. The first objective was successfully completed, but drilling of priority targets was hindered by flight-restrictive weather for the helicopter-supported drill program. Only five drill holes totaling 917 meters of the 2,000 meter program were completed and no kimberlite was intersected. The untested targets will be reviewed for discovery potential and reprioritized along with other targets in the Kelvin-Faraday Corridor located northeast of Gahcho Kué.

Images from the winter 2019 exploration program at Kennady North are available on the company website at www.mountainprovince.com.

Mountain Province Diamonds is a 49% participant with De Beers Canada in the Gahcho Kué diamond mine located in Canada's Northwest Territories.  Gahcho Kué consists of a cluster of various diamondiferous kimberlites, four of which are being developed and mined under the current mine plan. The Company also controls 67,164 hectares of highly prospective mineral claims and leases immediately adjacent to the Gahcho Kué Mine that include an indicated mineral resource at the Kelvin kimberlite and inferred mineral resources for the Faraday kimberlites.

The disclosure of scientific and technical information in this news release regarding Mountain Province's mineral properties has been reviewed and approved by Dr. Tom E. McCandless, P.Geo., Vice President Exploration for Mountain Province and a Qualified Person as defined by National Instrument 43-101 Standards of Disclosure for Mineral Projects.

Factors that could cause actual results to vary materially from results anticipated by such forward-looking statements include variations in ore grade or recovery rates, changes in market conditions, changes in project parameters, mine sequencing; production rates; cash flow; risks relating to the availability and timeliness of permitting and governmental approvals; supply of, and demand for, diamonds; fluctuating commodity prices and currency exchange rates, the possibility of project cost overruns or unanticipated costs and expenses, labour disputes and other risks of the mining industry, failure of plant, equipment or processes to operate as anticipated.

These factors are discussed in greater detail in Mountain Province's most recent Annual Information Form and in the most recent MD&A filed on SEDAR, which also provide additional general assumptions in connection with these statements.  Mountain Province cautions that the foregoing list of important factors is not exhaustive.  Investors and others who base themselves on forward-looking statements should carefully consider the above factors as well as the uncertainties they represent and the risk they entail.  Mountain Province believes that the expectations reflected in those forward-looking statements are reasonable, but no assurance can be given that these expectations will prove to be correct and such forward-looking statements included in this news release should not be unduly relied upon.  These statements speak only as of the date of this news release.

Mountain Province Diamonds is a 49% participant with De Beers Canada in the Gahcho Kué diamond mine located in Canada's Northwest Territories. Gahcho Kué is the world's largest new diamond mine, consisting of a cluster of various diamondiferous kimberlites, four of which...