LONDON, July 31, 2019 /CNW/ - Meridian Mining SE (TSXV: MNO) ("Meridian" or the "Company") today is pleased to announce that it has consolidated its land position in its new Mirante da Serra project area ("the Project"), with four new exploration licence applications lodged ("the Applications"), covering the northern extensions of the basin succession hosting the Project's prospective manganese oxide mineralization (see Figure 1). The Application areas were identified as being similarly prospective as a result of the due diligence conducted on the original Mirante da Serra JV area1. 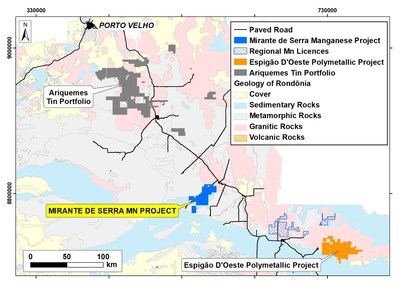 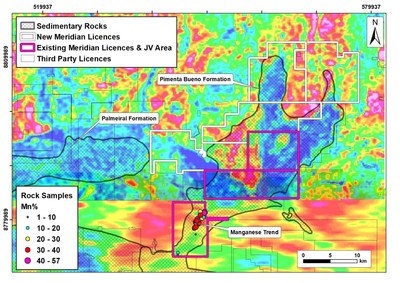 Key highlights of the completion of the Mirante da Serra land consolidation program are:

Last week, the Company announced that it had entered a joint venture on the Mirante da Serra Project Area1, targeting an area of sediment-hosted manganese oxide mineralization. In addition to the new JV licence area, Meridian also held two 100%-owned exploration licences along the NW projection of the basin trend, totalling 15,414 Ha. Four additional exploration licence applications have now been registered with the Agência Nacional de Mineração, totalling 39,602 Ha, taking Meridian's direct licence holdings in the Project area to 55,016 Ha. The Company focused on the northern area due to the increasing abundance of Mn trending north in the JV area (in areas of open access, away from influence of reserves in forested areas of the basin located further to the south / south-west of the project area).

Mr Clark, Interim CEO & President, states, "As Meridian is an experienced manganese explorer and producer in Rondônia, it has been able to apply its in-house expertise to the Project area. The prospectivity of the Application areas was quietly identified and the four Applications were lodged. The opportunity to secure the northerly extensions of the Mirante da Serra JV's prospective sedimentary units within the same host basin to the north is an important development for our Rondônia manganese business. The Company very much views the Mirante da Serra JV area as the short to medium-term growth opportunity of its current manganese business, while the Applications have secured the potential for long-term upside."

The Applications follow a review of data of the federal geological services agency, Companhia de Pesquisa de Recursos Minerais ("CPRM"). The new areas cover the mapped extensions of the sedimentary basin as shown in the regional geology, and extensions inferred in the geophysical data in areas of more recessive weathering. In the regional radiometric data, the overall basin succession is marked by a low Total Count response (compared to adjacent granites of the crystalline basement) (Figure 2). The geology and geophysics show two lobes of the basin extending to the north, and a separate trend branching to the north-west.

Initial evaluation upon approval of the new licences will be focussed on:

The technical information about the company's exploration activity and exploration target range has been reviewed and approved under the supervision of Dr. Adrian McArthur (Bachelor of Science (honours), doctor of philosophy and FAusIMM), the chief geologist of Meridian Mining, who is a qualified person within the meaning of National Instrument 43-101.

On behalf of the Board of Directors of Meridian Mining SE

Meridian Mining SE is focused on the acquisition, exploration, development and mining activities in Brazil. The Company is currently focused on exploring and developing the Espigão manganese and polymetallic projects, the Mirante da Serra manganese project, the Bom Futuro tin JV area, and adjacent areas in the state of Rondônia. Meridian is currently producing high grade manganese at its project located at Espigão do Oeste.

Further information can be found at www.meridianmining.co.

Some statements in this presentation contain forward-looking information or forward-looking statements for the purposes of applicable securities laws. These statements include, among others, statements with respect to the Company's plans for exploration, development and exploitation of its properties and potential mineralisation. These statements address future events and conditions and, as such, involve known and unknown risks, uncertainties and other factors, which may cause the actual results, performance or achievements to be materially different from any future results, performance or achievements expressed or implied by the statements. Such risk factors include, among others, failure to obtain regulatory approvals, failure to complete anticipated transactions, the timing and success of future exploration and development activities, exploration and development risks, title matters, inability to obtain any required third party consents, operating risks and hazards, metal prices, political and economic factors, competitive factors, general economic conditions, relationships with strategic partners, governmental regulation and supervision, seasonality, technological change, industry practices and one-time events.  In making the forward-looking statements, the Company has applied several material assumptions including, but not limited to, the assumptions that: (1) the proposed exploration, development and exploitation of mineral projects will proceed as planned; (2) market fundamentals will result in sustained metals and minerals prices and (3) any additional financing needed will be available on reasonable terms. The Company expressly disclaims any intention or obligation to update or revise any forward-looking statements whether as a result of new information, future events or otherwise except as otherwise required by applicable securities legislation.

The Company cautions that it has not completed any feasibility studies on any of its mineral properties, and no mineral reserve estimate or mineral resource estimate has been established. In particular, because the Company's production decision relating to Meridian Mineracao Jaburi S.A, manganese project is not based upon a feasibility study of mineral reserves, the economic and technical viability of the Espigão manganese project has not been established