LONDON, July 24, 2019 /CNW/ - Meridian Mining SE (TSXV: MNO) ("Meridian" or the "Company") today announces that it has signed an agreement to acquire a 100% interest in the Mirante da Serra manganese project ("the Project"), in the state of Rondônia, Brazil (Fig. 1). Following a sequential process related to project and administrative milestone achievements, Meridian at its election, will acquire the Project for a cumulative consideration of BRL 1.14 M (~USD 300,000). This acquisition follows an extensive due diligence program, including mapping, sampling and granulometry studies. The payment terms have been linked to Project development milestones to decrease risk for the Company. 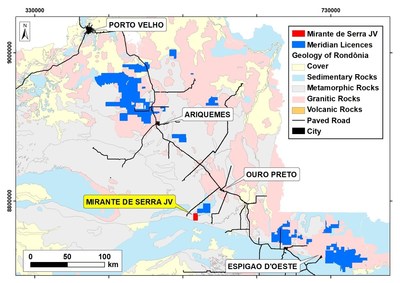 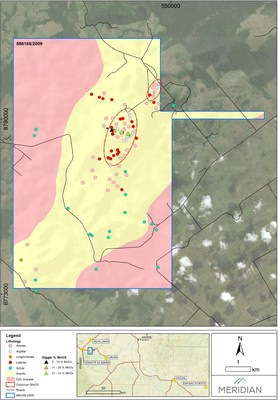 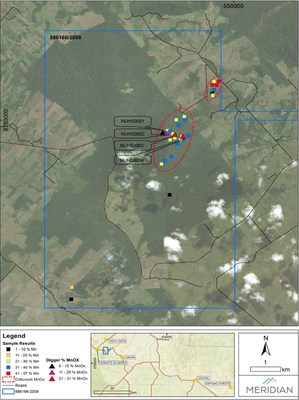 Mr Clark, Interim CEO & President, states, "This is a strong advance for the Company as it continues to develop its core business skills via prudent mining investment parameters. Our strategy at Mirante da Serra is to test the development potential of the extensive sediment-hosted manganese oxide occurrences, with the objective of defining a resource capable of providing a stable supply to an adjacent processing facility. The manganese grades (non-laterite) of between 21.9% and 50.9% Mn observed in the Company's due diligence sampling program are very interesting. Depending on the results of planned exploration and processing studies, it opens up the possibility of producing a DSO product as per other comparable international basin-hosted manganese oxide occurrences. The Company has also been granted two additional exploration licenses totalling 15,414 Ha along trend to Mirante da Serra prospective ground for the potential exploration upside, securing a strong land position."

Geology and Mineralization ModelThe host rocks in the area, are mapped as Siluro-Devonian sediments (Fig. 2), in lobe of the Pimenta Bueno Graben extending NW over the Proterozoic crystalline basement (the age constraints on the sedimentary package are poor, and similar rocks to the west are represented as Proterozoic in age). The manganese oxide is considered to be sedimentary in origin, and to have been modified by structural and metamorphic enrichment. Follow up studies will clarify the genetic model, however the chemistry of the manganese (higher phosphorous, low base metals) supports a sedimentary origin. The manganese oxides in places appear to form structurally controlled veins locally, and at more regional scales in other occurrences in the basin succession (Fig. 3). However, is also seen to be disseminated through the sandstones and grits. Colluvial concentrations are present, similar to those seen at Espigão do Oeste. Mixed cemented laterite-manganese oxide horizons are also present as a surficial capping and are believed to be derived from a primary basement source (the laterites would be difficult to upgrade, but the colluvium and underlying primary manganese mineralization would be targeted for development).

The manganese content progressively increases from upwards from ~20% Mn as it becomes more concentrated in the host sediments, with the semi-massive samples reaching grades of ~50% Mn (sample OPRK0004). Levels of iron, silica and aluminium decrease with increasing manganese grade. The higher-grade manganese oxides have lower base metal contents and higher phosphorous contents than the Company's current concentrates. The Company has reviewed the analytical data in relation to manganese markets and believes that the high-grade product would be sought-after for fertiliser and welding applications. The Fe-Mn laterite is a local surficial horizon and is not a principal target for evaluation.

Historical pitting, trenching and mapping defined manganese mineralization distributed over a strike length of 3km in a NE-trend, with a maximum cross-strike footprint of 1km. As part of the due diligence process, the Company conducted its own program of mapping and rock chip sampling, and extended mineralization footprint south-eastwards by a further kilometre (where it remains open). The Company also completed a transect of auger drilling to test the colluvial zone and corroborate the historical sampling, with samples processed for granulometric tests through its laboratory in Espigão (Fig. 3). The better concentrations of manganese oxides appear to be distributed over an area of ~125 Ha. Additional pitting trenching and drilling is required to confirm continuity and grade characteristics, with the basement in many areas is obscured by soil and/or manganiferous laterite capping.

The United States Geological Service deposit models1 for sedimentary manganese deposits note that 10th, 50th, and 90th percentiles of tonnage for such deposits are 280, 7.3, and 0.19 million tonnes respectively, with deposits typically less than 10 m thick and large deposits potentially covering more than 10 km2. Grade ranges for sedimentary resources typically range from ~15-40% Mn. Those amenable to development are upgraded for final sale by dense media separation techniques (jigs, spirals), for sale in the 30-40%+ Mn range.

During the Company's due diligence of the Project, a limited auger campaign encountered a mineralized colluvial horizon with a thickness ranging from 0.55m to 1.65m. Granulometric tests indicated by mass the manganese oxide content above 4 mesh (4.76mm) was 9 % to 30%. Considering a range of parameters for the colluvial horizon (and excluding the primary mineralization which requires further analysis) and based on the Company's experience of measuring and processing Mn colluvial occurrences at its Espigão project, the Company considers a preliminary exploration target covering a 125 Ha area to be in the following ranges to be (Table 2):

The potential quantity and grade of manganese oxide mineralization are conceptual in nature. There has been insufficient exploration to define a mineral resource and it is uncertain if a mineral resource estimate will be delineated. The Company plans to commence a systematic infill program to further define the colluvial mineralization, expand the beneficiation test-work, and commence testing also of the shallow saprolite-hosted sedimentary mineralization.

Rock samples of the OPRK-series were analysed by Bureau Veritas, Perth, Australia, by lithium borate fusion - XRF analysis for major oxides, robotic Thermogravimetric analysis (TGA) for loss-on-ignition, and Fused bead for Laser Ablation MS for minor elements (As, Cd, Cr, Pb). Samples of the RGJO-series were analysed by SGS, Belo-Horizonte, Brazil, by lithium borate fusion - XRF analysis for major oxides, and a multi-element ICP-OES package for minor elements. Pulps from an additional 28 rock-chip samples were analysed by portable XRF analysis in the Company's on-site laboratory at Espigão do Oeste (The portable XRF instrument is calibrated using certified reference materials, and results are routinely compared against external laboratory-certified production samples).

The technical information about the Company's exploration activity and exploration target range has been reviewed and approved under the supervision of Dr. Adrian McArthur (B.Sc. Hons, PhD. FAusIMM), the Chief Geologist of Meridian Mining, who is a "qualified person" within the meaning of National Instrument 43-101.

On behalf of the Board of Directors of Meridian Mining SE

Meridian Mining SE is focused on the acquisition, exploration, development and mining activities in Brazil. The Company is currently focused on exploring and developing the Espigão manganese and polymetallic projects, the Mirante da Serra manganese project, the Bom Futuro tin JV area, and adjacent areas in the state of Rondônia. Meridian is currently producing high grade manganese at its project located at Espigão do Oeste.

Further information can be found at www.meridianmining.co.

Some statements in this presentation contain forward-looking information or forward-looking statements for the purposes of applicable securities laws.  These statements include, among others, statements with respect to the Company's plans for exploration, development and exploitation of its properties and potential mineralisation.  These statements address future events and conditions and, as such, involve known and unknown risks, uncertainties and other factors, which may cause the actual results, performance or achievements to be materially different from any future results, performance or achievements expressed or implied by the statements. Such risk factors include, among others, failure to obtain regulatory approvals, failure to complete anticipated transactions, the timing and success of future exploration and development activities, exploration and development risks, title matters, inability to obtain any required third party consents, operating risks and hazards, metal prices, political and economic factors, competitive factors, general economic conditions, relationships with strategic partners, governmental regulation and supervision, seasonality, technological change, industry practices and one-time events.  In making the forward-looking statements, the Company has applied several material assumptions including, but not limited to, the assumptions that: (1) the proposed exploration, development and exploitation of mineral projects will proceed as planned; (2) market fundamentals will result in sustained metals and minerals prices and (3) any additional financing needed will be available on reasonable terms.  The Company expressly disclaims any intention or obligation to update or revise any forward-looking statements whether as a result of new information, future events or otherwise except as otherwise required by applicable securities legislation.

The Company cautions that it has not completed any feasibility studies on any of its mineral properties, and no mineral reserve estimate or mineral resource estimate has been established.  In particular, because the Company's production decision relating to Meridian Mineracao Jaburi S.A, manganese project is not based upon a feasibility study of mineral reserves, the economic and technical viability of the Espigão manganese project has not been established