HYDERABAD, India, Aug. 12, 2019 /CNW/ -- Megha Engineering and Infrastructures Limited (MEIL) has unveiled yet another pivotal moment in the Kaleshwaram Lift Irrigation Project (KLIP). MEIL successfully commenced operations in the world's largest Laximpur underground pumping station (LUPS - The Package 8). The pump house named after the goddess Gayatri, successfully completed the wet run on Sunday night, 11th August. The wet run began with switching on the 5th machine in LUPS. With this, around 3000 cusecs of water rose to the top of 111 meters and flew into Mid-Manair through the gravity canal. The gush of water from the underground impressed the onlookers. The Chief Minister of Telangana Mr. K. Chandrashekar Rao is expected to inaugurate this colossal pump house on Wednesday. 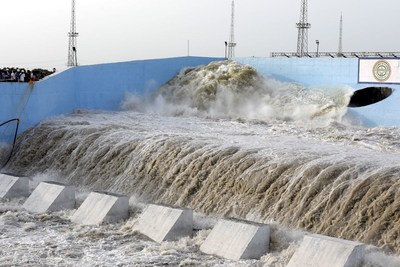 The longstanding dream of Telangana, a dryland area in South India is now turning out to be a reality with this project. The LUPS would enable live storage of water in reservoirs throughout the year in the Godavari River Belt. This colossal pump house, considered as the heart of KLIP, is an outstanding engineering marvel as it is the world's largest underground pumping station constructed 470 feet below the earth's surface. This unique pump house would enable reverse pumping of Godavari water into the same river, thus rejuvenating the hitherto dry areas en route.

Describing the Laxmipur Underground Pumping Station, Mr. B. Srinivas Reddy, Director, MEIL, said, "This is an extraordinary underground pumphouse, 470 feet below the ground with twin tunnels and the largest surge pools in the world. This is an ultra-mega project in the world, having 7 motors, each having a capacity of 139 megawatts. These motors can lift 3 TMC of water per day. This is the true example of 'Make in India' as these gigantic Motors are developed in the country with the computational fluid dynamics (CFD) technology. The most significant feature of KLIP is that it completed the construction of electrical infrastructure with 3057 MWs capacity that comprises six 400KV and 220KV substations, transformers and 260 kilometres of transmission lines, 7 kilometres of 400 KV XLPE under ground cable. In any parameters, this project is the world's most innovative mega project. And the credit goes to MEIL for accomplishing this gigantic task."

The structure and size of this underground work is simply mind-boggling. Going around the pumphouse will remind one of visiting a huge underground shopping mall with multiple floors. Generally, pump houses for lift irrigation projects are built at ground level near river banks to pump water to a higher elevation. However, this unique super structure, the first-of-its-kind in the world, is built at a location below the ground with a pumping capacity of 2 TMCs of water per day.

Nowhere in the world, does such a huge cavern exist with a size of 140 meters depth, 25 meters width and 65 meters in height. PumpHouse Service Bay is located at 221 meters below the ground, while the pump bay is at 190.5 meters, transformer bay at 215 meters, the control room at 209 meters beneath the earth's surface respectively. The pumphouse consists of unique twin tunnels, built side by side. The length of each tunnel is 4,133 meters and the diameter is 10 meters. As each motor requires 139 MW of power to run, a 160 KVA capacity pump transformer along with compressor units have been set up successfully.

The most amazing part of this underground construction is the surge pools in the pump house. To ensure uninterrupted pumping, three surge pools have been built to store enough water. Erection of turbine pumps at a depth of 138 meters underground is another unique feature of the project. Each motor pump weighs around 2,376 metric tonnes and one can imagine the massive size of each pump unit. For this reason, these motors are called as 'Giant motors'.

Megha Engineering Infrastructure Limited (MEIL) with 30 years of its rich technical expertise in such complex and high-end electro-mechanical works has been executing this project as a mission with an objective to deliver water to the farmlands in time and quench the thirst of Telangana.

"We feel honoured to be a part of Telangana's dream project and the world's biggest lift irrigation project, the KLIP. It has been a privilege and a lifetime opportunity to execute with world-class technology by coordinating with the world's best engineering suppliers and realising the water dreams of Telangana. The Chief minister Mr. K Chandrashekhar Rao's determination, continuous supervision, consultations and his encouragement to project site engineers enabled us to complete the project in time," said B. Srinivas Reddy, Director, MEIL.