TORONTO, May 28, 2018 /CNW/ - When non-profit developer Options for Homes launches its latest development The Humber this summer, it will bring something new to the market: a "Smoke Less" condo building that will restrict the consumption of tobacco and cannabis to vapourizers.

The move is part of Options' commitment to creating a predominantly family friendly condo, which is reflected in the condo's suite mix, two-thirds of which are 2- and 3-bedroom suites suitable for families. 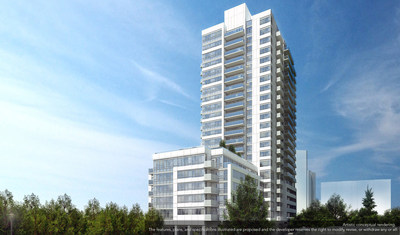 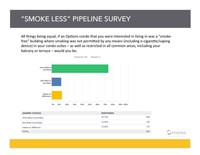 The Humber's comprehensive and thoughtful "Smoke Less" takes into account both the desire by many families to live in smoke-free buildings while also respecting homeowners' lifestyle choices to consume nicotine and cannabis products. It also addresses the forthcoming legalization of cannabis in Canada this year.

"We know from surveying our potential purchasers that there's deep interest in smoke-free buildings. We think this idea of 'Smoke Less' speaks to people's concern about the impact of smoking while respecting individual choice and understanding that we're on the cusp of a major cultural shift when it comes to cannabis," says Options' CEO Heather Tremain. "We feel that restricting smoking while permitting vaping strikes the right balance between the best interest of many and the personal rights of the few."

This progressive approach will address issues common to multi-unit dwellings, such as smoke transfer between units, issues of balcony fires, and the unfortunate reality of cigarette trash, which is often found on lower balconies due to people throwing them from above.

Research suggests (see above) that favouring vapourizing versus smoking is an effective harm-reduction strategy, as well as one that virtually eliminates the problem of smoke pollution and smoke transfer between suites in multi-unit residences.

The "Smoke Less" policy at The Humber will still restrict smoking and vaping in any common areas of condos, including elevators, stairwells, hallways, parking garages, laundry facilities, lobbies, outdoor spaces and entertainment rooms. It will also restrict growing cannabis on balconies or in homes.

ABOUT THE HUMBERThe Humber is Options for Homes' 13th development in the GTA. Situated on the banks of the Humber River at Lawrence and Weston, this condo development offers uninterrupted southwest views of the river and is located steps away from the new Weston UP Express station with service to Union in 15 minutes. The Humber is a 232-suite, 22-storey condo in Weston that includes 5 townhome-style suites and will be built by Deltera.

ABOUT OPTIONS FOR HOMESOptions for Homes, a social enterprise, is Canada's largest developer of affordable home ownership. We primarily help people with household incomes from $40K to $90K bracket – people who can generally afford the carrying costs of homeownership but don't have the resources to save for a large down payment – by offering a 10% to 15% Down Payment Loan. In 1994, Options developed the first of three condominiums in what is now known as The Distillery District. Since, we have completed 10 communities across the GTA with three more, representing 640 units, currently in construction.

We also consulted studies on the health implications of e-cigarettes as compared to regular cigarettes to determine whether such a policy would reduce the overall impact of smoking. Public Health Consequences of E-Cigarettes, a January 2018 study from National Academies of Sciences, Engineering, and Medicine, stated that 'There is conclusive evidence that completely substituting e-cigarettes for combustible tobacco cigarettes reduces users' exposure to numerous toxicants and carcinogens present in combustible tobacco cigarettes.'