Toronto Arts Foundation raises over one million dollars for Arts in the Parks with a night of dance, visual art and music 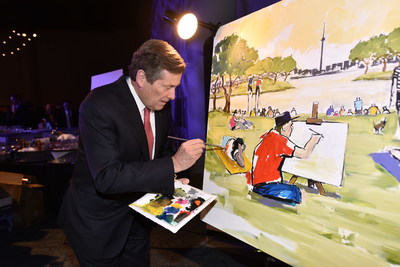 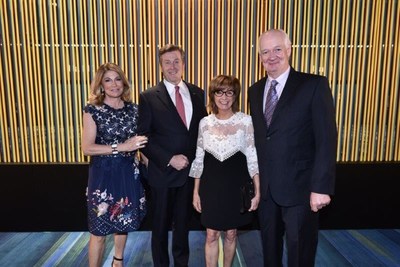 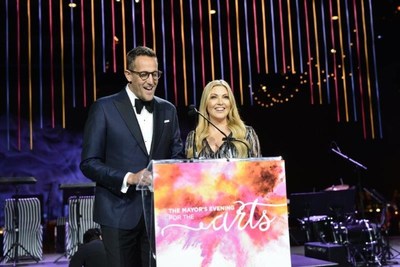 The annual event featured memorable performances from a variety of artists, including the St. Michael's Choir School singing the national anthem, and members of the New Canadian Global Orchestra performing mid-evening. It also included a special interactive light performance of a poem written by Toronto Poet Laureate Anne Michaels, and a surprise appearance by Rob Fowler and Sharon Sexton who performed a song from the touring production Bat Out of Hell. Opera singer Neema Bickersteth, beat boxer Joey Manay and rapper Säyeskye closed out the evening with a cover of Louis Armstrong's "What a Wonderful World."

"The Mayor's Evening for the Arts is one of my favourite events of the year, as it's an opportunity to shine the spotlight on Toronto's vibrant arts community," said Mayor John Tory. "Arts in the Parks is an incredible program that makes it possible for Torontonians to enjoy exceptional arts programming against the backdrop of our city's beloved green spaces. Knowing the importance of access to the arts, I'm proud of the work Toronto Arts Foundation is doing to deliver the arts to communities across our great city."

The event was attended by some of the city's brightest stars, including Colin Mochrie, Peggy Baker, Patricia O'Callaghan and Kent Monkman, and was emceed by Cheryl Hickey of Entertainment Tonight Canada and Noah Cappe of The Bachelorette Canada. Former CFL quarterback Damon Allen was also on hand with the Grey Cup for a unique photo opportunity ahead of next week's game, generously supported by sponsor Shaw Media.

A highlight of the evening was a speech by 14-year-old Jacky Chan, an enthusiastic supporter of Arts in the Parks. Jacky has been participating in the program's events for the past two summers, and spoke fondly of the opportunity to engage with the arts in his community through the program. Near the end of summer 2017, Jacky was able to contribute to a performance by building puppets and playing an instrument, and he's looking forward to being a part of performances for many summers to come.

"The Mayor's Evening for the Arts is a major highlight for our organization, as it brings together so many of our key supporters in celebration of the arts," said Claire Hopkinson, Director and CEO of Toronto Arts Council and Toronto Arts Foundation. "Arts in the Parks presents a unique opportunity for Torontonians to connect with their neighbours, using a language we can all understand: art. We're so grateful for the support from leaders in government, business, arts and creative industries, and particularly from Mayor Tory, who is a great champion of the arts in Toronto."

The funds raised tonight will support programming offered in summer 2018, which will be the third summer of Arts in the Parks. To learn more about Toronto Arts Foundation or Arts in the Parks, visit TorontoArtsFoundation.org or ArtsInTheParksTO.org.

About Toronto Arts FoundationToronto Arts Foundation is a charitable organization that encourages artistic excellence and increased access to the arts throughout the city. Their vision for the city is to connect every Toronto neighborhood with the transformative social and economic benefits of the arts.