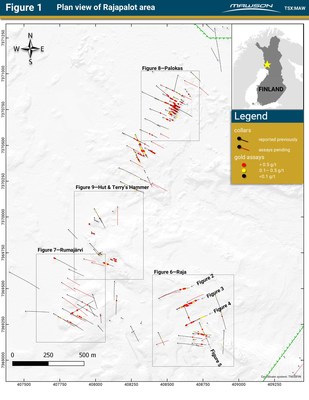 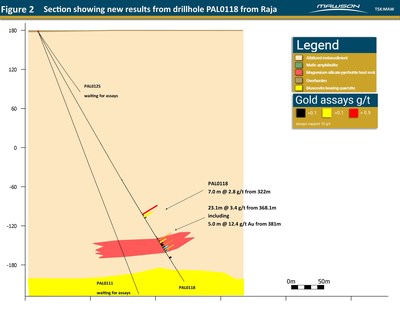 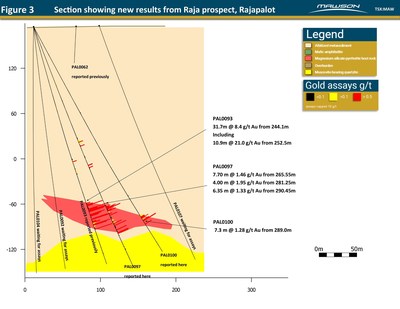 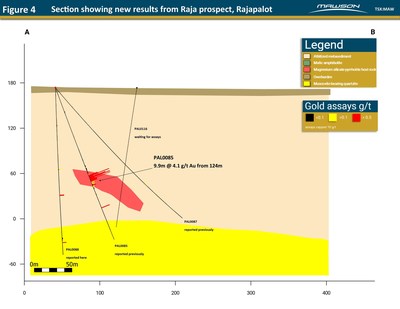 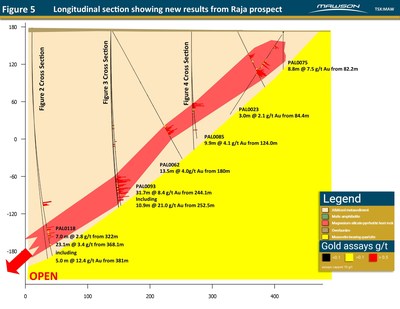 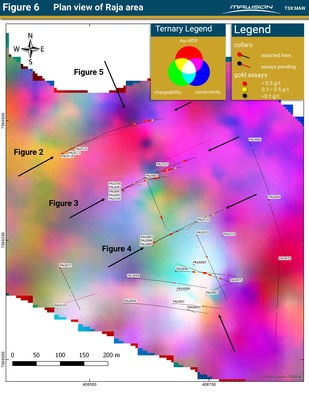 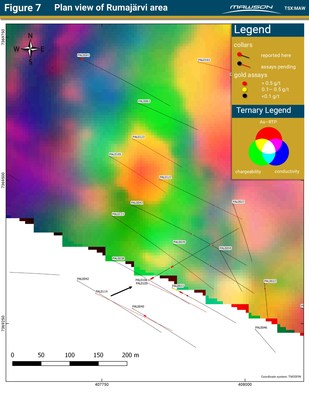 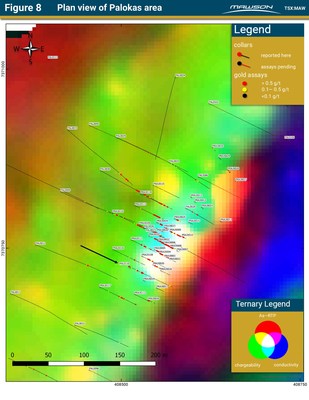 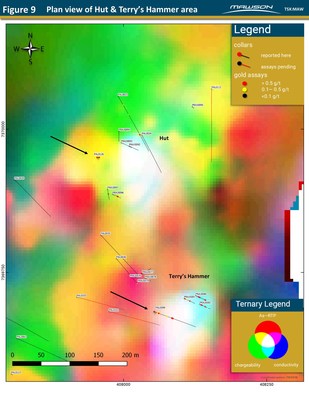 Mr. Hudson, Chairman and CEO, states, "Mawson's dual aims for this winter's drill program were to systematically grid drill and extend known gold prospects, while also testing a dozen new semi-regional structural-stratigraphic targets. Although still less than a quarter of drill core from the winter program has been assayed, the first part of this strategy is clearly delivering at Raja, with further high-grade mineralization discovered including 5.0 metres @ 12.4 g/t gold in PAL0118 lying 140 metres down-plunge from 10.9 metres at 21.0 g/t gold in PAL0093."

"In addition, we have drill discovered significant gold mineralization at five other prospects that were defined within Mawson's extensive geophysical, geochemical and geological datasets across the 12 square kilometre Rajapalot project. We are excited to have increased the mineralized footprints of each of these prospects, while receiving validation of the targeting methods developed by our technical team in the search for gold under thin glacial cover."

A plan view of the drill results and named prospects is provided in Figure 1. Cross and longitudinal sectional views and prospect plan views are included in Figures 2–9. Tables 1–3 include all relevant collar and assay information. Assuming a predominant stratabound control, the true thickness of the mineralized interval is interpreted to be approximately 90% of the sampled thickness. Intersections are reported with a lower cut of 0.5 g/t gold over 2 metre lower cut, no upper cut-off was applied.

Drilling of known prospects has been successful in delineating further extensions to known gold areas, in particular at the Raja prospect where over 470 metres of down plunge gold mineralization has been tested. Mineralization is unconstrained down-plunge and partly across strike. The gold mineralization contains sufficient associated sulphide to form an electrical conductor, and examination of VTEM geophysical data indicates a down-plunge extent from surface of over 900 metres. The structurally-controlled mineralized footprint trends approximately 340 degrees and is oblique to the surface orientation of the host strata. Highlights include:

Drilling at Rumajärvi prospect (Figure 7; PAL0109) intersected 7.4 metres at 2.4 g/t gold from 15.6 metres to the north of PAL0037 which intersected 56m @ 0.53 g/t gold with no lower cut, see Mawson News Release March 06, 2017. A new interpretation of VTEM line data indicates undrilled conductive targets over 100 metres deep to the east of current drilling, apparently along strike from the Terry's Hammer intersection above. Further geophysical modelling of geophysical data is required to define the shape and size of this target.

At Palokas (Figure 8), drill hole PAL0110 intersected 4.7 metres at 2.5 g/t gold from 37.6 metres. This hole was drilled at the southern margin of the Palokas prospect and extends mineralization 30 metres further south towards South Palokas.

Drilling at Terry's Hammer (Figure 9) intersected 4.7 metres at 2.1 g/t gold from 65.7 metres in PAL0099, the first large diameter drill test of a combined remanent magnetic/chargeable/conductive anomaly comprising gold-bearing sulphidic rocks in outcrop. This hole opens up the potential of a new area between South Palokas and Rumajärvi.

A similar remanent magnetic/chargeable/conductive anomaly was targeted (PAL0126) at The Hut (Figure 9), and the first hole into this target intersected gold-bearing sulphides (0.8 metres at 0.6 g/t gold) before the hole was abandoned at 8.9 metres. This drill hole was the first large diameter drill test of a combined remanent magnetic/chargeable/conductive anomaly at the Hut prospect. The hole was stopped at 8.9 metres when drilling ceased at Rajapalot (see Mawson News Release March 23, 2018). Nevertheless, the hole intersected pyrite- and pyrrhotite-bearing mineralized rocks below a thin cover of glacial till.

Structural interpretation of new drill core indicates a previously unrecognized early folding event causing regional inversion of the stratigraphy during F1 isoclinal folding. This effectively doubles the available volume of reactive rocks to the hydrothermal gold mineralizing event. The recognition of this early F1 folding event combined with our geophysics data has been instrumental in creating targets along strike to the east and of the Raja prospect and to the northeast of Palokas. Drilling continues at these targets.

Much of the mineralization at Rajapalot consists of sulphide (pyrrhotite>>pyrite), magnetite, biotite, muscovite and chlorite hydrothermal mineral assemblages hosted in predominately grey albitites and muscovite-biotite schists. Iron-and magnesium-rich hydrothermally altered sulphidic rocks are abundant at Palokas, and form local pods or structurally controlled void infills at other prospects. Textures range from veined albitic granofels through fractured and brecciated to locally schistose. Veining and fracture fill minerals include pyrrhotite, magnetite and magnetite-pyrrhotite (+/- quartz). Local retrograde chlorite after biotite and vein-controlled chlorite+/- tourmaline and magnetite are also present. Preliminary hand-held XRF analysis confirms the presence of associated scheelite and molybdenite, the former visible under UV light as tiny veinlets and disseminations. The iron-rich nature of the mineralized rocks is a common theme in either the oxide or sulphide form, with a variably sulphidic and chloritic overprint. The alteration is clearly post-metamorphic, reduced, and most likely driven by granitoid intrusions. Chlorite is regarded as the lowest temperature silicate mineral with gold, structurally controlled in apparent spatial association with quartz and/or K-feldspar veins. Altered rocks enclosing the mineralized package contain locally abundant talc and tourmaline.

Of the 59 holes drilled during the winter program for a total of 13,079 to date, a total of 44 diamond drill holes for 9,838 metres were completed within the Kairamaat 2/3 exploration permit this winter. The Kairamaat 2/3 permit is currently granted but not in legal force while appeals are being heard and therefore drilling ceased this winter three weeks earlier than planned on March 23. The Company is again working with all relevant authorities to be back drilling in Kairamaat 2/3 next winter (late 2018).  Three drill rigs continue drilling today at the adjacent Hirvimaa and Raja exploration permit areas and drilling will restart during the 2018 summer at Hirvimaa, Mannisto and Raja exploration permit areas.

Five diamond drill rigs from the Arctic Drilling Company OY ("ADC"), Oy Kati Ab ("Kati") and MK Core Drilling OY ("MK"), all with water recirculation and drill cuttings collection systems were used for the drill program. Core diameter is NQ2 (50.7 mm) or WL76 (57.5mm) diameter core. Core recoveries were excellent and average close to 100% in fresh rock. After photographing and logging in Mawson's Rovaniemi facilities, core intervals averaging 1 metre for mineralized samples and 2 metres for barren samples were cut in half at the Geological Survey of Finland (GTK) core facilities in Rovaniemi, Finland. The remaining half core is retained for verification and reference purposes. Analytical samples were transported by Mawson personnel or commercial transport from site to the CRS Minlab Oy facility in Kempele, Finland. Samples were prepared and analyzed for gold at Kempele using the PAL1000 technique which involves grinding the sample in steel pots with abrasive media in the presence of cyanide, followed by measuring the gold in solution with flame AAS equipment. The QA/QC program of Mawson consists of the systematic insertion of certified standards of known gold content, duplicate samples by quartering the core, and blanks the within interpreted mineralized rock. In addition, CRS inserts blanks and standards into the analytical process.

The qualified person for Mawson's Finnish projects, Dr. Nick Cook, President for Mawson and a Fellow of the Australasian Institute of Mining Metallurgy has reviewed and verified the contents of this release.

Intersections are reported with a lower cut of 0.5g/t gold over 2 metre lower cut, except where indicated by **. No upper cut-off was applied.