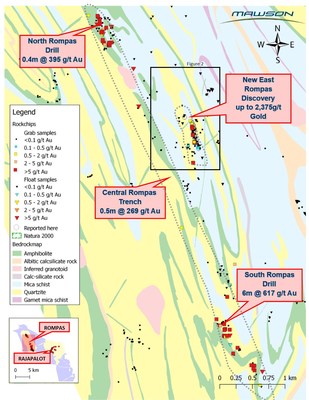 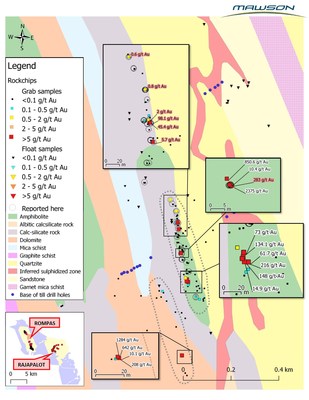 Mr Hudson, Chairman & CEO states, "East Rompas is an exciting new discovery by the Mawson team, with the strike length of the two semi-parallel mineralized zones now exceeding 700 metres. These new results increase the continuity of the zones and also include the identification of a new low sulphide, high gold-tellurium-bismuth association. Drilling to test the East Rompas mineralized trend is now back underway after a break for the holidays and we look forward to first results from this exciting new discovery."

Initial discovery results from East Rompas were published October 11, 2017 and follow-up results on October 23, 2017. Geological mapping, sampling, geophysics and drill planning is now complete and diamond drilling, which commenced in mid-December 2017 is ongoing.

East Rompas is located approximately 500 metres east of the 6 kilometre long Rompas high-grade vein system where drill results include 6 metres @ 617 g/t in drill hole ROM0011 (Figure 1). Gold mineralization discovered in outcrop is fracture controlled and associated with strongly biotite-altered mafic rocks, believed hydrothermal in origin, and similar to undrilled prospects at the Rajapalot area to the east. Gold mineralization has been discovered sporadically in two semi-parallel trends, perhaps as part of an en echelon array within a 700-metre-long NNW-SSE oriented zone, where the width of the individual occurrences are at least 20 metres (Figure 2). Outcrop is poor and forms less than 5% of the area. The northern mineralized zone is better exposed than the southern zone.

Geologic mapping and sampling, combined with interpretation of the ground geophysics (VLF-R and 25 metres spaced ground magnetics) has allowed definition of sulphidic targets and a recognition that the likely near-surface strike extent of the mineralized zone is up to 1,200 metres long. Diamond drilling is focussing on disseminated and sulphidic strike extensive targets associated with the surface outcrops reported here. The biotite-rich altered rocks associated with much of the gold, are poorly exposed when alteration intensity increases requiring geophysical interpretation to infer their extent under the swampy and shallow till covered ground.

Bismuth, tellurium and gold are strongly correlated in a similar manner to the gold found in both the Rompas vein trend and the disseminated sulphidic mineralization at Rajapalot. Although pyrrhotite is commonly associated with gold in surface outcrops, the relationship is not linear – some low-sulphide, but biotite-rich samples contain gold. Further diamond drilling in the current program will help to delineate the extent of the gold-bearing biotite-rich zones. Bismuth contents range from 0.01 ppm (detection limit) to 106 ppm with a mean of 2.86 ppm, a median of 0.11 ppm from 78 samples; tellurium was above detection (0.05 ppm) in 65 samples with a maximum of 97.1 ppm, a mean of 3.92 ppm and a median of 0.11 ppm.

The area is fully permitted for diamond drilling and is located outside Natura 2000 areas, within the Männistö exploration permit (granted in 2017).

A hand-held minidrill and a diamond saw were used to sample outcrops where sampling with a geological hammer was not possible. Single drill samples and foliation-parallel composite samples were obtained using the minidrill which was drilled up to 20 cm into outcrop areas. Diamond saw channels were cut perpendicular to the foliation up to 10 cm deep, approximately 2-4 cm thick and of variable length. Analytical samples were transported by Mawson personnel or commercial transport from site to the CRS Minlab Oy facility in Kempele, Finland. Samples were prepared at Kempele and analyzed for gold at Raahe using the PAL1000 technique which involves grinding the sample in steel pots with abrasive media in the presence of cyanide, followed by measuring the gold in solution with flame AAS equipment. Multi-element assays were conducted by ALSglobal using the ME-MS61U method. The QA/QC program of Mawson consists of the systematic insertion of certified standards of known element content, and blanks the within interpreted mineralized rock. In addition, CRS and ALS insert blanks and standards into the analytical process.