LONGUEUIL, QC, June 4, 2018 /CNW Telbec/ - This spring, Quebec's 13,700 maple producers harvested 118 million pounds of maple syrup using 46.8 million taps, for an average yield of 2.52 pounds per tap, which is low in comparison to previous years. Most of this production (89%) is for bulk sale. The rest will be sold on the retail market. In the record year of 2017, Quebec maple producers supplied 152.2 million pounds of maple syrup. 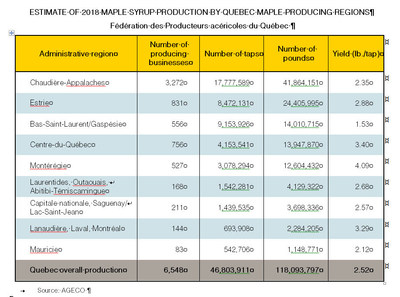 Wide production variations from one region to another in 2018 What marked the 2018 sugar season the most were productivity disparities from one region to another. In the western part of the province, Montérégie and Centre-du-Québec had a very good, if not excellent season. However in the east, maple producers in Bas-Saint-Laurent/Gaspésie struggled with below-average production levels. This was the result of a late spring, very cold weather, and abundant snow. The average production of 2.52 pounds per tap is considered low. Despite the 2.5 million taps added in Quebec in recent years, Québec produced 34 million fewer pounds than last year, an excellent qualified year.

About the Federation Founded in 1966, the Federation of Quebec Maple Syrup Producers seeks to promote the interests of local maple syrup producers and develop and exploit the full production and sales potential of Quebec maple products in accordance with sustainable development rules. It represents 13,700 maple producers whose quality of work allows Quebec to provide, on average, 72% of the world's maple syrup production.