EDMONTON, Nov. 7, 2017 /CNW/ - A new survey commissioned by the AMA Foundation for Traffic Safety reveals a concerning double standard when it comes to speeding, with many drivers not adhering to the very laws they claim to support. 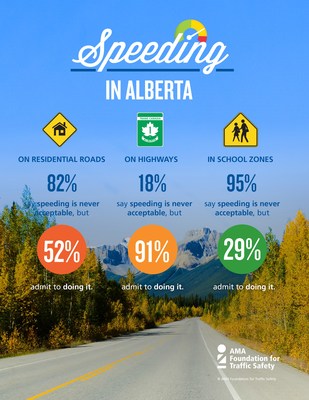 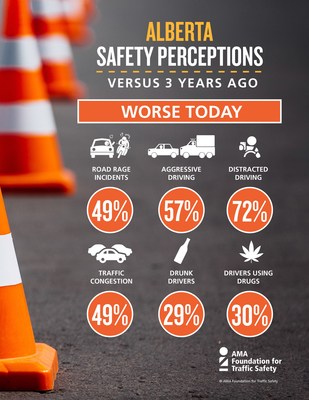 "There's a real disconnect between Albertans' concerns around traffic safety overall and their own admitted behaviours while behind the wheel," says Jeff Kasbrick, vice-president of government and stakeholder relations for the Alberta Motor Association. "With speeding, this study paints an unfortunate picture of, 'Do as I say, not as I do.' The first step in making our roads safer begins with our own actions."

"In one sense, this result can be taken as good news: the average Albertan doesn't believe they're at risk of impaired driving on Alberta roads," says Kasbrick. "However, we can't become complacent. Impaired driving, whether alcohol or drug-related, is a far too present reality on Alberta roads, and a very serious traffic safety issue."

The survey also found that, compared to three years ago, 49 per cent of Albertans believe road rage incidents are worse today; 57 per cent believe aggressive driving is worse; and 72 per cent believe distracted driving is worse. Few, however, see their own actions as a contributing factor: 65 per cent of Albertans rate themselves as more careful than other drivers, and 33 per cent rate themselves as similarly careful.

"People often think of driving as a mundane task when, in actual fact, it's probably the riskiest activity we do in a day," says Kasbrick. "We should always keep this front of mind when we're behind the wheel. We're all equal contributors to our driving community and by modelling good driving behaviour, we inspire others to do the same."