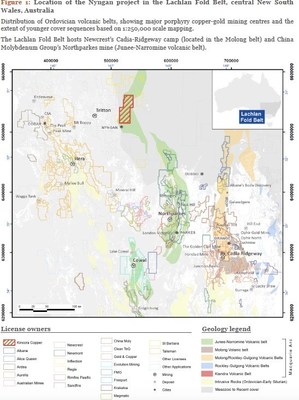 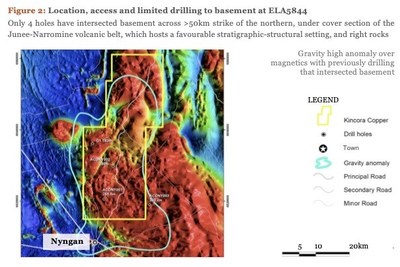 The issued direct license application area followed a review of prospective underexplored undercover terrains in Australia by Kincora's Technical Committee and various new project opportunities. The Kincora team has previous Tier 1 discovery successes in the LFB. The Nyngan project was selected based on its stratigraphic-structural setting and right rocks, with previous favourable results of the last drilling program by Newcrest Mining Limited inadequately followed up.

Sam Spring, President & CEO, commented: "The Nyngan project provides the Company an opportunity to explore for porphyry-related gold-copper mineralisation within a relatively under-explored section of a proven and highly prospective belt.  The license is one of the largest in what is Australia's leading porphyry belt.

Alkane Resources Limited's recent discovery's, subsequent to our application for this license, have supported a significant re-rating in the valuations of the few juniors active in this region, on average over 200%; a region which is dominated by the mid-tiers and majors.

The exploration template currently being utilised by Kincora in the Southern Gobi, Mongolia's leading porphyry belt, is very complementary to that proposed at the Nyngan project and proven to be successful in the Lachlan Fold Belt".

Chairman Cameron McRae, noted, "Exploring for Tier 1 scale discoveries is a global competition where jurisdictions vie for investment. Exploration efforts in the Lachlan Fold Belt are greatly assisted by public access to previous groups activities, accelerating the lead-time to drilling.

Furthermore, we note the cooperative drilling program announced earlier this month by the NSW government that looks to financially support under cover exploration and targets that demonstrate strong prospectivity. We plan to apply for State cooperative funding".

Following recent exploration successes, re-rating of valuations for various exploration juniors and increased investment capital being allocated in multiple prospective undercover mineral belts in Australia, the Kincora Technical Committee has undertaken a review of potential opportunities to expand and diversify the Company's project pipeline for prospective Tier 1 and large scale discoveries. The review sought to leverage existing experience and exploration successes in Australia, opportunities pursuing a complementary systematic exploration approach as deployed in Mongolia. It also provides a broadening of our jurisdictional profile and addresses investor's concerns we search in the most attractive jurisdictions.

The review focused on various mineral provinces that host a proven world-class deposit(s), are prospective for further undercover discoveries and included undertaking an appraisal of depth/nature of cover, exploration maturity and competition status. Certain provinces were downgraded due to competition, such as the Paterson, the latter driven by Rio Tinto's Winu discovery and Newcrest's successes with Greatland Gold's Havieron project, and others often a combination of various factors, for example the Gawler Carton due to depth of cover, mature level of exploration, access to licenses and degree of competition.

The Lachlan Fold Belt ("LFB"), Australia's leading porphyry belt, screened technically and commercially well with a number of projects and opportunities identified and reviewed. The Nyngan project was selected based on the ability to secure a large license area, its stratigraphic-structural setting and right rocks, including previous mineralisation from limited drilling to basement, favourable fertility analysis and age.

It was identified that previous favourable results of the last drilling program by Newcrest in the Nyngan regional has been inadequately followed up and existing exploration datasets provided the foundation for a relatively short lead time for a maiden drilling program seeking to test new targets and concepts. The Company benefits from knowledge and previous exploration success in the belt from Technical Committee chairman and board member John Holliday being a principal discoverer and site manager of the Cadia and Marsden porphyry Tier 1 gold-copper deposits in this belt, formerly Chief Geoscientist of Newcrest Mining Limited and is still based in the region.

The Nyngan project covers a significant portion of the interpreted northern sector of the Junee-Narromine volcanic belt, across a greater than 50km strike approximately 225km NNW along trend from the China Molybdenum Group operated Northparkes copper-gold mine, which has a total endowment (past production and current resources) of approximately 20Moz Au-equivalent1.

The structural setting at Nyngan is likened to the Lachlan Transverse Zone ("LTZ") that has been interpreted as a fundamental control on the formation of Newcrest's Cadia-Ridgeway camp (approximately 90Moz Au-Eq endowment) and the Northparkes porphyry deposits1.

The licence covers 762km2 and is situated in close proximity to the Nyngan township. The major mining centres of Northparkes and Cadia-Ridgeway are located approximately 225km and 325km respectively to the SE of the project area. Access is well served by the Mitchell Highway and various secondary sealed/unsealed roads traversing the license.

The Junee-Narromine volcanic belt (Figure 1) is one of the four belts (including the Molong Volcanic Belt) of the Ordovician to early Silurian Macquarie Arc, an intra-oceanic island arc developed along part of the boundary between the Australian and proto-Pacific plates.

Figure 2: Location, access and limited drilling to basement at ELA5844

Only 4 holes have intersected basement across >50km strike of the northern, under cover section of the Junee-Narromine volcanic belt, which hosts a favourable stratigraphic-structural setting, and right rocks

Porphyry copper-gold deposits in the Molong Volcanic Belt are concentrated within the LTZ, an arc-normal trending structure that lies parallel to the transform boundary along the southern margin of the restored Macquarie Arc. The Nyngan project sits on a jog in the Junee-Narromine belt, where there is a structural grain that is parallel to the LTZ, possibly indicating another locus for porphyry formation1.

The project straddles a major tectonic break between the Ordovician Junee-Narromine Volcanic Belt and overlying Siluro-Devonian sedimentary successions (the Jemolong Shelf and Lambie Fluviatile Basin), and the Ordovician metasedimentary Girilambone Group and associated Fifield Arc. This tectonic domain boundary is marked by Cambrian-Ordovician oceanic crustal rocks, and is readily identified in the magnetic data. Silurian-Devonian granite suites represent the youngest Palaeozoic magmatic event in the area. Devonian and older basement stratigraphy in the Nyngan area is overlain by essentially flat-lying Mesozoic and younger sedimentary cover successions1.

The Nyngan region has attracted interest from a number of companies, originally in pursuit of iron-oxide copper-gold and then large tonnage porphyry copper-gold mineralisation. Areas prospective for hydrothermal alteration and porphyry stocks have been widely recognized and interpreted from previous magnetics and gravity surveys by a number of explorers. However, only a few holes have been drilled to the basement in the region, in total 6 drilled below 200 metres depth of which 4 intersected basement between 192 metre and 320 metre depth (see Figure 2). This is despite the region being widely considered to have the right stratigraphic-structural setting and right rocks, including favourable fertility analysis, age dating and previous mineralisation from this limited drilling to basement.

Previous exploration of note on the current Nyngan license area includes original activities by BHP Minerals in the mid 1980's focused on Olympic-Dam style mineralisation. One hole was drilled on the current tenure intersecting a hornblende/gabbroic intrusive at a depth of 192 metres.

Newcrest considered the Nyngan Volcanic Complex to be prospective for analogues of known porphyry copper-gold systems to the south and undertook shallow drilling in 1996 before picking up ground again and drilling deeper in 2005/06. Subsequent lithogeochemistry from Newcrest's last drilling program has matched well the well defined Late Ordovician shoshonitic Macquarie Arc basalts and andesites that are associated with the main mineralised systems in the Lachlan Fold Belt.

Of the last Newcrest drilling program four holes were completed, three intersecting basement at depths of 255 metres to 322 metres. Drill hole ACDNY002 recorded bornite-chalcopyrite-chalcocite-pyrite mineralisation associated with strong hematite alteration in clasts and volcaniclastic conglomerate – highlights included in Figure 3.  No drilling has intersected basement in the license area or general region since this last program of Newcrest's.

Two new discovery's, in both the Molong and Junee-Narromine volcanic belts, have underpinned a re-rating of various listed exploration peers, supported recent capital raisings, and increasing exploration and proposed corporate activities. The landholding across the belt is dominanted by various mid and larger capitalized groups – see Figure 1.

A key catalyst has been a new discovery announced on September 9th, 2019, at Alkane's Bodo prospect within the Northern Molong belt that returned significant gold-copper porphyry mineralisation, including 502 metres at 0.48g/t gold and 0.2% copper with 12 metres at 3.28g/t gold and 0.67% copper2. This intersection has been described my some as the best porphyry exploration discovery in broader Lachlan Fold Belt, away from the three mine centres (Cadia, Cowal and Northparkes), in the last 20 year.

On November 1st, 2019, the NSW government announced its New Frontiers Cooperative Drilling Program and latest round of drilling grants open for application, its third such program4. Under the two-year program a total of A$2 million is available to reimburse half of direct drilling costs with a maximum grant to any individual project of A$200,000.

The program is managed by the Geological Survey of NSW and is part of the NSW Mineral Strategy commitment to promote investment in mineral exploration. Applications are encouraged for drilling projects in relatively untested and prospective regions, to test new geological ideas and/or in areas where the target is under cover. Kincora plans to apply for a grant to support drilling activities at the Nyngan project.

Exploration in NSW, and in particular the Lachlan Fold Belt where considerable exploration and regional studies have taken place, is greatly assisted by public access to previous groups activities, accelerating the lead-time to drilling.

Kincora has reviewed the core and taken samples from the last drilling program to basement by Newcrest (see Figure 4) and the online MinView system is a good example of existing exploration data publicly available in this belt (https://minview.geoscience.nsw.gov.au).

Qualified PersonThe scientific and technical information in this news release was prepared in accordance with the standards of the Canadian Institute of Mining, Metallurgy and Petroleum and National Instrument 43-101 – Standards of Disclosure for Mineral Projects ("NI 43-101") and was reviewed, verified and compiled by Kincora's geological staff under the supervision of Peter Leaman, B.Sc (Hons) Geology, FAusIMM, Senior Vice-President of Exploration of Kincora Copper, who is the Qualified Person for the purpose of NI 43-101.

About Kincora Copper Limited (KCC – TSXV)Kincora is an active junior seeking to make a major discovery in Mongolia, and other prospective complementary jurisdictions.  Our technical team is credited with multiple discoveries of Tier 1 copper assets and in June 2019 the Company completed an oversubscribed $6.25m offering supporting our drilling and program generation strategy.