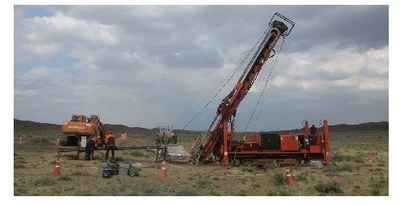 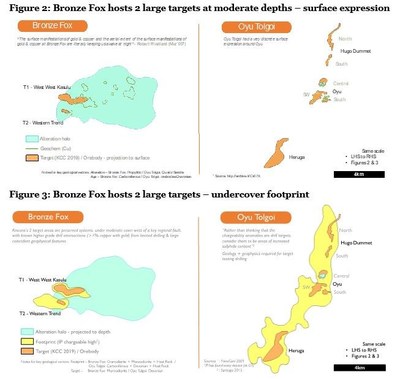 Sam Spring, President and CEO, said, "The recently closed oversubscribed equity raising supports up to 18,000 metres of drilling, ongoing project generation activities and a pipeline of news flow over the next 12 months. This confirms Kincora as the most active foreign listed junior seeking to make the next Tier 1 discovery in Mongolia.

We are excited to be ramping up a multiple rig program, initially focused on two large and independent new targets within our Bronze Fox project. These are known mineralized zones that have been significantly advanced, but not drilled, since 2012. Drilling will then shift to three earlier stage but potentially larger targets at our brownfield East Tsagaan Suvarga project".

Peter Leaman, Senior Vice-President of Exploration, commented, "Bronze Fox has a extremely large mineralised footprint, was excluded and retained by Ivanhoe Mines when I was previously leading the BHP Falcon JV with Ivanhoe, and has only experienced two field seasons of unencumbered drilling.

An independent block model, relogging 24,000 metres of drill core, new geophysics and a full reinterpretation of previous results by our team, has vectored to two new large target zones. These are now the focus of a multiple phase target testing drilling program where success will demonstrate the interpreted significant increase in tonnage and grade potential.

Indeed, the first hole at the West West Kasulu prospect is seeking to confirm our interpretation that previous limited drilling, drilled over the top and away from a large, moderate depth and preserved system but still returned 37 metres of over 1 % copper equivalent on its margin1."

Background to the Bronze Fox project

The Bronze Fox project has an extensive mineralized footprint of over 40km2 within the Bronze Fox Intrusive Complex ("BFIC") – see Figures 2 & 3. Originally a highly regarded Ivanhoe Mines Ltd ("Ivanhoe") project, Bronze Fox was one of the four projects (including Oyu Tolgoi and Kharmagtai) that Ivanhoe excluded from the BHP Joint Venture between 2006-2009. Drilling by Ivanhoe only occurred in 2006 with exploration impacted during the period of the Windfall Profits Tax and initial negotiations to form an Investment Agreement to support the development of Oyu Tolgoi.

Kincora consolidated the ownership of the Bronze Fox project in early 2012. The Company completed only one field season of unencumbered exploration and drilling before being impacted by the 106-license dispute, where the western license of the now two adjacent Bronze Fox project licenses was revoked, which effectively sterilized exploration within the BFIC.

Depressed copper prices, completing the IBEX transaction and access to funding meant the first the major advancement in exploration at Bronze Fox under Kincora's current technical team only occurred in 2017, when Mining Associates was appointed to undertake an independent review.

The block model supports an exploration target range of 416 Mt to 428 Mt, grading 0.26% to 0.30% copper for up to 2,437Mlb of copper and 0.84Moz gold, or 1.3-1.5Mt CuEq metal2. This estimate of the mineralized system is conceptual in nature and currently with insufficient exploration to define a mineral resource. It is uncertain if further exploration will result in the target being delineated as a mineral resource.

More important than the size of the system, the grade and tonnage curves in the block model clearly illustrated the system being bisected by a key regional fault (named the "Tov" fault) at the West Kasulu prospect that lies within the western central portion of the BFIC.

Two zones were identified. Particular encouragement is provided by the most prospective parts of the porphyry system to the west of the Tov fault in monzonite zone having returned more favourable grades with limited previous exploration and having effectively been sterilized to Kincora (due to the 106 license dispute and prior access, both now resolved). This zone is under moderate cover in an interpreted preserved and favourable level of the porphyry system, with demonstrated higher grade potential.

Prior exploration by Ivanhoe and Kincora had focused on the eastern granodiorite zone of the Tov fault that outcrops. This region has returned an extensive low-grade mineralisation, with localized higher grade, in an interpreted eroded level of the porphyry system.

Since the Mining Associates review, 24,000 metres of drill core at the BFIC has been reviewed and relogged by Kincora, benefitting from the 8000 metres previously relogged by a copper major under a period of exclusivity (when the western license was still under dispute). This relogging exercise also upgraded the geological dataset's quality to be sufficient for NI 43-101 purposes.

Previous geophysics was excluded from the scope of the Mining Associates review. With the improved geological knowledge, relogging of core and further surface geology, specialist geophysical consultant Barry de Wet undertook a detailed geophysical review. This included a full reinterpretation of the Search IP survey (which was completed the year proceeding the last drilling at the BFIC), the SJ Geophysics IP survey (completed only last field season), and new gravity and magnetic survey data.

Demagnetisation (with clear large intrusions extending to depth) is also coincident with these higher chargeability zones on the western zone of fault, both immediately on strike from the Mining Associates block model, where 260 metres of a 1km plus strike was inadequately drill tested, as well as a potentially significantly larger and newly understood southerly western zone. These two zones are currently named the West West Kasulu and the Western Trend.

The independent technical review commissioned by our largest shareholder before being cornerstone to the recently closed oversubscribed offering supported a "discovery" having already been made at West West Kasulu, within the underexplored target zone to the west of a key regional fault. The review also stated this target area has been significantly upgraded by recent exploration activities.

A scissor hole to F62, the first high priority hole of the 2019 drilling program that has commenced at the West West Kasulu target, will for first time test the strongest and core chargeability high zone coincident with the deep seated magnetic low at Bronze Fox, drilling into the monzodiorite zone which supported the 37m at >1%CuEq intersection1. A second drill rig has been mobilized and expected to be turning within the week at the Western Trend target.

The 2019 field season drilling program is designed to advance the strike potential away from the fault to the west in these two preserved monzodiorite systems and demonstrate the interpreted significant increase in tonnage and grade potential.

Proceeds of the recently closed oversubscribed offering will support up to 18,000 metres of drilling in multiple work programs primarily within two known mineralised projects, Bronze Fox and East Tsagaan Suvarga, and advancing our earlier stage pipeline and expansion strategy.

Drilling two high priority target zones at Bronze Fox is the commencement of a maiden target testing, drilling for discovery program now ramping up following Kincora originating the first modern systematic district scale exploration in the highly mineralized but vastly underexplored Southern Gobi copper belt in late 2016.  Current activities at the West West Kasulu target, and shortly also at the Western Trend target, is the first drilling program within the BFIC since 2012.

A budget of up to $2.2 million is expected to support a multiple phase drilling program for up to 8,100 metres at Bronze Fox, and potential maiden resource definition and mining license conversions.

Drilling for up to 6,200 metres at East Tsagaan Suvarga, testing three target zones, is expected to commence once first phase drilling of the 2019 program at Bronze Fox is completed.

With the Company ramping up drilling of our existing exploration portfolio and focus on ongoing expansion opportunities, Kincora is the most active foreign listed junior seeking to make the next Tier 1 discovery in Mongolia.

All amounts are expressed in Canadian dollars unless stated otherwise.

Kincora operates in the Gobi copper belt of South Mongolia.  It has a dominant land position and is undertaking the first modern systematic district scale exploration, centred on the Bronze Fox and East Tsagaan Suvarga ("ETS") porphyry projects. This wholly owned portfolio has attracted a first-class technical team who are credited with multiple discoveries of Tier 1 copper deposits.

Reinterpretation of existing data (incl. relogging & block model analysis of over 24,000m of drilling at Bronze Fox), the acquisition of additional geophysical data (Induced Polarization, gravity & magnetics at both projects) and first phase drilling at ETS since late 2016 under the current technical team has advanced both projects significantly, resulting in new and large geological targets.

All data has been iteratively interpreted in a technically rigorous workshop format by the Kincora in-house technical team with appropriate involvement of specialist consultants and advisors to the technical committee.  This has ensured that quality targets have been identified and prioritised for drilling, with a detailed multiple target, multiple phase drill programs budgeted at Bronze Fox and ETS. These programs are fully permitted and now funded.

These targets sit in the "target testing" to "advanced drilling" phases of projects development, which for copper porphyries offers the maximum uplift in project (and shareholder) value. These targets, for their respective stages of exploration, are considered "as good as you get within a global setting". Confirmation of our geological models with positive results from the proposed drilling have the potential to demonstrate, and in time, elevate both projects to Tier 1 or world-class status1.

1 Kincora recognises that the terms "World Class" or "Tier 1" are subjective and our targets are conceptual in nature, yet to be supported by drilling results to support an sufficient understanding of their potential grade or scale, let alone potential economics that are commonly associated with such terms. However, both the Bronze Fox and East TS projects have complementary geological and geophysical characteristics, with significant target zone potential and are in known mineralised systems in a proven prolific but underexplored copper porphyry belt. It is the view of Kincora that confirmation of our geological models with positive results from the proposed drilling have the potential to demonstrate, and in time, elevate both projects to Tier 1 or world-class status.

The scientific and technical information in this news release was prepared in accordance with the standards of the Canadian Institute of Mining, Metallurgy and Petroleum and National Instrument 43-101 – Standards of Disclosure for Mineral Projects ("NI 43-101") and was reviewed, verified and compiled by Kincora's geological staff under the supervision of Peter Leaman, Senior Vice-President of Exploration of Kincora Copper, who is the Qualified Person for the purpose of NI 43-101.