VANCOUVER, Aug. 27, 2018 /CNW/ - Kincora Copper Ltd. (the "Company", "Kincora") (TSXV:KCC) is pleased to outline recent extensive exploration activities at its wholly owned Bronze Fox project and planned activities for the remainder of the current field season. The focus of these activities are multiple new target zones proposed for drilling at, or on the margin of, the western license relating to the western zone or south-western periphery of the West Kasulu target and Bronze Fox Intrusive Complex ("BFIC"), where Kincora previously has had only one field season of unimpeded drilling activities. 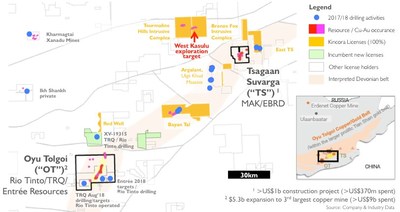 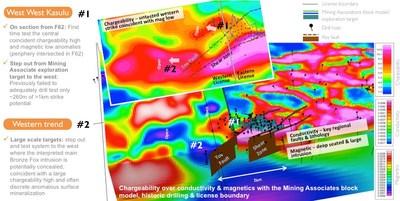 Previous drilling at the western zone of the West Kasulu exploration target, across a key regional fault, inadequately tested only 260 metres of a >1km strike. Three of the four holes drilled by Kincora returned higher grade mineralization, within boarder lower grade, including hole F62 which intersected 13 metres of 1.15% Cu or 1.41% CuEq within 794 meters at 0.40% CuEq1.

SJ Geophysics Ltd. ("SJ") has been contracted to complete a series of DC resistivity and induced polarization ("IP") survey lines to further refine the identified high-grade targets before drilling this field season. The SJ survey will extend detailed coverage to the west and is expected to be completed in September, advancing a newly identified southerly western target zone and a second interpreted intrusive complex where surface exploration has yielded encouraging results.

Sam Spring, President & CEO of Kincora, commented: "When last drilling the western zone of West Kasulu, Kincora had a $40-50 million market capitalization, attracted NDAs with 14 industry players, an offer for the Company and separate period of exclusivity. There have only been two field seasons of unencumbered drilling at the Bronze Fox project, one by Ivanhoe (2006) and the other by Kincora (2012). Our understanding of the project has been significantly advanced since this time, with Kincora, post the IBEX merger, also now holding the dominant position in the rest of the Oyu Tolgoi-Tsagaan Suvarga copper belt".

Senior Vice-President of Exploration, Peter Leaman, stated, "Earlier this year we announced a large-scale copper-gold exploration target. More important than this tonnage was the improved geological understanding, including the identification of a key regional fault and change in lithology that bisects the West Kasulu mineralized system at Bronze Fox.

Our team has relogged 24,000 metres of drill core and a full reinterpretation of previous geophysics has been undertaken by specialist consultant Barry de Wet. West Kasulu is already one of the largest copper-gold systems in Mongolia and with only modest drilling. Recent activities have identified a number of high priority drill targets to the west where previous exploration was impeded by access issues".

Upon completion of the geophysical review and proposed SJ survey, specialist consultant Barry de Wet stated: "A number of significant scale and very attractive coincident geophysical anomalies have been identified at Bronze Fox, particularly in the western zone of West Kasulu that complements limited drilling and warrants priority follow up. There is an extremely large mineralized system that remains under explored at Bronze Fox, the main target zones to the west of previous drilling.

The Bronze Fox project is one that was previous excluded by Ivanhoe from the joint venture I was involved with at BHP. Successful drilling of the outlined targets is likely to attract the attention of further industry players".

The BFIC includes a western central portion where 76 holes were drilled for 24,139 metres across a 1.4 km by 2.4 km zone at a prospect named by Kincora as West Kasulu (known as "Bronze Fox" by Ivanhoe Mines, who undertook drilling in 2006).

Since the last drilling at the West Kasulu prospect in 2012 by Kincora, which included only 4 holes in the now defined western exploration target zone and covered a 6-month period, there have been the following key exploration activities:

The review of the West Kasulu prospect by Mining Associates announced earlier in the year (refer to the January 25th, 2018 press release) supported an exploration target of:

More important than the large-scale exploration target, the Mining Associates review included an independent block model that advanced the understanding of the mineralized system at West Kasulu, which is bisected by a key regional fault within the western central portion of the BFIC.

Since the Mining Associates review, 24,000 metres of drill core at West Kasulu has been reviewed and relogged by Kincora, benefiting from the 8000 metres previously relogged by a copper major under a period of exclusivity (when the western license was still under dispute). This relogging exercise also upgraded the geological dataset's quality to be sufficient for NI 43-101 purposes.

Previous geophysics was excluded from the scope of the Mining Associates review. With the improved geological knowledge, relogging of core and further surface geology, specialist geophysical consultant Barry de Wet has undertaken a detailed geophysical review. This included a full reinterpretation of the Search IP survey, which was completed the year proceeding the last drilling at West Kasulu.

Demagnetisation (with clear large intrusion extending to depth) is also coincident with these higher chargeability zones on the western zone of fault, both immediately on strike from the Mining Associates block model, where 260 metres of a >1km strike was drill tested, as well as a potentially significantly larger and newly understood southerly western zone.

New high-grade infill and extension drill targets within the western zone of the West Kasulu exploration target zone and a newly identified southerly western target zone have been refined.

These include looking to test the central portion of the interpreted target on a section of the aforementioned hole F62.

The previously intersected higher grade zone in hole F62 corresponds to a coincident moderate chargeability and smaller magnetic low zone, which projects to the south of the Tov fault with strengthening chargeability resolution and thickening coincident magnetic low. This latter zone offers significant strike potential with F62 previously intersecting the interpreted periphery of the main target zone, which remains open to the west.

Success confirming the updated geophysical coincident chargeability high/magnetic low model and strike to the south of the fault with favorable grade would significantly and positively upgrade immediate target area (both tonnage and grade) and its strike potential to the west.

A similar detailed systematic approach has been undertaken at the other high priority high-grade drill targets proposed for drilling this field season.

A series of 6 North-South lines will be undertaken by the SJ survey, for 33.4 line kilometres, ahead of the proposed drill program. The survey will provide more detailed IP coverage to the west of the previous Search survey (which at the time was restricted due to access issues to the western license).  The SJ survey will provide coverage across a second intrusive complex where first phase pan concentration survey results, coupled with previous geophysics, have refined a coincident area for follow up mapping and soil sampling.

About KincoraKincora is a junior resource company engaged in the acquisition, exploration and development of mineral properties, with a focus on Tier 1 copper-gold projects in Mongolia. For further information: www.kincoracopper.com.

Qualified PersonThe scientific and technical information in this news release was prepared in accordance with the standards of the Canadian Institute of Mining, Metallurgy and Petroleum and National Instrument 43-101 – Standards of Disclosure for Mineral Projects ("NI 43-101") and was reviewed, verified and compiled by Kincora's geological staff under the supervision of Peter Leaman (M.Sc. Mineral Exploration, FAusIMM), Senior Vice-President of Exploration of Kincora Copper, who is the Qualified Person for the purpose of NI 43-101.