TORONTO, March 4, 2019 /CNW/ - The Winner of the 2019 RBC Taylor Prize is Kate Harris (Atlin, BC) for her book Lands of Lost Borders: Out of Bounds on the Silk Road, published by Knopf Canada.

The $30,000 award was announced today by Prize founder and Chair Noreen Taylor during a gala luncheon celebrating this year's finalists at the Omni King Edward Hotel in downtown Toronto. In addition to the cash prize, Harris received a crystal trophy and a leather-bound version of her book. 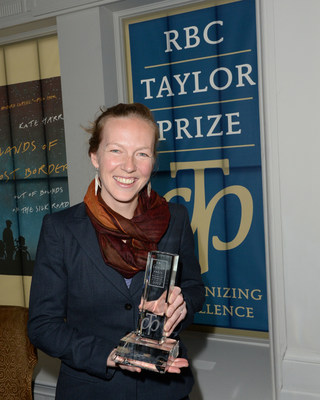 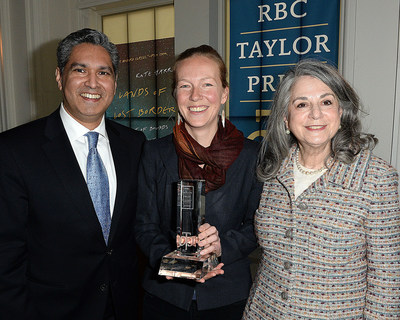 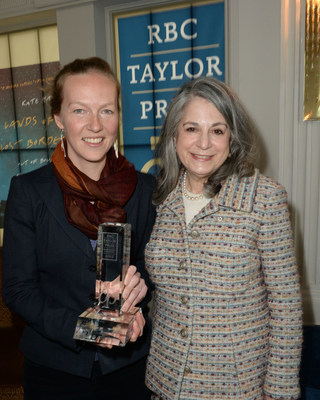 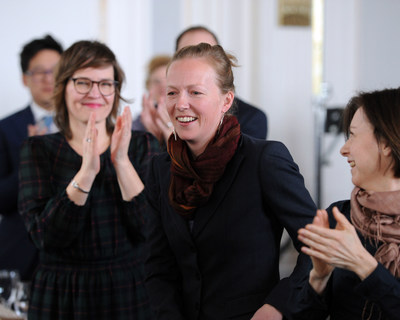 Noreen Taylor, prize founder and chair of the Charles Taylor Foundation expressed her admiration, commenting: "In an increasingly complex and volatile time, Kate Harris chose to look beyond the challenges of the here-and-now, and instead, remind us to care for one another, to care about the world we live in and to care about what makes living most rewarding. It is a much-needed message, superbly told. Congratulations!"

Vijay Parmar, president of RBC PH&N Investment Counsel, added: "On behalf of RBC Wealth Management, congratulations to Kate Harris on achieving this distinguished honor and in joining an illustrious list of writers who have all meaningfully contributed to Canadian literature with their distinctive voices. As Presenting Sponsor, we are proud to partner with the Charles Taylor Foundation and its continued efforts to support Canadian non-fiction writers by providing a platform to showcase their exceptional talent, gain international exposure and advance their careers."

In its citation of the winning book, the jury notes from her vantage point as a student of the history of science, explorer and adventurer, Kate Harris presents a rare and unique vision of world, and explores the nature of boundaries. Unable to realize her childhood dream of travelling to Mars, she decides to trace Marco Polo's Silk Road by bicycle. Vivid descriptions of the places and people she meets inspire deep and eclectic reflections on the nature of the world, wilderness, and the struggle of humans to define and limit them. This is a book that changes how one thinks about the world and the human compulsion to define it.

About the winner: Kate Harris has written for The Walrus, Canadian Geographic, and The Georgia Review, among other publications. A Rhodes scholar (Oxford — History of Science) with degrees from MIT and UNC Chapel Hill, she was named one of Canada's top modern-day explorers and has won several awards for her nonfiction writing. She lives off-grid in a log cabin in Atlin, BC. Lands of Lost Borders is her first book.

The four remaining finalists — Just Let Me Look at You: On Fatherhood by Bill Gaston (Victoria BC), published by Hamish Hamilton/Penguin Canada; Jan in 35 Pieces: A Memoir in Music by Ian Hampton (Vancouver, BC), published by Porcupine's Quill; All Things Consoled: A Daughter's Memoir by Elizabeth Hay (Ottawa, ON), published by McClelland & Stewart; Mamaskatch: A Cree Coming of Age by Darrel J. McLeod (Sooke, BC), published by Douglas & MacIntyre — each received a $5,000 honorarium, a leather-bound version of their book, and extensive publicity.

The jurors for the 2019 RBC Taylor Prize are Camilla Gibb, Roy MacGregor and Beverley McLachlin. They read and evaluated over 100 books written by Canadian authors to determine the winner for this, the eighteenth awarding of the prestigious prize.

The RBC Taylor Prize was established in 1998 by the trustees of the Charles Taylor Foundation, to commemorate Charles Taylor's pursuit of excellence in the field of literary non-fiction. It was initially a bi-annual award, was first awarded in 2000 and has been awarded annually since 2004. The Prize is awarded to the author whose book best combines a superb command of the English language, an elegance of style, and a subtlety of thought and perception, and consists of $30,000 for the winner and $5,000 for each of the remaining finalists. All authors are presented with a custom leather-bound version of their shortlisted book at the awards ceremony. All finalists receive promotional support for their nominated titles.

Sharing a commitment to emerging Canadian talent, the Charles Taylor Foundation and RBC will also grant the sixth annual RBC Taylor Prize Emerging Writers Award. Shortly after the announcement of the 2019 Prize, its winner will name their choice of emerging author to receive this $10,000 award.

Note: contact Stephen Weir to receive a copy of a short video of today's Prize Announcement suitable for broadcast