LOS ANGELES, Nov. 30, 2017 /CNW/ -- You're a mean one, Mr. Grinch… Unless you're bringing gamers holiday gifts! Leading mobile game maker, Jam City, in collaboration with Dr. Seuss Enterprises and White Space Entertainment, is bringing one of the world's most popular characters, Dr. Seuss's the Grinch, to mobile gaming for the first time ever this holiday season. 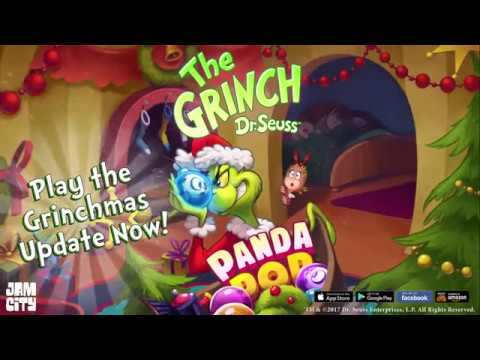 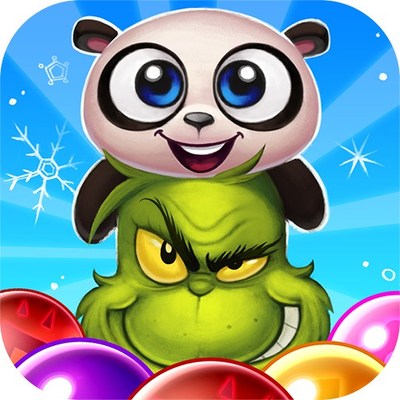 Panda Pop, the world's most popular bubble shooter game with over 100 million downloads, is featuring a complete "Grinchmas" holiday takeover from now until January. The title, in which players pop bubbles to save baby pandas, is getting Who-ified game artwork and levels, major Grinch in-game events with prizes, Grinch Gifts, a brand new Grinch costume for Mama Panda, a Grinch starter pack for all new players, and, last but not least, a Grinch Global Save the Babies event where players will team up to save 600 million panda babies and win prizes!

"It is a unique honor to be working with such a wonderfully nostalgic and iconic brand.  When you combine the massive worldwide appeal of Dr. Seuss's Grinch with one of the most delightful, creative puzzle games in the world, you have a recipe for holiday gaming magic," said Josh Yguado, Co-Founder, President and COO of Jam City. "Our entire Panda Pop team's hearts have grown three sizes at the chance to make this a special holiday season for our millions of players."

Dr. Seuss is one of the most beloved children's book authors of all time having written and illustrated 45 children's books, including the holiday classic, How the Grinch Stole Christmas! This year marks the 60th anniversary of this perennial favorite story which has been translated to a TV special, film and stage.

"The Grinch's whimsical tale has been a part of holiday traditions for sixty years now," said Susan Brandt, President of Dr. Seuss Enterprises. "By organically featuring the Grinch in a compelling, interactive mobile game like Panda Pop, we can bring this familiar tale to fans in a completely new way."

"Jam City and Panda Pop were at the top of our list when looking for a strong gaming partner to bring the Grinch to mobile platforms for the first time," said Stephanie Sperber, CEO of White Space.  Sean Haran, COO and Head of Games at White Space Entertainment, adds, "The game experience seamlessly integrates the Grinch in the Panda Pop world for a fun holiday celebration."

Panda Pop is free to play and is available on mobile devices via the App Store and Google Play.

About Dr. SeussTheodor "Seuss" Geisel is quite simply the most beloved children's book author of all time. Winner of the Pulitzer Prize in 1984, three Academy Awards, two Emmy Awards, three Grammy Awards, and three Caldecott Honors, Geisel wrote and illustrated 45 books for children. Hundreds of millions of copies have found their way into homes and hearts around the world. While Theodor Geisel died on September 24, 1991, Dr. Seuss lives on, inspiring generations of children of all ages to explore the joys of reading.