ATLANTA, March 7, 2019 /CNW/ -- Habitat for Humanity, Lowe's and hundreds of women volunteers will unite in 18 communities in the United States, India and Canada for the first International Women Build Day, a global event focused on building and improving homes while raising awareness of affordable housing issues facing women and their families. The build day is also a tribute to International Women's Day, March 8. 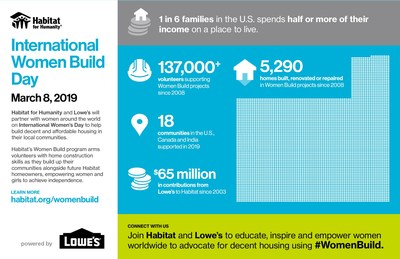 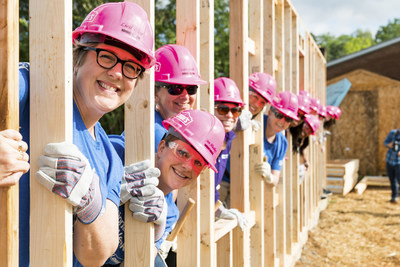 "Homeownership empowers women here in the United States and around the world. Owning an affordable home can remove barriers to opportunity and success and lead to improved health, stronger childhood development and financial stability," said Tjada McKenna, Chief Operating Officer, Habitat for Humanity International. "Women have the power to make remarkable changes within their communities. That's why we are excited to partner with Lowe's in bringing together women from all walks of life for an opportunity to lift each other up, learn from one another and join together in building a safe and decent place to call home."

For many, the ability to own and afford a home is an unattainable dream, and the issue of affordable housing is a growing global issue.

"Countless women struggle to provide shelter for their families. Even in the United States, nearly 19 million households spend half or more of their income on a place to live," said Jennifer Weber, Executive Vice President and Lowe's Foundation Chair. "Too many families must decide between housing and other critical needs, such as  food, health care, childcare, education and reliable transportation. We stand with Habitat for Humanity on International Women's Day to empower women to share their stories through messages of optimism and action to support safe and affordable housing."

In Canada, 1 in 8 households do not meet the country's core housing standards of adequacy, suitability or affordability. In India, the urban housing shortage stands at 18.78 million units, out of which about 96 percent is considered in the Economically Weaker Section and Low Income Group categories.

Lowe's partnership with Habitat began in 2003 and since then, the company has committed more than $65 million to support the housing nonprofit.

To learn more, visit habitat.org/womenbuild or follow #WomenBuild on social media to share and view stories from around the world.

About Habitat for HumanityDriven by the vision that everyone needs a decent place to live, Habitat for Humanity began in 1976 as a grassroots effort on a community farm in southern Georgia. The Christian housing organization has since grown to become a leading global nonprofit working in local communities across all 50 states in the U.S. and in more than 70 countries. Families and individuals in need of a hand up partner with Habitat for Humanity to build or improve a place they can call home. Habitat homeowners help build their own homes alongside volunteers and pay an affordable mortgage. Through financial support, volunteering or adding a voice to support affordable housing, everyone can help families achieve the strength, stability and self-reliance they need to build better lives for themselves. Through shelter, we empower. To learn more, visit habitat.org.

About Lowe's Lowe's Companies, Inc. (NYSE: LOW) is a FORTUNE® 50 home improvement company serving more than 18 million customers a week in the United States, Canada and Mexico. With fiscal year 2018 sales of $71.3 billion, Lowe's and its related businesses operate or service more than 2,200 home improvement and hardware stores and employ approximately 300,000 associates. Founded in 1946 and based in Mooresville, N.C., Lowe's supports its hometown Charlotte region and all communities it serves through programs focused on safe, affordable housing and careers in the skilled trades. For more information, visit Lowes.com.