VANCOUVER, Jan. 8, 2018 /CNW/ - IMPACT Silver Corp. ("IMPACT" or the "Company") is pleased to provide an exploration update on a new and developing gold target within the Royal Mines of Zacualpan Silver District in central Mexico.  Although work will be continuing on the silver-gold veins that have provided five centuries of historical production at the Zacualpan District, the work at Santa Teresa represents a new initiative for IMPACT's exploration team to explore different sorts of mine making targets. 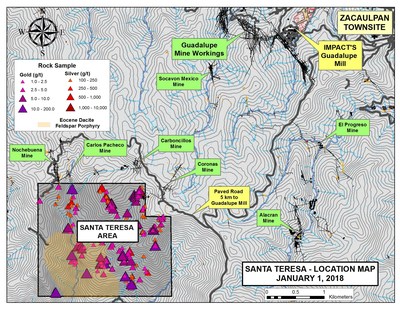 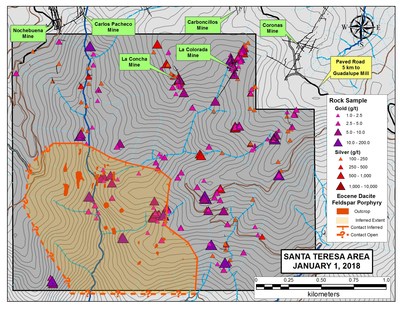 SummaryAs a result of technical interpretation and additional field work, a new, possible bulk tonnage, gold target named Santa Teresa is being advanced by the IMPACT exploration team.  Channel, chip and grab samples of bedrock have returned grades ranging up to 114.5 g/t gold, with 17 samples having more than 10 g/t gold and 197 greater than 1 g/t gold. Additional rock sampling and geological mapping has been initiated to designate drill targets.

Santa Teresa is located in the Valle de Oro sub-district of dominantly gold veins located four kilometers southwest of IMPACT's producing Guadalupe mill and immediately to the south of IMPACT's past producing Nochebuena (silver) and Carlos Pacheco (gold) mines.  To the northeast is the large Coronas mine, one of the oldest and better known past producers of the Zacualpan district.

Background The Royal Mines of Zacualpan Silver District of west-central Mexico is arguably the oldest silver-gold mining district of Mexico. It is located 100 kilometers southwest of Mexico City.  IMPACT has a dominate land position of some 357 square kilometers and last year celebrated ten years of continuous production in the district.

To date over a thousand silver and/or gold bearing veins have been recognized through IMPACT'S exploration efforts in the district (such veins having at least one assay sample exceeding 100 g/t silver or 1.0 g/t gold). As well some 5,000 old mine or exploration workings have been located and catalogued.   These old workings, along with geological maps, geophysical surveys, 75,000 soil samples and some 48,500 rock samples form the basis of a GIS Database (Geographic Information System) that has been utilized for the past ten years to "organically discover" production tonnage for IMPACT's Guadalupe and Capire mills.

GeologyNumerous north-south striking veins similar to the Nochebuena or Carlos Pacheco veins transect the Santa Teresa area.  Elsewhere in the Zacualpan district veins of this orientation have the greatest degree of structural and grade continuity, producing many of the district's better mines historically. In addition, there are number of northeast trending, northwest dipping veins that resemble the historic Coronas mine in structural style. Rock sampling by IMPACT has produced gold grades ranging up to 114.5 g/t, with 17 samples having more than 10.0 g/t, and 197 greater than 1.0 g/t gold.  In proximity to the historic Coronas Mine some sizable old underground workings exist. However elsewhere in the Santa Teresa area there is little evidence of historical exploration or mine development, which the low sulphide content of these auriferous veins may have caused these veins to be overlooked by the historical prospecting.

Roughly half of the veins hosting the better gold grades have extremely low sulphide contents. Native gold or electrum would be the most likely host minerals and would likely be amenable to gravity concentration methods.   These veins are most abundant in the southwestern portion of the Santa Teresa area where the density of these north-south striking veins is the highest of the entire Zacualpan district.  In addition, this portion of the Santa Teresa area contains the only known outcrops of an Eocene Feldspar Porphyry within the Zacualpan district, which are the only known magmatic intrusive rocks on the property.  Fifty-two porphyry outcrops have been mapped over a one kilometer square area with the southern and western boundaries currently undefined.  Previously this rock type had been observed as clasts within the gold-bearing portions of the Nochebuena-type hydrothermal breccias of the Nochebuena and Carlos Pacheco mines.  These Eocene Feldspar Porphyries are thought to be similar to the Tilzapotla Rhyolite, an enigmatic intrusive stock located midway between the Taxco and Zacualpan Districts that is considered to be the heat source responsible for the formation of the Zacualpan Southeast and Taxco veins.  It has been dated at 32 million years, the same age as a vein in the Taxco District, and by inference a similar age has been assigned to the Zacualpan veins.  Associated with this Feldspar Porphyry are the highest gold/silver ratios for the entire Zacualpan District, again suggesting an environment of localized, very high heat flow with the Feldspar Porphyry the heat engine for the formation of these gold veins.

Future PlansFor 2018 in preparation for drilling an extensive geological mapping and rock sampling program will be conducted on the brecciated cap rocks overlying this Feldspar Porphyry, as well as the many north-south trending veins that transect the Santa Teresa area.

Brian V. Hall, M.Sc., P.Geo., a Qualified Person under the meaning of Canadian National Instrument 43‑101, has approved the technical content of this news release. A map of the Santa Teresa area is attached to this news release or can be found on the Company website at www.IMPACTSilver.com.

About IMPACT Silver:IMPACT Silver Corp. is successful silver-gold explorer-producer with two processing plants on adjacent districts within its 100% owned mineral concessions covering 357km2 in central Mexico. Over the past ten years over 7.7 Moz of Silver has been produced, generating revenues of $160 million, with no long-term debt. In the historic Royal Mines of Zacualpan Silver District three underground silver mines feed the central 535 TPD Guadalupe processing plant.  To the south, in the Mamatla District the Capire processing plant is currently rated at 200TPD, but is expandable.  It is adjacent to an open pit silver mine with a a NI-43-101 compliant resource that is awaiting higher silver prices to be restarted. Given the challenging markets last few years, IMPACT has focused its exploration efforts on high success rate silver targets, with quick production profiles and proximity to Guadalupe processing plant. Following a successful decade of exploration success to production cash flows, IMPACT has proven the Zacualpan District to be prolific in generating high grade epithermal silver-gold production feeds. With markets more perceptive to early exploration results, in 2018 IMPACT continues to add emphasis to exploration work.  Additional information about IMPACT and its operations can be found on the Company website at www.IMPACTSilver.com.

On behalf of IMPACT Silver Corp.

Forward-Looking and Cautionary StatementsThis IMPACT News Release may contain certain "forward-looking" statements and information relating to IMPACT that is based on the beliefs of IMPACT management, as well as assumptions made by and information currently available to IMPACT management. Such statements reflect the current risks, uncertainties and assumptions related to certain factors including but not limited to, without limitations, exploration and development risks, expenditure and financing requirements, title matters, operating hazards, metal prices, political and economic factors, competitive factors, general economic conditions, relationships with vendors and strategic partners, governmental regulation and supervision, seasonality, technological change, industry practices, and one-time events. Should any one or more risks or uncertainties materialize or change, or should any underlying assumptions prove incorrect, actual results and forward-looking statements may vary materially from those described herein. IMPACT does not assume the obligation to update any forward-looking statement.

The Company's decision to place a mine into production, expand a mine, make other production related decisions or otherwise carry out mining and processing operations, is largely based on internal non-public Company data and reports based on exploration, development and mining work by the Company's geologists and engineers. The results of this work are evident in the discovery and building of multiple mines for the Company and in the track record of mineral production and financial returns of the Company since 2006. Under NI43‑101 the Company is required to disclose that it has not based its production decisions on NI43‑101‑compliant mineral resource or reserve estimates, preliminary economic assessments or feasibility studies, and historically such projects have increased uncertainty and risk of failure.