TORONTO, Nov. 13, 2017 /CNW/ - We are less than 100 days away from the Winter Games and it is time for Canadian pride to shine. Cheerios knows that cheer is powerful. In fact, we believe a little bit of cheer can go a long way for athletes on Team Canada. Cheerios is bringing back cheer cards to give our team that little extra boost they need as they go for gold. 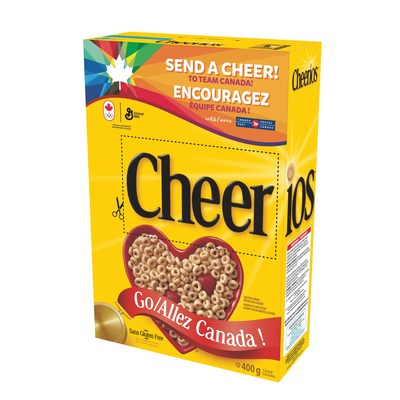 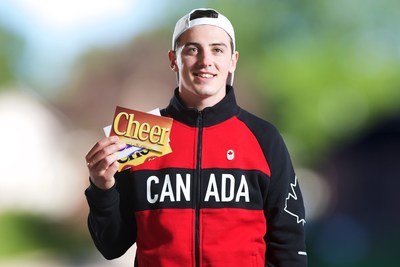 While lending its support to some of Canada's top athletes is a start, each and every athlete needs Canadians' cheers in order to make the Games unforgettable, so the Cheerios Cheer Card campaign will deliver personal messages of cheer to Team Canada athletes right before they compete. Previous Olympic campaigns, saw over 36,000 cards distributed and this year Cheerios is aiming to go even bigger!

To ensure Canadians are greeted with a literal wall of "Cheer" in grocery stores across the country, Cheerios has removed its name from the front of its iconic box for the FIRST time ever, moving the "ios" in Cheerios to the side panel of the box. The new Cheer boxes will encourage Canadians to cheer on Team Canada through November and December and digital cheers can be sent after that time at BeTheCheer.ca.

"We are hoping that Canadians will join us to support Team Canada as we showcase our world-class athletes. We want to see Canadian pride shine and send even more cheer cards to our athletes competing at PyeongChang 2018" says Emma Eriksson, VP Marketing at General Mills Canada. "Cheerios has been a proud supporter of Team Canada for many years and we are excited to once again partner with so many great athletes as they go for gold."

Canadians can simply cut out the Cheer card on the front of the Cheerios box, fill it in with an encouraging message for a Team Canada athlete and drop it in a mailbox. With the help of Canada Post, Cheerios will deliver the card, free of charge, to the athlete at Canada Olympic House in South Korea to Cheer them on at the 2018 Olympic Winter Games.

Established in 1954, General Mills Canada Corporation is based in Mississauga, Ontario.  The company is dedicated to serving the world by making food people love.  Its most popular products include Cheerios* and Honey Nut Cheerios* cereals, Nature Valley* snacks, Yoplait® and Liberte* dairy products, and Old El Paso* Mexican products.    General Mills is a proud and long-time supporter of the Canadian Olympic team, Hockey Canada, Concerned Children's Advertisers and United Way.*Trademarks of General Mills or its affiliates® Trademarks of YOPLAIT MARQUES S.N.C. (France) used under license.