RIYADH, Saudi Arabia, March 26, 2019 /CNW/ -- The World Ethnogames Confederation (The Kyrgyz Republic) in cooperation with the Camel Club (Saudi-Arabia) made history in the Kingdom of Saudi Arabia. For the first time ever a global cultural event with 2,000 participants from 90 countries were hosted from March 9-19, 2019 in the framework of the King Abdulaziz Camel Festival. 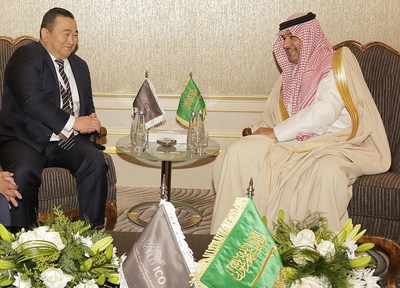 The main goal of "Nomad Universe", which has no comparable counterparts worldwide, was the preservation and revival of historical heritage and diversity of the original culture of peoples and ethnic groups from all over the world. 2,000 participants performed & presented their cultural treasures in Art, Sport & Science.

Sheikh Fahad, CEO of Camel Club, expressed the great value of "Nomad Universe" for Saudi Arabia: "We saw so many traditional cultures from all over the world, this was an extraordinary premiere and we are very happy to have this festival in our country, in Saudi Arabia. We welcomed all of them and we opened our hearts and minds for all these cultures & ethnic groups. From the bottom of our heart we thank all participants for their visit in our country and their great ethno-cultural performances."

All participants, such as 35,000 visitors per day from all points of the Arabian Peninsula were astonished and amazed by the great unity & friendship between so many different cultures. The festival was surrounded by a great feeling of peace and intercultural dialogue. "Nomad Universe" was an expression of the cultural and historic tradition and spiritual identity of its practitioners and served to unite communities regardless of social status, fostering a culture of teamwork, responsibility and respect.

"Through the revival of cultural values and the philosophy of centuries-old traditions, 'Nomad Universe' promoted cultural mutual enrichment and peace among the peoples of the world. It united the diversity of various peoples and ethnic groups and kept the deep philosophy and spiritual sacredness of our ancestors alive," as Mr. Askhat Akibayev, President of World Ethnogames Confederation pointed out.

Ethno-Sport competitions were being performed, among others, like Horse Competition "Kok Boru", Horseback Wrestling "Er Enish," Traditional Archery and Traditional Hunting with Falcons, Golden Eagles and Taigan dogs "Salbuurun". Aside from ethno-sport competitions, art & science was also an important element. Cultural activities were uniting the crème de la crème of ethno-cultural artists, folklore groups, ensembles such as famous sculptors and painters from all over the world.

"Nomad Universe in the framework of The King Abdulaziz Camel Festival was a global summit of peoples and ethnic groups, who came together for preserving and demonstrating their uniqueness.  A great role model for unity in diversity and in-line with Saudi Arabia´s 2030 Vision," said Mr. Askhat Akibayev, President of The World Ethnogames Confederation.

Because of the great success of "Nomad Universe", Saudi Arabia will further host the Festival on an annually basis until 2030.