OTTAWA, Oct. 20, 2017 /CNW/ - Northern Shield Resources Inc. ("Northern Shield" or the "Company") [TSX-V: NRN] is pleased to announce that most of the assays from the 2017 drilling program and surface sampling have been received. In total, 982 core samples were processed from the eight drill-holes completed this year along with 47 surface samples. 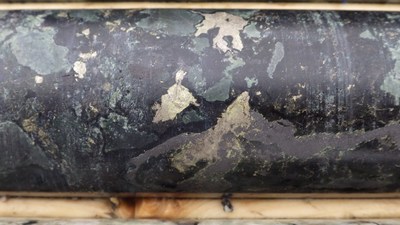 Western Copper ZoneDrill-holes HK17-08,09,12 and 16 tested various aspects of the Lower Olivine Websterite (LOW) in the Western Copper Zone which was identified by the Company in 2016 as the principal host to the mineralization. All four of these drill-holes intersected mineralization hosted in the Lower Olivine Websterite, which can now be traced through drilling and surface sampling for a 3,000 metre strike-length and a down-dip extension of over 1,200 metres. It remains open along strike to the north and south and, down-dip to the east. The thickness of the mineralized Lower Olivine Websterite increases down-dip (eastward) from 9.46 in drill-hole 16HK-01 (Discovery Zone area) through 15.08 metres in drill-hole 17HK-08 to a total of 31.85 metres in 17HK-12 where the zone bifurcates.

Summary of select mineralized intervals from the Western Copper Zone:

Calculated metal tenors (grades normalized to 100% sulphide) remain relatively consistent throughout the Lower Olivine Websterite with copper ranging between 12-15%, nickel 4-6% and PGE 10-17 g/t.   The last drill-hole of this season's program, hole 17HK-16, was drilled approximately 900 metres south of the Discovery Zone, in an area with no outcropping surface mineralization nor geophysical anomalies. This drill hole contains the highest individual copper and nickel assay from drill-core to date in the Western Copper Zone (0.63% Cu, 0.32% Ni) and shows slightly increased Ni tenor, perhaps providing a vector on the mineralization.

Summary of select mineralized intervals from the Eastern Copper Zone:

Further sampling in the Eastern Zone identified several new copper occurrences (0.71%, 0.72% and 0.75% Cu). Some of this mineralization is hosted within ultramafic rocks, which is the first time this lithology has been seen in the eastern Copper Zone. The Eastern Copper Zone is separated from the Western Copper Zone by a structural corridor and the relationship between the two is not yet fully understood by the Company. The high copper to nickel ratio in the east could be the result of the remobilization of copper up through (co-magmatic) fault structures or the result of magmatic segregation.

"Drilling and surface sampling continues to define a very extensive layer of low grade mineralization that is still open in three directions and has tripled in thickness in the down-dip direction. The feeder to the sulphides and higher-grade zones are still proving elusive but we now have a considerable amount of new data to assist in this on-going interpretation and vectoring to the potential source of this large mineralized system," says Northern Shield president and CEO Ian Bliss.

South32 has successfully met its requirement to earn a 50% interest in the Huckleberry project under the Option and Joint Venture Agreement executed in 2016 (see news release June 7, 2016).

The drilling program was overseen by Christine Vaillancourt, P. Geo., the Company's Chief Geologist and a Qualified Person under National Instrument 43-101. Samples were analyzed by ALS Global in Sudbury, Ontario and in Vancouver, BC, for Au, Pt and Pd by Fire Assay with ICP-AES finish and base metals by four acid digestion and ICP-AES.

Northern Shield Resources Inc. is a Canadian-based company focused on exploring for platinum group element ("PGE") and nickel-copper-PGE deposits. It is known as a leader in grass roots exploration for Ni-Cu-PGEs and the understanding of magmatic systems as it applies to exploration.

Forward-Looking Statements AdvisoryThis news release contains statements concerning the exploration plans, results and potential Cu-Ni-PGE and other mineralization at the Company's southern Labrador Trough properties and geological, and geometrical analyses of the southern Labrador Trough properties and other expectations, plans, goals, objectives, assumptions, information or statements about future events, conditions, results of exploration or performance that may constitute forward-looking statements or information under applicable securities legislation.  Such forward-looking statements or information are based on a number of assumptions, which may prove to be incorrect.