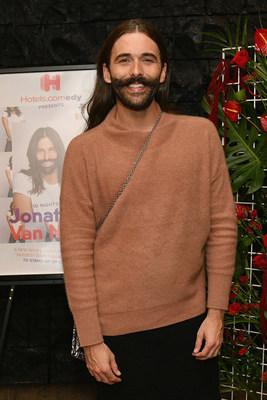 While known for his impeccable grooming and lovable, positive persona, JVN has had his sights set on trying stand-up comedy, and Hotels.com helped him achieve his dream by supporting him on the road for a 10-night tour. From Brooklyn and Washington D.C. to Seattle and Kansas City, JVN brought his cheeky humor, heels and pop culture (1990s figure skating and gymnastics fans, rejoice!) commentary to the stage, giving audiences a reason to laugh and (happy) cry. After each gig, cameras followed JVN to his hotel room to reflect on his performance behind the curtain to see the good, the bad and the gorgeousness.

"Hitting the road with Hotels.com-edy (get it?!) on this tour was a really cute experience for me. I mean, who gets the chance to pursue their dreams while staying in gorg hotels? I learned a lot about myself as a comic, and I'm so excited to continue on this creative process," said Van Ness. "The audiences were stun, and I'm so happy making people laugh and feel good."

Just as Hotels.com rewards its customers with a free* night after 10 nights stayed, the brand celebrated the 10-night tour by rewarding JVN fans with tickets to attend a special "Reward Night Premiere Party" at 1 Hotels Brooklyn Bridge on Nov. 5. Hosted by JVN, the event featured a screening of the first episodes of the series.

"We are thrilled to share our first Hotels.comedy web series with JVN fans. He's constantly promoting positivity and cheering on people on his show. This was an awesome opportunity for us to return those good vibes to him and make sure he was taken care of in fabulous hotels while on the road and slaying his comedic dreams." said Katie Junod, General Manager of the Hotels.com brand in North America. "My advice for watching the series - grab some popcorn and a tissue box!"

ABOUT HOTELS.COMHotels.com is the most rewarding way to book a place to stay. We really love travel and we know you do too. That's why we make it really easy to book with us. With hundreds of thousands of places to stay around the world and 90 local websites in 41 languages, Hotels.com has it all. So, whether you're looking for value in Vegas, treehouses in Thailand or villas in Venezuela, it's all just a click away.  And with our "Reward-winning" loyalty program you earn free* nights while you sleep…what could be better? Booking just got smarter too. With over 25 million real guest reviews and an app so easy to use that it's been downloaded 70 million times, you can be sure to find the perfect place for you.

*Free night does not include taxes and fees.

ABOUT JONATHAN VAN NESSTelevision personality, Emmy nominee, and hairstylist to the stars, Jonathan Van Ness has quickly become known in the entertainment industry for his fabulous, unstoppable energy. It is his belief that great hair is best served with a side of witty banter. Jonathan can be seen starring on Netflix's "Queer Eye," which premiered in February 2018; the hit reboot of the Emmy Award winning series "Queer Eye for the Straight Guy." The show, which is Netflix's first foray into non-scripted, follows the 'Fab Five' as they forge relationships with men and women from a wide array of backgrounds and beliefs often contrary to their own, touching on everything from self-love and faith to immigration. Jonathan shines as the show's groomer, hair guru and self-care advocate. Now in its second season, the hit show has accumulated four Emmy nominations.

In addition to "Queer Eye" Jonathan stars on the Emmy-nominated series "Gay of Thrones," (Funny or Die) a witty social commentary series recapping HBO's "Game of Thrones." Launched in 2013, the series is now in its seventh season and garnered an Emmy nomination in 2016 for 'Outstanding Short Form Variety Series.' The series most recently received another Emmy nomination for 'Outstanding Short Form Variety Series.' Jonathan also continues to work on a passion project, his podcast "Getting Curious," a biweekly exploration of all the things Jonathan is curious about from the history of the Armenian Genocide to the opioid crisis in the U.S.

In 2013 Jonathan launched his own salon studio in LA, Mojo Hair with business partner Monique Northrop.  His celebrity clientele continued to build, working with names such as: Margaret Cho, Denise Bidot, Tess Holliday, Kit Harrington, Jeffrey Self, and Esme Bianco, to name a few. He can also be found on the east coast monthly, taming tresses at Hairstory Studio in NYC on Fifth Avenue.